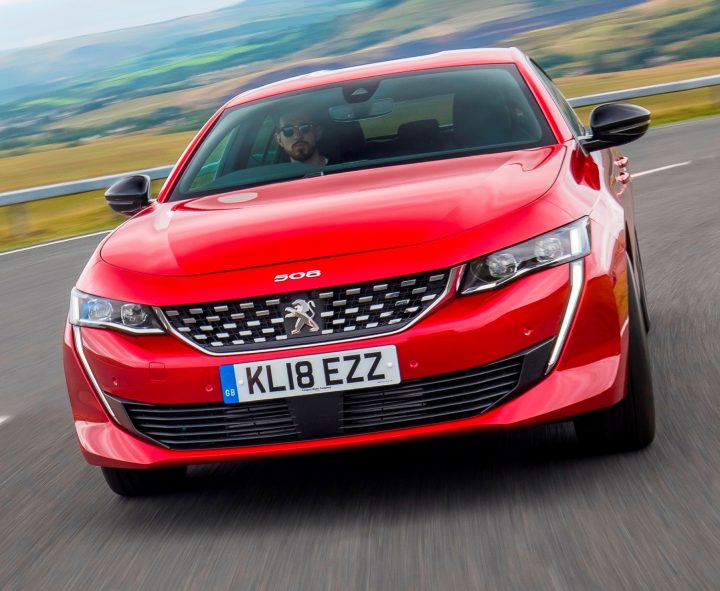 The D-segment saloons and estates have had a tough decade of diminishing desirability, especially if they do not carry a premium brand label, writes David Miles.

Customers have either downsized to newer higher specification hatchbacks and estates that are cheaper to purchase/lease, with lower Benefit-in-Kind taxes and more affordable running costs or have moved to fashionable SUVs.

But there is a world outside SUVs and Peugeot is exploring it with their new D-segment 508 Fastback which replaces the 508 Saloon and SW estates.  A new 508 SW will join the line-up in the first quarter of next year.  The 508 Fastback prices start from £25,000, a shade lower than the outgoing 508 Saloon and rise to a £37,400 and there are lots of extra cost options to push those prices up further. 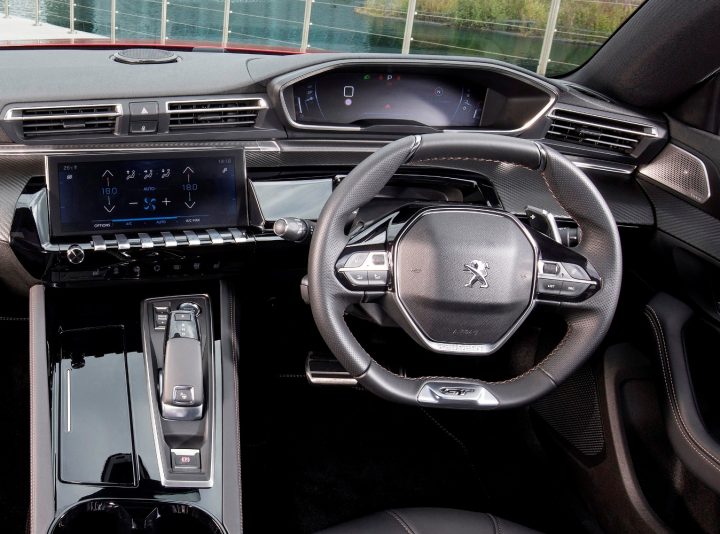 The new 508 Fastback does away with the traditional three-box design of a saloon, instead it is a sleek, dynamic looking hatchback with four frameless side doors and a huge tailgate. Inside there are five seats and Peugeot’s familiar i-Cockpit, small diameter steering wheel, the latest infotainment connectivity, driving aids and safety features all similar in layout to the award winning 3008 and 5008 SUVs.

Simon Broome, Peugeot UK’s 508 product manager said at last week’s media launch, “We have a sales target of around 3,200 units of the Fastback next year and 2,500 for the 508 SW estate which arrives in quarter one next year.”

David Peel, MD of Peugeot UK said the 508 Fastback already has a 35% residual value forecast after three years of ownership and is ahead of models from Audi, BMW and MB.

He said the outgoing 508 models had an average 21% residual value after three years 60,000-miles but the work we have done outlining our new business practises to the companies that predict residual values has resulted in the higher forecast.

He added, “In the past French D-segment cars had been the industry’s Achilles Heel in terms of very poor trade-in values, a situation we at Peugeot have now fixed by not over-supplying the market and doing unprofitable silly business. With the new 508 we are confident it will be a success but I am not going to chase customers at any price.”

The choice of the latest Euro 6.2 WLTP homologated engines are two 1.6-litre PureTech turbo petrol units with 180 or 225hp outputs and both are matched with an 8-speed automatic gearbox.  The greater proportion of sales will be for diesel powered models and the engine options are 1.5-litre BlueHDi 130hp manual and automatic, 2.0-litre Blue HDi 160hp and 180hp and both with 8-speed automatic transmissions as standard. All engines have S&S (stop/start) as standard.

At last week’s UK media launch my new 508 Fastback test drive model was the GT specification version with the BlueHDi 180 engine which actually has a power output of 177hp. It is matched with the new smooth changing PSA Group’s 8-speed automatic gearbox. The price is £36,400.  With 295Nm of torque from 2,000rpm this is a strong and responsive unit and quiet as well. Its power delivery, albeit a diesel, is in keeping with the sports styling of the new 508 Fastback. 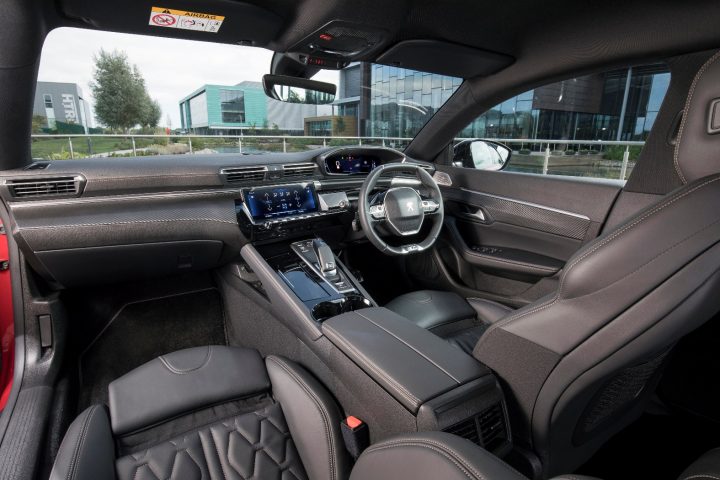 Despite its Fastback design with its long sleek body, wide muscular stance and low-ish roof height, the new 508 felt suitably roomy although I would have liked a lower driving position. There was some concern about blindspots caused by the front thick A pillars, the wide side B-pillars which really restricted vision at junctions and the rear corners and steeply raked tailgate window also reduced visibility.

Fortunately the GT spec comes with a host of driving information system such as blindspot monitoring and 180-degree rear view camera and parking sensors.

Despite these niggles the interior design with its twin cockpit front seat layout is impressive. There are loads of infotainment and connectivity functions and sat-nav and all are displayed by the well integrated 12.3-inch digital head-up display and 10-inch wide touchscreen.  My usual complaint about too many functions being operated via the touchscreen – heating and ventilation for instance, still apply to this newcomer. There is the usual new-age Peugeot perceived high quality materials used throughout the cabin and they seem well in keeping with the recognised premium brand competitor models. 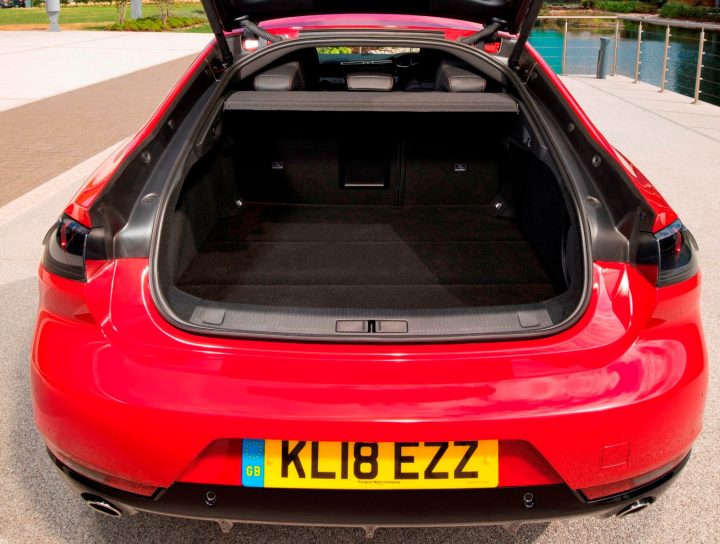 The handling was generally well behaved and the ride compliant, even riding on the 19-inch GT spec alloy wheels, with various driving and suspension settings to choose from to tailor to the high mileage company car driver’s requirements.

The seats especially have been designed to minimise long distance travel discomfort and on GT and First Edition models the wraparound front seats have as standard an eight-pocket massage system.

Overall the new Peugeot 508 Fastback looks good with its sporty kerb appeal all supported by good standard specification and of course those extra cost options to tailor the car to the driver’s individual needs and pocket and there is a wide range of engine options. 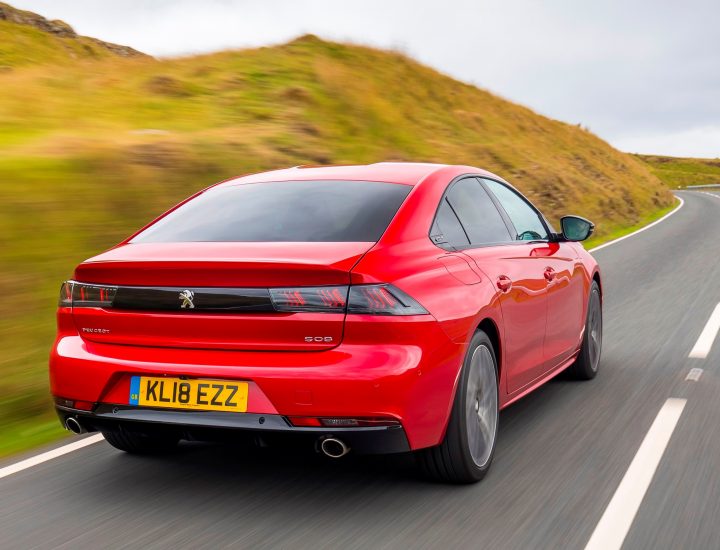 The D-segment is a really tough and competitive shrinking market sector, but good looks still sell and the 508 Fastback certainly has those outside and in. Whether the new 508 has the ‘clout’ to worry the premium brands with their competitor models, given Peugeot’s stance on not chasing unprofitable silly fleet business to protect those all important residual values, is doubtful but it deserves to succeed.

Against: Some significant visibility blindspots from the driver’s seat, some basic controls – such as the heating/ventilation system have to be made via the touchscreen, has to compete in a very competitive market sector where discounting is rife even by so-called premium brands, ungenerous warranty.