You are here: Home / Finance / Company cars / Europe is turning its back on diesel, says JATO

The decline in diesel sales is accelerating across Europe.

The European car industry had a solid 2017, with new registrations totalling 15.57 million, an increase of 3.1% when compared to 2016 and the highest volume of registrations since 2007 when 16.02 million units were registered but there is still concern over the results of the UK, according to the latest annual summary by JATO Dynamics. 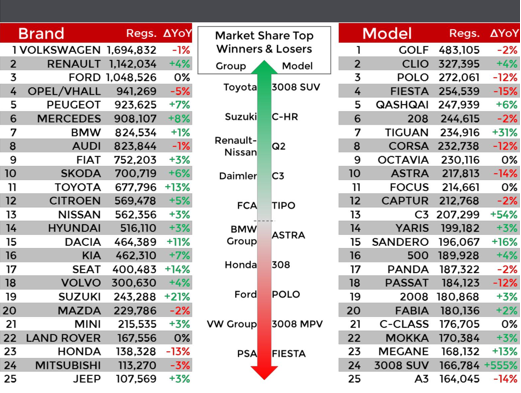 Despite the encouraging results, the issues faced by the industry including the diesel crisis and Brexit had a negative impact on growth, which slowed down to just 3.1% – a decrease on the 6.5% and 9.3% volume growth experienced in 2016 and 2015 respectively.

Disappointing results for December represented the lowest registrations for the month in five years, which indicates that the industry could be slowing down. This was exemplified by registrations of diesel vehicles, which decreased by 20.5% in December 2017.

In fact, the downward trend in diesel impacted full year figures for 2017 too, with diesel volumes falling by 7.9% to 6.76 million units, data excludes Hungary, accounting for just 43.7% of total registrations in 2017. This is the lowest market share for the diesel segment for 10 years.

Gasoline cars were able to benefit from the decline of diesel, growing by 10.9% – an increase of 760,000 units. Comparatively, AFVs accounted for only 4.8% of registrations, a total of 737,400 units, which was a volume change of 46.1% on the previous year. These registrations were split between hybrid technology, electric and plug-in vehicles. 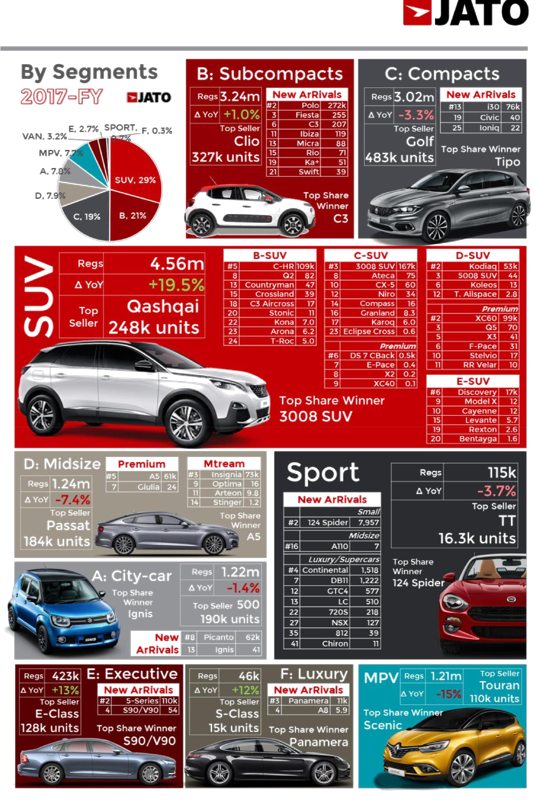 SUV sales are storming ahead of other sectors.

A sharp contrast to 2007, when SUVs represented just 8.5% of market share. This growth was possible thanks to the strong performances of the D-SUV, C-SUV and B-SUV sub segments, which grew by 34%, 21% and 17.5% respectively.

The monumental growth of SUVs impacted the MPV segment, as MPV registrations decreased by 15.1% in 2017 – the lowest market share of the century,” commented Felipe Munoz, Global Automotive Analyst at JATO Dynamics.

The VW Golf was Europe’s top selling car, the Nissan Qashqai led the burgeoning SUV sector again while the Renault Clio was the most popular hatchback.