You are here: Home / Motorsport / Motorbikes / Bike racing legend in Wales this weekend 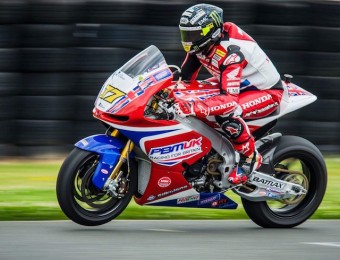 Victory in this year’s premier Senior TT as well as the Zero TT for electric bikes took his tally of race wins on the island to 23, just 3 short of 26 held by Northern Ireland’s Joey Dunlop.

McGuinness also set a new lap record, completing the 37.73 mile course at an average speed of 132.701mph. Now he will take on a different challenge, tackling the 0.9 mile course in the heart of Aberdare town on some of the fabulous historic machinery from the Phil Morris Racing collection of race bikes.

Among the other guests at the circuit will be one of the first non-Japanese riders ever to ride a works Honda race bike, Northern Ireland’s Tommy Robb, also a TT race winner.

On a lighter note, Graeme Hardy will be at the park with his tribute to George Formby and his 1935 film set at the TT races, “No Limits”. Graeme has re-created the bike that Formby rides in the comedy film, the Shuttleworth Snap, and both bike and rider will be at Aberdare Park, Graeme with his little ukulele in his hand.

Of course the serious part of the weekend’s events will be the two day race programme and leading road racers from across the UK and Europe will be on hand to compete with local favourites including Jay Bellers Smith, from Merthyr Tydfil, who will be going for victory in the weekend’s premier races on board his 675cc PRC Motorsport Triumph.

Matthew Rees, meanwhile, is rapidly establishing a reputation as an up and coming young road racer with some impressive performances on the Isle of Man and there is nothing he would like more than to claim victory in his home town of Aberdare.

In addition to the racing and the display laps, there will be a public parade of road bikes and a full range of trade and club stands.

Racing starts at 9am each day with admission for adults £12 per day or £23 for the weekend. Admission for children aged 13 to 16 accompanied by an adult is £5 and senior tickets are available for £6. A one day family ticket for two adults and two children costs £25.