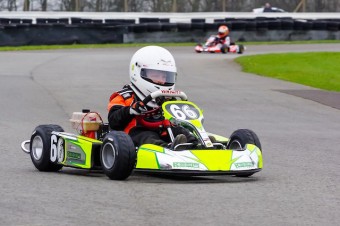 Although the weather was a little on the wintry side, action at round two of Llandow Kart Club’s 2015 championship kept everyone warm as a large entry produced exciting racing without a single red flag or unnecessary delay.

Numbers were given a healthy boost thanks to the inclusion of both the NKRA classes and smattering of visiting drivers getting experience of the South Wales Karting Centre circuit, with a first-ever grid of Junior X30s and massed Bambinos both notable inclusions in the line-up.

The finals proved to be some of the most exciting for a long time, with the action given the added intrigue of an ever-evolving surface that saw the advantage swing back and forth between wet and slick-shod runners as each race took to the track.

No fewer than 15 Bambinos took to the track, including Llandow stalwarts Nathan Browning and Ella Stevens. Both gave a good account of themselves, but could do nothing to deny Chance Bennett (above) a clean sweep of fastest times. Stevens ended the day in second spot, ahead of Alfie Briggs and Brandon Carr, with Browning edging Oliver Wright for fifth. Cameron Crockett and Ryley Price, who both appeared at Llandow in February, were eighth and ninth respectively.

The Cadet Honda entry also took a return to the sort of numbers seen in recent seasons, with 22 runners. February runner-up Alex Lloyd took first blood with victory in heat one, before Kieron Jermey and last month’s outright winner, Oliver Clarke staked their claim in heats two and three. Clarke again came out on top in the main event, edging Lloyd by 0.120s to reprise their February battle.

Guy Cunnington came through to complete the podium, ahead of Henry Laws and Jermey, but another couple of laps could have turned the result on its head with slick-shod sixth-placed driver Oliver Bearman clearly faster than those ahead of him as the track dried.

While the Honda entry would have been enough to warrant the Cadet categories being split, 14 IAME runners merited track time of their own – and were equally generous when it came to sharing race wins. Dexter Patterson got the ball rolling in heat one, before Albert Carter and Taylor Barnard came good in the remaining qualifiers.

The Final, however, again came down to tyre choice and saw Patterson return to the fore, pulling out a decisive 6.5secs cushion as wets proved to be the answer. The closely-matched group of Brad Kenneally, Carter, Llandow regular Shay Keough and Barnard – who were covered by 0.2secs – battled over the remaining podium positions.

By contrast, the Junior Honda class belonged to one driver all day, with Ben Cutler sweeping the meeting despite the best efforts of Alex Wilkins and novice Finley Green. 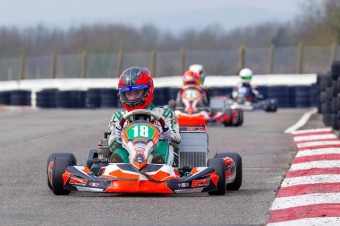 Philip Hanson denied Brown a clean sweep by taking victory in heat three, while Callum Bradshaw was always in the mix.

The TKM runners – we can’t say ‘boys’ thanks to the inclusion in the field of Susanne Gutzold – shared their heat wins between Hugo Holmes, Lewis Griffiths and Louis Beaven, before Ryan Edwards trumped them all in the main event, heading Holmes and February winner Alex Rees on the podium.

With Junior Rotax still absent from the running order, the younger half of the programme was completed by the visiting Junior Blues and, despite being a little slimmer in number than previous years, the racing still proved competitive. It also appeared to be going the way of Jake Calvert after he claimed all three heats, but the Final was another matter, as a the frontrunner’s choice of slicks proved to be the wrong one. With the top two finishers being disqualified for technical infringements, the honours eventually went the way of Thomas Massarella, with Calvert a distant second and Lee Chamberlain completing the podium.

A changing of the guard has been creeping up on Senior Honda for some time, but was finally confirmed this weekend as the new wave of drivers dominated. Monty Gorringe and Kristian Prosser claimed the heat wins, and the former’s superior haul was confirmed in the Final as he narrowly held the upper hand over his rival, although the pair remained separated by just half a second at the chequered flag. Tom Ford and Patrick Hill, who have followed Gorringe and Prosser into the senior ranks in past year, finished third and fourth, while Roberto Nardone and Nigel Vickery did their bit to uphold ‘senior’ honour from a comfortable distance.

Senior Rotax also saw a former junior champion making his mark, with Rob Ellis leading from the front in each of the day’s four races. Sam Morgan, Scott Rose and Dilip Singh took it in turns to give chase through the heats, before Morgan returned to P2 to give Ellis his closest battle of the day in the main event. Gareth Taylor edged Singh for the final podium spot.

The Rotax field was joined by  three TKM Extreme entries, with Nicholas Rees only denied a clean sweep by problems in heat three. Callum Johns picked up the pieces on that occasion and later claimed second spot in the final, ahead of Alex Lewis.

Formula Blue guested amongst the senior classes, with a number of familiar faces returning for their annual assault on the Llandow circuit. Chris Derrick and Ian Branfield shared the heat wins, before the latter equalled their tallies at two apiece, by coming out on top in the final.

It may have been a different story had tyre choice not again been crucial, with Matthew Parr and Kevin Ford completing the podium and Derrick only coming home in eighth spot.

Round three of the Llandow Kart Club championship will take place at South Wales Karting Centre on Sunday 19 April 2015.