You are here: Home / First Drives / Benchmark Beemer is very significant – especially for its rivals 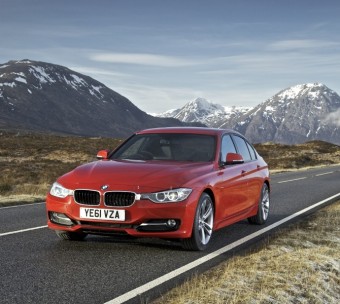 An all-new BMW model is always a notable event but when it comes to the iconic 3 Series that is even more important and significant, especially for their competitors.

The new 3 Series Saloons are being delivered to customers from 11 February and around 25,000 units are available this year.

The 3 Series is the benchmark for the premium brand D-Segment (upper medium) and in 2011 finished in eighth position in the UK’s top ten new car sales chart, the only ‘premium’ brand car of its size to do so.

The first body style to arrive of the new sixth generation 3 Series is the highest selling version, the four door Saloon and this will be followed by the Touring estate towards the end of this year, the Coupe early in 2013 and the Convertible at the end of next year.

Also arriving towards the end of this year will be four-wheel drive and petrol/hybrid powertrains.

The all new 3 Series Saloon is larger, more spacious but more fuel efficient with lower CO2 emissions, more nimble, certainly more comfortable with a better ride quality and only marginally more expensive than the models they replace.

Prices start at a headline grabbing £24,880 and currently rise to £37,025. When other variants are added the price spread will be even more.

To give a fair reflection on what is a realistic price example; the likely best selling Saloon will be the 320d Sport 184hp version with a CO2 figure of 120g/km and costing £29,080. This version will take around 25 per cent of all Saloon sales.

However there is the possibility that the new 320d EfficientDynamics variant with 163hp and CO2 emissions of only 109g/km might prove a better buy for companies because being less than 110g/km it allows businesses to write-off 100 per cent of the cost of the car against tax. The price of this version is also cheaper at £28,080. All diesel powered 3 Series Saloons carry the lowest 13 per cent level of Benefit-in-Kind tax cost for a diesel car.

At launch the new Saloon is available in 320d EfficientDynamics and 320d diesel forms and with 328i and 335i petrol engines. Three further engine options arrive in March, the 316d and 318d 2.0-litre diesels and another version of the 2.0-litre turbocharged petrol engine – the 320i. All models in the new 3 Series range have BMW’s much applauded EfficientDynamics technologies and this includes stop and start and a new eight-speed automatic gearbox is available across the range.

One of the main drawbacks to the previous 3 Series models was the lack of rear seat legroom. This has been rectified as the new generation is a shade longer but more importantly has a longer wheelbase, now 2,810mm, an increase of 50mm and the all new platform has wider tracks, 37mm at the front and 47mm at the rear. The extra dimensions improve the legroom and allow easier access to the rear seats.

Also the balance and handling of the car is improved and the ride comfort with suspension tuned for UK roads is significantly better, even though run-flat tyres are fitted as standard.

There is a wider choice of specification levels, ES, SE, Sport, M Sport, Modern and Luxury. Each has a distinct character and with a long list of extra cost options there are increased opportunities for individualisation – the same sales programme that has done well for MINI under BMW’s ownership.

When it comes to saying which will be the most popular trim, BMW say Sport will take 25 per cent of sales, a number that could be matched by M Sport with the remaining 50 per cent likely to be divided equally between the other levels.

Outside the styling changes continue the ‘more polished’ and grown-up theme. The new 3 Series retains the athletic and dynamic stance but it looks lower and wider thanks to the increased front and rear widened tracks and curvaceous wheelarches.

The bonnet and the sides are deeply sculptured and from the side the front looks lower to the ground giving the side profile a wedge shape.

The waistline is lower, the roof higher for more rear headroom and the side windows are larger and the wider rear doors improve entry.

Inside there is the usual array of equipment depending on the trim level but electrically operated windows/mirrors, air conditioning and so forth are standard. 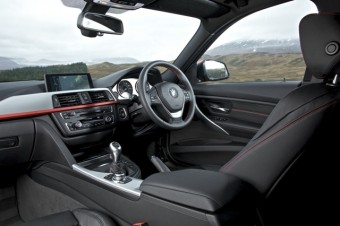 Where fitted the sat/nav is sharper with its responses and there is a Multimedia option which includes BMW Assist and a list of other communication functions including an Internet facility. Also improved is the ambience within; it feels a class above the outgoing models. It is more polished and a better rounded product overall with more choice of specification and equipment. This should all mean more customers and conquest sales from Audi and Mercedes-Benz because BMW has at last addressed the only real criticisms of the previous model.

During the press launch test drive programme on the narrow and winding roads in the mountains behind Marbella and Malaga in Spain, the 320d Sport, 2.0-litre, 184hp, turbodiesel engine with the six speed manual gearbox and the new 328i, 2.0-litre turbocharged 245hp petrol unit with the new eight speed automatic gearbox were available. The potential business and fleet sales 320d EfficientDynamics turbodiesel unit emitting only 109g/km of CO2 has yet to arrive so that will be one to try later.

The 328i direct injection, variable valve timing, twin scroll turbocharger petrol unit replaces the six-cylinder 3.0-litre engines in the previous 325i and 330i. It has inherent advantages in weight and fuel consumption, yet with zero to 62mph taking 5.9 seconds and a top speed restricted to 155mph in manual form it is quicker than either.

This 245hp, 350Nm engine in manual and automatic forms has fuel economy of more than 44mpg and CO2 emissions below 150g/km. In real-life driving this new unit is a really good example about how downsizing in engine capacity and the number of cylinders really works with the addition of turbo power.

It is free revving, gutsy, but perhaps not with the actual feel of ‘grunt’ or smoothness under hard acceleration a ‘six’ offered but the fuel saving are first class. Against the official Combined Cycle figure of 44.8mpg for the automatic model, my test drive up and down steep mountain roads was a creditable 35.2mpg and on our flatter UK roads it will be even better. 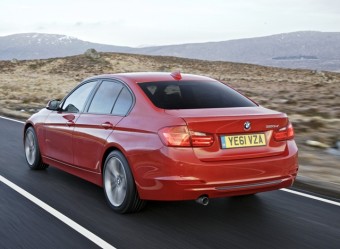 The test car had the new Modern trim, not sure it is to my taste, a bit retro with imitation tree bark patterned inserts in the fascia and door cappings. Overall the interiors of the new 3 Series have improved without any question so it is down to pure taste.

Core best selling model, the 320d Sport with a six-speed manual gearbox offers 184hp and 380Nm of torque and it is a unit we already know well. Perhaps it is not quite as polished noise and vibration wise as one or two new generation turbodiesel units of the same capacity but it isn’t by any means raucous.

Officially this responsive unit will return 61.4mpg with the manual gearbox and my test drive resulted in a very impressive 46.6mpg, given the severity of the roads. CO2 emissions are 120g/km so the VED road tax is £0 in the First Year and £30 per annum after that. Company car tax is 13 per cent, the lowest rate for any diesel car.

The BMW Drive Performance Control called Eco-Pro with comfort, sport and sport+ selectable modes is a useful standard fit feature that the driver can use to tailor the response they want from the vehicle – even down to the most economical driving settings.

In all areas where the 3 Series Saloon needed improvements it has received them, rear legroom, a better and more compliant ride, better interiors together with the on-going programme of bringing more power, better fuel economy and less CO2 emissions. It was the best in its class, it’s now even better and a very tough benchmark model for other premium brands to try and match.

For: The new 3 Series has bettered the best, which was the previous generation, brilliant to drive, more polished and rounded performer from nose to tail, significantly more comfortable, sharp and agile handling, more rear seat legroom, beautifully built.

Against: Some radical choices of trim finishes for top spec models – choose with care to suit your era.