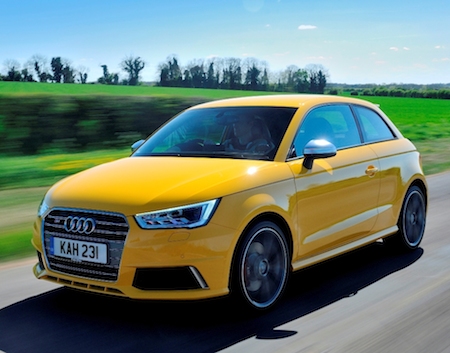 With five consecutive record years of UK new car sales behind them Audi is now the established leader of the premium car brands.

The growth of the brand’s popularity can be accounted for in part by the expansion of their model range, 17 to 50 in 13 years – the latest being the   S1 quattro three door hatchback and five door Sportback ‘supermini’ sector high performance models.

Introducing the new cars to the motoring media this week Andre Konsbruck, the recently appointed new head of Audi in the UK said, “Our performance is all about ‘real sales’ no distress selling  and customers like our strong image for the models we offer ranging from our smallest A1  to our executive limousine A8.   For the first time we are bringing our famous quattro brand into the premium supermini sector with these additional S1 variants.”

When the new Audi S1 duo of three door hatchback and five door Sportback quattro ‘supermini’ variants arrive in UK dealerships at the end of May, priced at £24,905 and £25,635 respectively, they will be the only cars of their size to offer 4WD making them the most potent sub-compact currently available claim Audi.

The new S1 takes its name from Audi’s iconic World Rally Championship (Group B) winning car of the mid 1980s with its five-cylinder turbocharged petrol engine with power outputs varying from 470 to 590hp and of course with quattro all wheel drive.

Audi see the competition for the S1 as the MINI JCW, Ford Fiesta ST and Citroen DS3 Racing but realistically in this high performance and expensive sector the VW Golf GTi/R and BMW M135i models will be also be on customer’s radar.

Who will the customers be?  Chris Batty, Audi’s UK brand manager for the A1/A8 ranges said, “We anticipate customers will fall into two types.  The first being 25 to 35 year old singles or couples buying their first S model which is more affordable than the larger S3 version of the A3 family.

“The second group of customers will be in the 45 to 60-plus age group, empty nesters that enjoy motoring and probably the S1 will be the second car in their garage.”

As far as UK sales of the new S1 models, as usual for a VW Group family members no forecasts, but it is estimated that 5% of A1 sales  in a full year will be for the new S1 quattro models (around 1,200 units) with the three door version being marginally (55%) the more popular.

The S1 is an important car for Audi as it will be the first step for many customers wanting something more than a standard performance car.  It’s a halfway move before going to the full RS even higher performance versions available on some models in the extensive Audi range, but such is the power output of the S1 and the size of the car that no RS version is planned.

The engine response is well balanced right through the rev range and even at the maximum legal top speed limit there is still much more available in top gear. 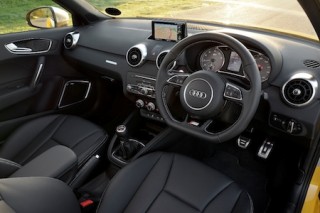 The engine performed well at low speeds so it is not just a ‘hot hatch’ for the open roads. It coped very well in a refined way with the usual stop-start traffic in urban driving conditions and once the open road appeared it was an effortless matter to get past slower moving traffic in the shortest possible time without having to go through many gearchanges.

On my brief test drives using winding Cotswold A/B roads the three door model returned 31.8mpg and the Sportback 31mpg.  The quattro system gives permanent all wheel drive traction shuffling the power to the individual wheels with most grip through the electronic torque control.

The multi-plate quattro system clutch is mounted on the rear axle to aid weight distribution of 60% at the front and 40% at the rear for optimum handling ‘balance’.  A new four-link rear independent suspension is used to accommodate the rear elements of the drivetrain.

The S1 is fitted with S-specific sports suspension configured for this supermini sized model and with 2 and 4mm wider tracks front and rear. 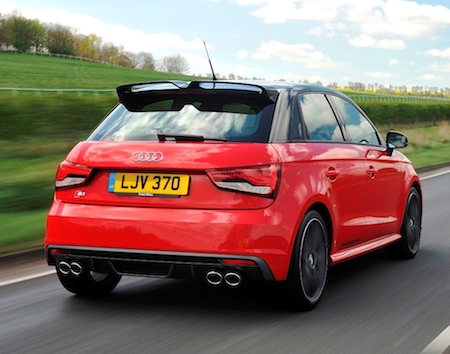 Damper settings are adjustable via the Audi Drive Select system which appears for the first time on a car in this category.

The Drive Select function also allows the driver to vary the response of the throttle and the climate control across a number of settings to refine performance. These settings are Auto, which I found the most useful, Dynamic and Efficiency.

Yes the ride was firm but not uncomfortable thanks to the supportive sports seats and the optional larger 18-inch wheels didn’t appear to compromise the ride comfort or handling.

What impressed me most was the balance of the car, heavy enough at the front to give good steering feedback and sharp-turn in for fast cornering speeds and stable under hard acceleration or braking especially on wet roads.

On my three door S1 test car which started at £24,905 on-the-road with a range of options the price added up to £28,835 and the similar upgraded Sportback version was £29,455.  Big prices for a big performance small car.