You are here: Home / Motorsport / 2020 / Anglesey Circuit pushes off with motorcycle season 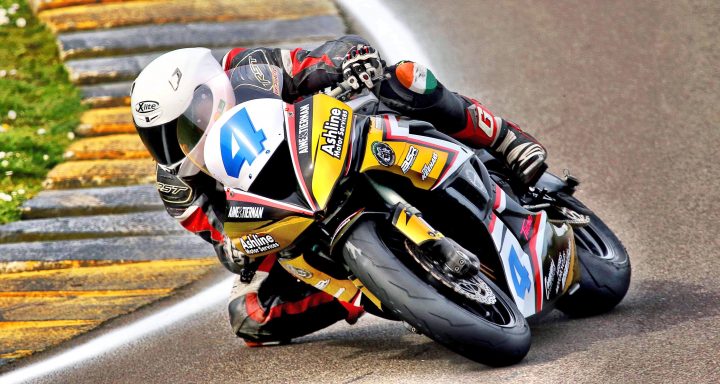 In recent years this first race weekend of the year has comprised a day of testing on the Saturday and a race-day on Sunday. This year, however, both days are race days in line with the club’s ‘Racing for Sport’ format. Each of the bike-category classes will have four races, over 10 or 12 laps. Each race will count towards the Club’s 2020 Championships, and the second and fourth races will be ‘trophy races’.

There will be a broad base of machinery on track, including Powerbikes, Pre-Electronics Powerbikes, Formula 600, 650 Twins, 100 – 500cc Allcomers, Pre-Injection 501-1300cc, Golden Era Supersport, Forgotten Era including Classics up to 500cc and Open Sidecars.

2018 Formula 600 champion Chris Eden is expected to sit on the sidelines this season, and nearest rival Adrian Kershaw has also moved on, so the championship will be wide open with the returning Barry Dimelow and popular Irishman Eoin Collins possible favourites. This weekend, however, there will be stiff opposition from a few ‘visitors’ – Jamie Coward, the top newcomer in the 2019 TT, Manxman Nathan Harrison, the 2019 double Manx GP winner, and Irishman James Chawke, the winner of the Junior Manx in 2018,

In the 100-500cc Allcomers class, Andy Jackson on his Moto3 Honda will again be the favourite for the championship, but we can expect a battle royal behind him with the returning Paul Tye, unbeaten in the Forgotten Era class in 2018, Stephen Kennedy and Cliff Washbrook the ones most likely to pick up the podium places.

In 2019 the Golden Era Supersport class provided some excellent racing, especially between the top two – Simon Robins and James Leatham, with Damian Davis always in contention. The Club’s many-times champion Tim Bradley was side-lined for most of last season through injury but he returns this weekend and probably starts as the championship favourite. The Twins will share track-time with Golden Era Supersport and Phillip Morris and Max Dixon are the best-placed from 2019 returning this weekend. However Jamie Coward, Stephen Parsons and Liam Chawke, ahead of their TT and Roads seasons, will take some beating. With the class limit extended to 1000cc, it will be interesting to see how Hefyn Owen (750 Ducati) and Ian Thompson (1000 Aprilia) fare.

In the Powerbikes class the 2019 top three, Graham Hornby, Joey Taylor and James Chawke, are all back, but it will be good to see four riders returning this meeting, who are likely to feature strongly – Manxman Ryan Kneen, former W100 Pre-Injection champion Joe Ravenscroft, former W100 Twins champion Barry Furber, and Stephen Parsons, twice runner-up in the Manx GP. Moving on to the Pre-2009 Powerbikes championship, where both the champion and runner-up are absent, Gerallt Ellis, 3rd last year and Stephen Tomlinson, 5th, could well move to the fore and South African Mark Bainbridge returns after a few years absence and is no slouch.

Moving on to the older machines, in 2019 the Forgotten Era class saw Ian Riley and Phil Millard have a titanic battle upfront, but they no doubt will be fearing the worst with Tim Bradley back on the grid this year. In the Pre- Injection class the entry is much changed from last year and it could well be that James Leatham (3rd last year) or Matt Stephenson (5th) could be dicing for the race wins this time.

In the Open Sidecars races the favourites are likely to be two, remarkably young, contenders for honours in the 2020 TT races – Ryan & Callum Crowe, with a best of 5thlast year and Lewis Blackstock & Patrick Rosney, with a best of 6th. Amongst those joining them on the grid will be the top two crews in the 2019 W100 series, champions Stephen Markland & Owen Rigby and runners-up John Shipley with Andy Hayes.

Finally, in the Senior and Junior Open shake-ups on Sunday, we will see the Powerbikes and the 600’s racing together in the Senior, and then a selection of smaller bikes and novice riders in the Junior. Hopefully these races will be an enjoyable end to a good day’s racing.