The fuel cell is the only technology which will provide a sustainable automotive industry in the long run, according to the head of research for Kia Motors FCEV team, Dr Saehoon Kim.

The Korean manufacturer is the country’s oldest vehicle maker and is pouring millions of dollars into research to develop the models of the future, notably using its advanced fuel cell – first invented in 1839 by a Swansea-born scientist – in order to reduce cost and make it affordable for motorists.

He says the automotive industry is facing a real struggle to cut exhaust emissions to levels demanded by politicians and governments around the world and it’s going to become progressively harder to meet legislation.

Dr Kim said it is Kia’s view that current battery technology will be unable to meet the needs of motorists in future when legislation will virtually outlaw the internal combustion engine. “Batteries have an issue over their range and recharging,” he said. “This will make them unsuitable for anything other than comparatively short distances.

“But a fuel cell electric vehicle will have a range and performance broadly similar to petrol and diesel engines of today and its refuelling will take about the same time as we are used to now.”

Dr Kim was speaking during a visit to Kia’s advanced engineering centre in Mabuk near Seoul where he heads hundreds of engineers looking at future powertrains, technologies and systems and who work with car designers shaping the models of the future for the company.

“The real advances for the FCEV will be in trucks and buses using them because they have higher demands on load and distance which cannot be matched by big-battery power and as the lessons and costs of developing these feeds into the industry it will become more affordable for the cars of tomorrow.”

He went on, ”That’s why we are getting lots of requests from logistics companies to provide trucks with fuel cells.”

The outspoken engineer said some car makers were considerably ahead of rivals because they had looked at electric vehicles and developed them as hybrids over two decades ago but even these were likely to be overtaken by the hydrogen fuel cell models now being developed.

German locomotive engineers are close to introducing a hydrogen fuel-cell powered train which does not require costly infrastructure changes to build power lines, and scientists are working on making the transport of hydrogen as easy and safe as traditional petrol and diesel.

Hydrogen is the most plentiful product in the universe and can be found in abundance, which will make it much cheaper than generating electricity alone to power cars, trains, boats or through rival fossil fuels. Importantly, it is not subject to any supply issues due to political or production interests in the way of oil, gas or coal products.

Dr Kim said it requires the will of scientists, engineers, politicians and business to embrace hydrogen as the future fuel because its supplies are limitless and best of all it does not produce any harmful emissions from a fuel cell.

He is confident that the known weakness of FCEVs, the contamination or “furring up” of cell plates over comparatively short periods of typically four years will be overcome very soon. This issue currently means fuel cell efficiency gradually degrades and involves a costly replacement but he sees a time coming when the contamination will be addressed and a replacement cell stack is fitted in a routine major service, much like vehicles undergo now, and at a reasonable cost.

Another issue of the water system freezing in cold weather and needing thawing out is being addressed and he believes is very close to being solved for drivers in more extreme locations. They have run tests to get FCEVs starting within 30secs in -30Deg C temperature and instantly at -10Deg C.

Powertain designers have learned from early FCEVs and future models are likely to have smaller hydrogen tanks, a more efficient stack and invertor motor to transfer the electricity to the driving wheels and this will see the additional weight of the vehicles being reduced as well. 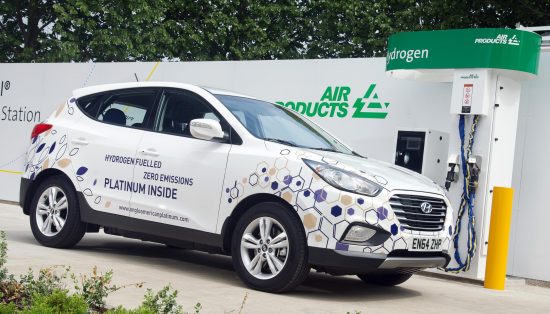 Dr Kim said all the progress being made in research centres such as Mabuk depended on a comprehensive infrastructure to deliver hydrogen to its users and he believes this will be built initially around the demands of long distance operators such as fleets.

The rise in numbers of plug-in electric vehicles and pure electric vehicles over coming years will put increased demands on providers to install charging points at homes, businesses, filling stations, shopping centres and other locations.