After standing on the BRC podium no less than three times this season, the London-based rally driver had never managed to take his Pirelli-shod Skoda Fabia onto the top step. 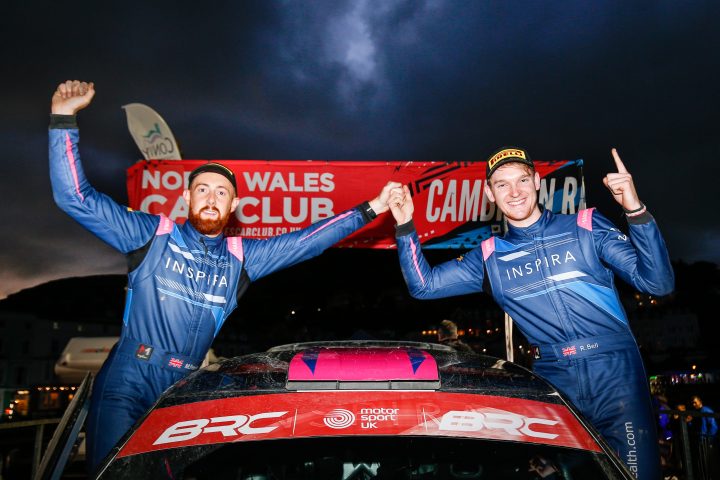 But a stellar performance across the treacherously muddy and North Wales stages, saw Bell (above right) and co-driver Max Freeman finally claim the honour to end their BRC campaign on a high.

After taking the BRC lead across the opening gravel test of the rally on Saturday morning, Bell would never look back and would go on to battle with World Rally Championship ace Oliver Solberg for the overall rally win.

Whilst Solberg would dominate, his focus was that elusive British Championship victory and the 22-year-old returned a mature performance over the closing stages to take an instrumental win.

“It’s been such a difficult weekend out on the stages and we have had three podiums on the trot now and so to end our year with a win is just phenomenal,” said a delighted Bell.

“It’s been a fantastic season for us [in the BRC] and we have progressed with every single rally. We have really managed to put it all together this weekend and I must say a huge thanks to our sponsors and backers for all their support to help me get to this point, and they have all been instrumental in this result.

“I’m very excited to continue to grow and improve and see what next season holds for us”.

Rob Wilson (above) scooped a stack of major Motorsport UK Pirelli Ravenol Welsh Rally Championship titles after a stunning display on the Visit Conwy Cambrian Rally saw the youngster collect the OnThePaceNote.co.uk supported Welsh Junior title, the Ravenol Welsh Challenge title, the class W13 crown and finished runner-up in the overall drivers’ standings – having started the final round in fifth.

It marks a remarkable turnaround for the 19-year old Herefordshire driver, whose entire rally season was put in jeopardy when he rolled his Ravenol-backed Mitsubishi Evo 7 in pre-event testing.

The finale to the season was almost as dramatic, as Wilson had a worrying noise coming from his car’s gearbox right from the start of the Llandudno-based event. Despite this distraction, he and co-driver Richard Crozier were fourth in the Pirelli Ravenol Welsh standings at half distance – and moved up to second after a brilliant run through the repeat of Clocaenog, Brenig, Alwen and Penmachno forest stages.

There was no stopping Matthew Hirst/Declan Dear, who had already been crowned the overall 2022 Pirelli Ravenol Welsh Rally champions, from winning once again in their Pirelli-shod Delta Salvage Ford Fiesta R5+ (although they did bounce off a tree, surviving with minor damage) – but this time the applause went to Wilson/Crozier on their truly outstanding season, which saw them win the Welsh Junior section five times from five starts.

“After an amazing debut season in a four-wheel drive car it all came down to this – and an incredible final result,” said Wilson.

“The Cambrian was not easy as we were hampered by a gearbox issue and we seriously did not think we would make it through the day. Thank you to Richard [Crozier] for an incredible season, as well as dad and Sam for all their efforts on and off events.

“We knew it was possible to win the Welsh Junior, Ravenol Welsh Challenge and the class W13 titles, as well as finish runner-up in the overall points standings, and we pulled it off. A big thanks to everyone that was involved in the season.”