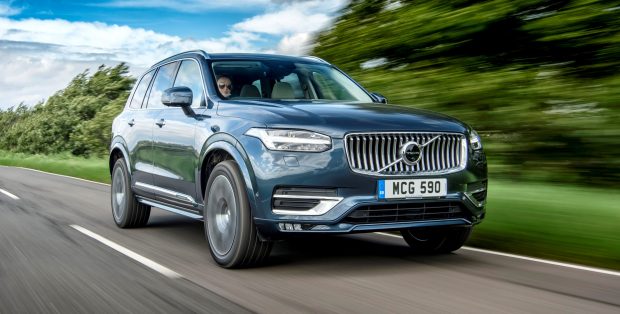 If you asked anyone to name three famous Swedish icons I bet you’d hear them mention Volvo.

Whether that came before or after ABBA and IKEA is debatable and older generations may substitute SAAB somewhere, but the fact is Volvo has become more than a car brand.

It’s a global representation of Sweden and the Swedes tend to do things differently, their own way, with a particular style and flair which shows up very well in the second generation XC90.

This seven-seat flagship for Volvo was launched in 2014 using a pioneering scaleable platform and it was updated in May 2019 to include the latest chassis and interior technologies to redefine Volvo’s place in the premium cars sector so keenly fought over with British or German rivals and American models in some markets.

For me, however, in the premium cars sector, Volvo stands out with its big SUV XC90 series with its external and internal simplistic shaping, style and sophistication. It unobtrusively does what rivals intrusively do.

The latest range includes mild hybrid diesel powertrains and even a “twin-engine” plug in hybrid, but I wanted to see how its pure petrol model stands up against rivals. It does, very well. 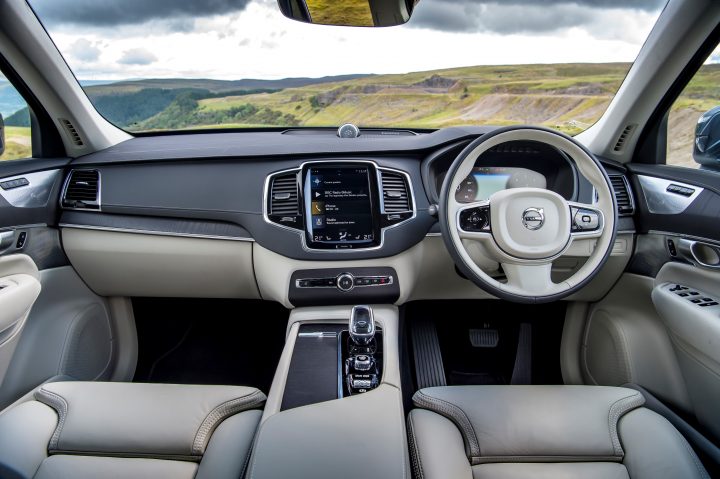 The XC90 all-wheel-drive comes in three trims: Inscription, Momentum and R-Design, a choice of petrol, diesel and electric/ petrol power from around £52,200 to £72,000. It is in the powertrain where you see some significant figures as the 235ps 2.0D is joined by a 250 or 310ps petrol unit as well as their halo 390ps electric/petrol 2.0.

Combined the options and packs on the test car pushed its on-road price over £71,000 and that’s into the megatax bracket, but lets be realistic, rivals can easily cost that much and more and if you can afford it the tax take is not that significant. 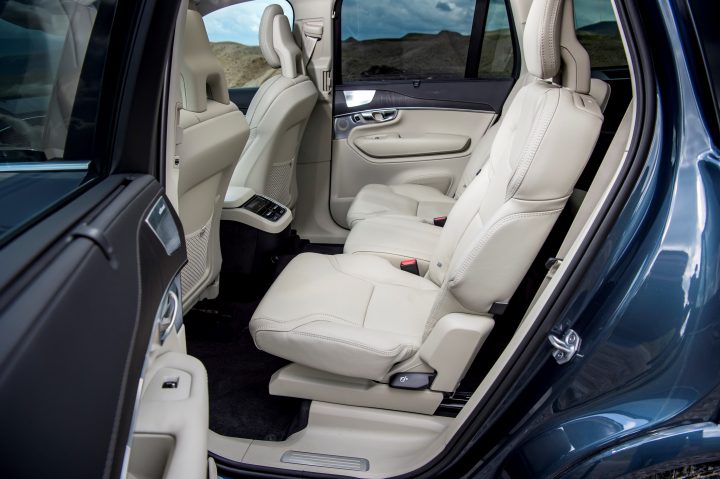 For those who can spend that sort of money they are unlikely to be disappointed with the Volvo XC90 T6 Inscription AWD. The surprisingly modest 2.0 turbo-petrol engine performs above expectations and yet is very refined and fuss-free thanks to heavy sound insulation and mated to an unbelievably smooth eight-speed autobox with manual mode ability as well. Push hard and it does let you know what’s underfoot, the exhaust produces a wonderful noise and the fuel gauge falls to earth.

That is probably the only downside to this very big family car, its love of petrol. I actually saw it drop to 20mpg after one heavy trip but it recovered to give closer to 27mpg overall.

Our test car was fitted with a highly refined selectable chassis system to alter suspension, steering, brakes, and engine response and its not cheap but very effective.

The steering can be taut or tantalizing soft, the suspension hard to very soft and the brakes move from gentle to grippy so the driver can better feel how the car’s working underneath. 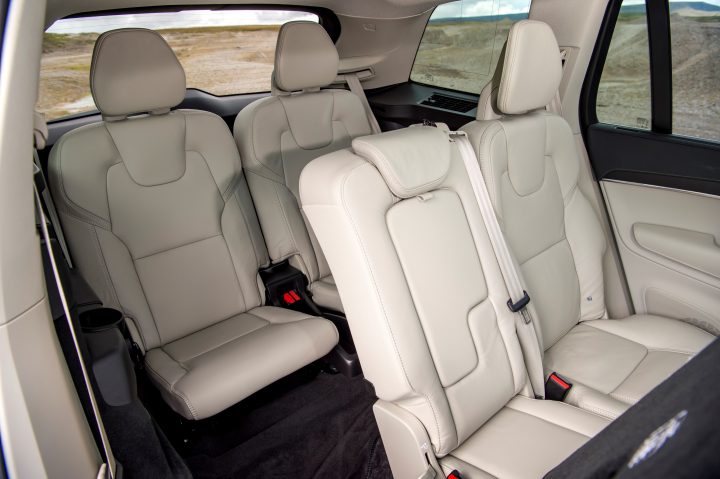 The full-time 4WD gives the car good grip and feedback without any vibration or weighty response and its ride was very good thanks to the excellent large and supporting seats. Those in the rearmost pair had to scramble in but room was good and thanks to a sliding second row of three seats there was a good compromise achieved. Infront the driver and passenger were blessed with space and headroom was good throughout.

Big doors and the electric tail gate made access easy and the bootspace was reasonable if seven-up and gradually improved as the seats folded.

Visibility was excellent if you looked to the front or sides, more of a challenge at the back and a driver really needed the sensors and super intelligent camera and AI parking aids. Headlights were self-dipping, with long wide beams for nights, wipers were big both ends and the wash system one of the most powerful I have used on headlights.

As it’s a family orientated car, the Volvo XC90 does a good job in accommodating the little bits and pieces in the cabin and the driver can easily hook up mobile phone and still have software space for a passenger to add another. 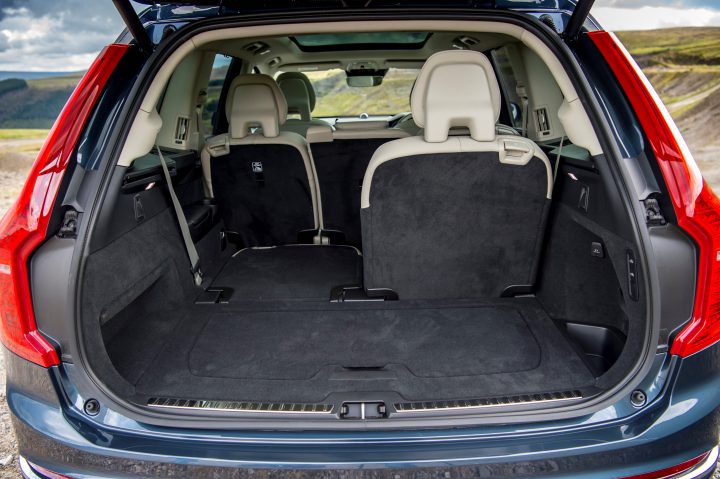 The driver always felt in control with a good seating position, excellent view of instruments and secondary controls and a very large central infotainment screen which worked brilliantly, but which showed all finger marks in some light conditions. Driving instruments were changeable displays but very clear.

Noise levels were generally very low unless you pressed on and the engine note changed, but it quickly covered ground without a fuss, just the occasional tyre bump thump being heard but not always felt.

The Volvo XC90 T6 had a good high riding position on the road so you could see well ahead and around you, over hedges and car roofs in traffic and this is a definite advantage. 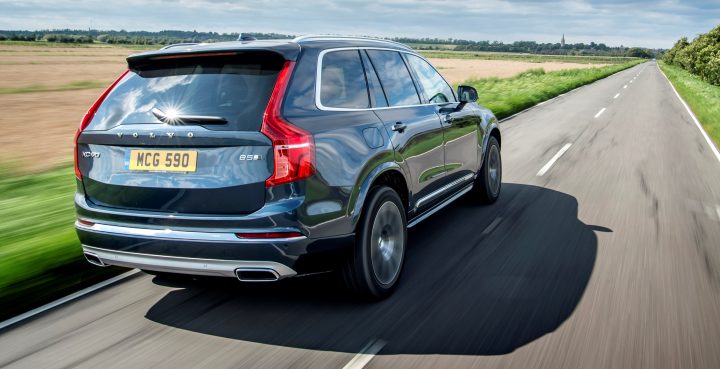 Apart from this and despite its size, it actually behaved more like a medium sized luxury car, except for fuel consumption. However, take a test drive in the Volvo XC90 T6 Inscription AWD and the only question to be answered is if you can afford it.