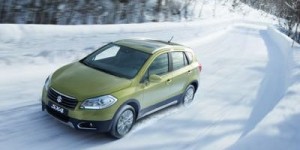 Something that is not obvious can still turn heads, like the Suzuki S Cross.

The television adverts show this new generation SUV driving down a street, causing curtains to twitch and neighbours’ excuses come forth to get a chance to ride in one. The reality is you don’t need an excuse, just an open mind and individuality.

Suzuki has a tremendous reputation for making affordable and able 4×4 drive models as well as a collection of compact family cars and the S Cross Allgrip really blends these skills and delivers them in a modern SUV.

It is slightly bigger than a Ford Focus in all directions but it has 4×4 powertrain underneath with a very simple two or four-wheel-drive selector and normal or sport modes. Front wheel drive and diesel versions are also available but we tested the petrol Allgrip with 4WD.

The S Cross also seats five in comfort and its particularly roomy for the three in the back with a decent sized loadbed and a low cill over which to lift items. In fact, there is almost no edge to the boot but there is a slender underfloor compartment and two side “bins” as well. The rear seats fold down in a third and two-thirds split.

Access for all users is particularly good with well shaped supporting seats and those infront can easily vary reach and rake while the driver’s ability to raise and set the adjustable steering column ensures a comfortable position for anyone.

The fascia is simple and the instruments clear and large with the central display infront of the driver used for the on-board computer information. 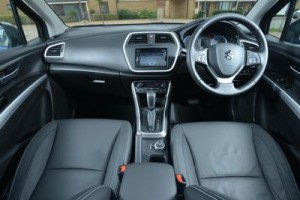 Heating and ventilation is straightforward with heated seats included in the test car’s specification and welcome too on cold days, there’s a big sunroof and blind and powered windows front and back in the SZ5 tested.

Oddments can be stowed in door bins or on the console but compartments are on the small side, and those in the back have pockets for slim items.

The Suzuki S Cross Allgrip has a very comfortable ride for a 4×4 model and it soaked up bumps and potholes without complaint but a little noise. The size of the wheels and tyres play a part in this but they also give good ground clearance for bad weather and the combination is a good compromise.

Handling is slightly dull to the touch but it’s surefooted nevertheless and has no vices to cause concern but you will be impressed by its soft-road technology and ease of use.

It’s slightly slow starting on the push button but once fired up the power comes on briskly and it pulls quite well. I averaged very close to 48mpg overall but that included quite a bit of motorway mileage as well as main roads and the lack of a sixth gear may have kept down this figure. 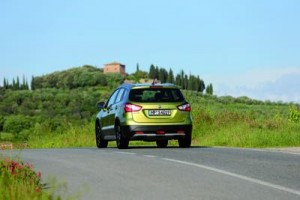 I liked the slightly high riding position which helped visibility, while the lights were bright and the wipers very effective. A reversing camera and sensors are good and useful features on this specification as well and could save a life or insurance claim for damaged bodywork.

In conclusion, there is a lot to like about the Suzuki S Cross Allgrip and nothing to really dislike and it deserves to be considered by anyone seeking a car in this sector and who is not afraid of being different to the crowd.