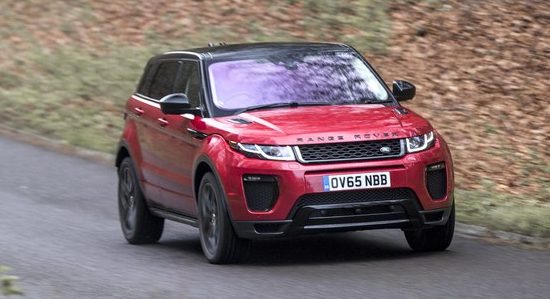 One-in-four Land Rover models sold around the world is an Evoque and that tells you lot about this modern crossover car.

In five years it has become the fastest selling model from the company and Land Rover had to expand production from its original Halewood base to plants in China and Brazil.

It went into production at Halewood, Liverpool in 2011 and its become the best selling model in their range, with a comprehensive update and upgrade in the summer of 2016 to improve the powertrain and give it the latest LED lighting. Its now built in China and Brazil as well to fulfil demand in the Far East and Americas.

There are 25 models in the Evoque series including estate, coupe and convertible body styles with 2WD or 4WD in manual or automatic, and a choice of 150, 180 or 240hp petrol and diesel engines covering four trim specs. Our test car came with over £5,400 optional equipment including rear seat entertainment, convenience pack of assorted aids, active dynamics and driveline. Prices are from £30,600 to £52,400, but likely to rise in 2017.

That is a formidable line up built on the success of the brand and its cutting styling, now given a sharper edge to duel with rivals, thanks to revised engines and driving aids.

We tested the near top of range Evoque Autobiography Dynamic but even that came with over £5,400 of extras, reflecting the sort of money owners spend to personalise their models. It’s a hefty price.

The new 4-cylinder 2.0 litre turbo-diesel engine is made by JLR in the West Midlands and meets the latest Euro6 emissions regulations, even though its not outstandingly low, it is good.

I would have liked a little sharper pickup from standstill but once the turbo was spinning it rammed fuel and air into the four pots and its power gushed out from 1,500rpm. The inherent efficiency of the diesel combined with no less than nine-gears in the auto/ manual gearbox helped economy to well over 40mpg at times on motorway journeys at a steady speed but it fell away again in towns.

That said, the power delivery was smooth and strong most of the time, the gearchanges were usually clean and crisp except under heavy use and the powertrain was pleasantly quiet. 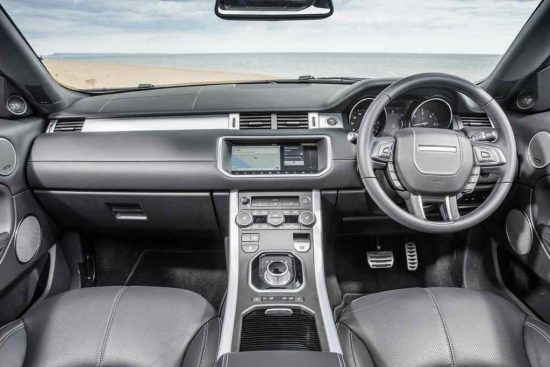 You can select a sport mode by the rotary control or make use of + and – paddles on the column to hold down changes to optimise acceleration. It was quick reacting to the manual levers.

The steering had good feedback all the time without irritating vibration or kick-back and you soon felt confident about hurrying it along twisting roads.

Some of that confidence came from the permanent 4WD system underneath which produced reassuring cornering, grip and never showed any bad points, helped by very progressive and strong brakes. I am not a fan of the electric parking brake because it lacks feel, but it was effective on our usual test slope. 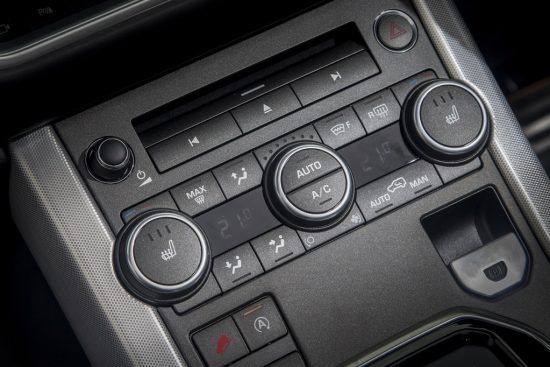 Secondary controls are mostly housed on the spokes or around the column, close to fingers, but some are partly hidden to the lower right side of the fascia and a the climate control and infotainment systems major buttons are grouped on the wide central console and topped by a touch-screen display which is big and clear. 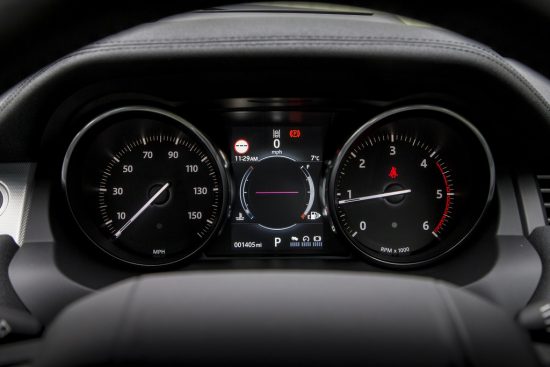 A smaller secondary screen infront of the driver between speedo and rev counter displays the main driving aids and alerts and at times this was very cluttered and could have been larger with smaller dials either side.

Temperature control was very good, comprehensive and effective, with four seat heaters on our test car but no sunroof, just a fixed glass screen with electric blind beneath. Powered windows were fitted to four doors. 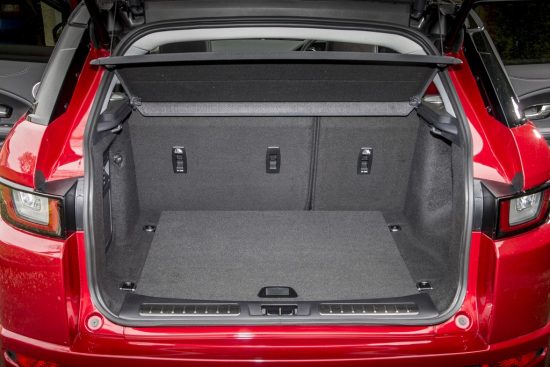 Oddments room was really good for a family car both infront and back and the boot’s modest minimum capacity with its high floor could be quickly tripled in stages.

Visibility was surprisingly good, certainly clearer than the Evoque Coupe, with more glass area in addition to the reversing/ driving cameras and sensors, big mirrors and excellent lights. The LED units are very bright, look around corners and have good range and width. 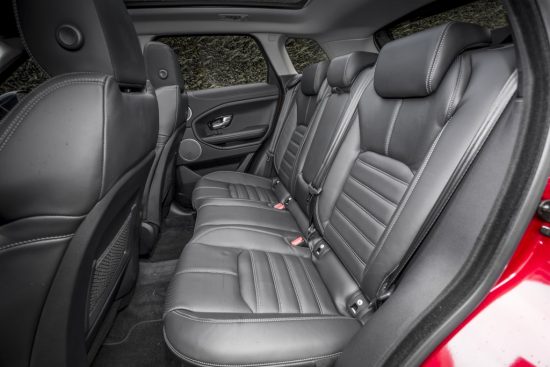 Room was very good for four, a very slight squeeze if a third person was in the middle of the back seat while driver and passenger had plenty of room and very good adjustment range on their seats. Some may find the deeply shaped and firm padding on the front seats a bit too hard but it held occupants securely when in a hurry.

Access was good when you adjusted to the slight ‘step up” attitude, the boot floor was just about waist-level and you could adjust long loads through the back doors. There is only a small space beneath the floor for soft winter essentials.

The high level of standard equipment combined with the desirable options resulted in very sophisticated test car and what it lacked in ultimate ride compliance it compensated for in ability to cover any ground without complaint. The Evoque’s 20-inch alloys and fat tyres tended to pick up every irregularity in the road and springs/ dampers did not smooth out each bump or pothole. 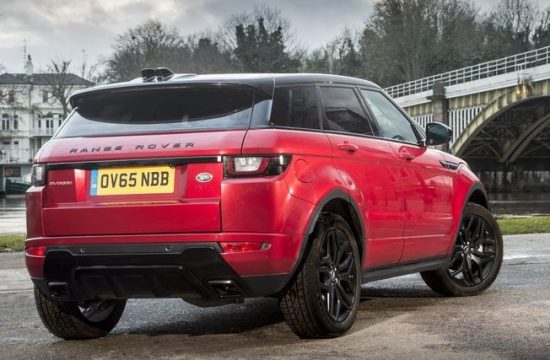 The five-seater Evoque is a competent all-rounder with immense ability to take any weather and road conditions in its stride and offers the reassurance of not only the most modern 4×4 powertrain but comes with over 60 years of knowledge. Today’s drivers seem to like that bit of reassuring heritage in a modern world.