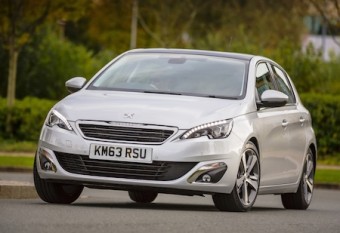 Launched in Britain in January, the new Peugeot 308 was the surprise winner of 2014 Car of the Year award.

It beat the BMW i3 electric, (2014 UK Car of the Year), Mercedes Benz S-Class, Skoda Octavia, Citroen C4 Picasso, Mazda 3, Jaguar F-Type, Tesla Model S electric, BMW 4-Series and BMW X5, Hyundai i10 and the Ford Kuga, to name just a few of those eligible for the accolade.

I had to find out what ticked the boxes for the award judges from across Europe. Whether the 308 deserved the award is open for discussion but for what it’s worth I always feel these awards should be given to models which have brought something new in design, practicality, innovation, performance, reduced running costs and improved driveability to the volume sales sectors of the new car market and will be appreciated by a majority of customers.

In other words no niche models or niche technologies. This might not be the best Car of the Year but it is certainly the best Peugeot 3-series so far.

As for the 2014 COTY awards, with my judging guidelines, the BMW i3 and Tesla Model S electric cars are too specialist and the Merc S-Class, CV4 Picasso, Ford Kuga and BMW 4-Series Coupe/X5 SUV too niche so the result is probably fair!  The French and Spanish Journalists gave the majority of their votes to the Peugeot 308 and the Brits favoured the BMW i3.

Certainly the buying public across Europe have taken the all-new Peugeot 308 to their hearts with over 60,000 order so far  and a third production shift at the Sochaux plant in France is being planned to start in June with 600 new jobs being created. This expansion takes place to cope with the current demand and the introduction of the 308 SW estates which we receive in the UK in June with prices ranging from £16,845 to £25,145.  Additional three cylinder turbo petrol and BlueHDi diesel engines will also be added to the ranges.

There is the usual choice of specification starting with Access then Active, Allure and topping out with Feline.

For this longer road test period I have not gone for the price-leading 1.2 VTi 82bhp petrol or the popular 1.6-litre 115bhp diesel but instead chose the 1.6-litre 156bhp THP, turbo high pressure petrol unit with the top Feline specification.

The Allure level would seem to be the most sensible choice for most people, especially as I suspect the ride comfort will be better with the 17-inch wheels rather than the unsettling 18-inch ones fitted to the Feline models.

Fancy heated and massaging front seats, well cough up an extra £1,200 for the Feline model or £1,500 for the Allure. 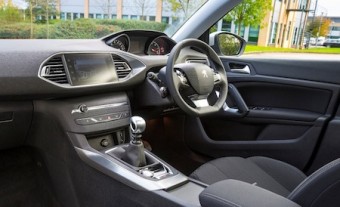 Styling highlight of the roomy front interior is the de-cluttering of controls with most functions now being done through the touchscreen.

This for me, at the media test drive late last year, was a step too far. After a longer spell in the car it still is not user-friendly particularly when it comes to changing the heater temperature, air distribution outlets or air conditioning settings.

Simple fascia mounted controls are much easier and safer to use whilst driving. Tapping into a screen is not convenient; it’s long-winded and potentially not good for the driver to be taking their eyes off the road to make adjustments. Definitely a step too far and style over function in terms of design.

A small diameter steering wheel is used so the dials are viewed over the top of the rim which I liked but I know shorter drivers have issues with the rim obscuring the line-of-site. But the small wheel does sharpen up the steering response and agility.

The design of the front interior is clean and sharp and most surfaces look and feel of good quality but there are some low-cost looking areas of plastic trim.

The electronic parking brake as usual is not too my liking although it can be set to come on and go off automatically and the hill start function is user-friendly.  In the rear the legroom is not that plentiful for adults but the doors open wide for easy access.

The rear folding seats allows the 470-litres of boot space to be extended to 1,309-litres which is useful and the tailgate is made of composite thermoplastic to reduce the car’s overall weight.

On that subject the new EMP2 platform contributes a saving of 70kg out of the 140kg lighter overall weight of this generation 308.  Weight saving of course improves performance, fuel economy and reduces emissions.

The new 308 feels nimble but some of that was down to the 1.6-litre 156bhp turbocharged petrol engine.

This was the first chance I’d had to really try the new platform and its capabilities with a higher performance engine.  Previous drives using this new platform have been with Citroen and Peugeot’s new models powered by diesel units.

The 1.6 THP petrol engine we know well from its shared use by Mini and Peugeot/Citroen.  It is no longer the sharpest tool in the box as technology has moved on but it is responsive with 240Nm (177lb ft) of torque available from just 1,400rpm.  It is quite eager to accelerate briskly but not outstandingly quickly taking 8.4 seconds to go from zero to 62mph and the top speed is 132mph. 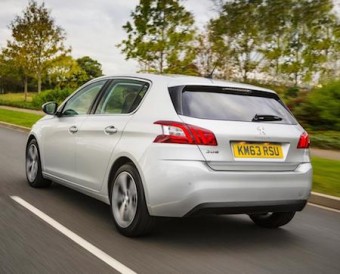 Driving at a modest pace in traffic the engine remains flexible in the mid range gears and dropping a cog will quickly spin up the turbocharger to provide more acceleration boost.  The gearchange for the six-speed unit is not that slick, fast or precise.

What the 1.6-litre turbo petrol unit did prove was the handling and grip ability the new platform offers.  The car felt balanced and it rode flat and level with good turn-in cornering grip with minimal understeer even at quite high speeds.

The steering lacked feedback but was precise and fast to respond partly due to the small diameter steering wheel. Apart from the harsh ride provided by the 18-inch wheels and low profile tyres and a few other niggles it is a worthy new model, the best Peugeot 3-series to date by far but it’s not perfect- but what is?

Dynamically it’s not as accomplished as the VW Group’s new MQB platform as used for the VW Golf, Audi A3 Sportback, SEAT Leon and Skoda Octavia or Ford’s older platform used for the Focus.

For: Smart styling inside and out, well equipped, spacious boot/load area, wide range of engine and equipment options.

Against: Poor rear seat legroom, long throw notchy gearchange, too many frequently used control functions operated through the touchscreen which takes the driver’s eyes off the road, harsh ride with the 18-inch wheels.