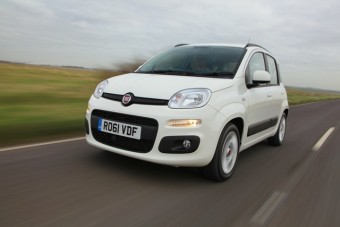 After 32 years on sale the new Panda by Fiat has matured and developed a more rounded look and generous proportions to meet the demands and desires of modern drivers.

With 6.4 million Pandas sold in three decades and three series, it is undeniably a very popular model which drives from the heart of Fiat’s soul for small, agile, comfortable, economical and versatile city cars. Rounded new shape to familiar Panda

Made in Italy, the new Panda will go on UK sale in March and Fiat anticipate selling 9,900 models this year and about 11,000 in a full year, slightly more than the 10,000 current Panda models which went to British buyers two years ago.

The increase is expected because buyers are downsizing and want more from their city cars and Fiat has responded by creating a five-seater, five-door model, with a choice of two petrol engines, including a turbo, and the latest version of the acclaimed multi-jet diesel, available with an automatic transmission coming in a few months.

For now there is only front wheel drive but Fiat has introduced a 4×4 system in earlier Pandas and an all-wheel-drive version is coming later. 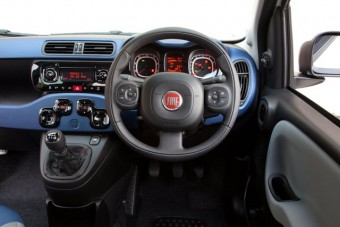 The new Panda range features three trim levels, Popular, Easy and Lounge and most models will have Start&Stop and a Gear Shift Indicator to optimise economy and lower emissions.

For the first time in this sector, models will be available with Low Speed Collision Mitigation which uses laser to look ahead of the car and apply the brakes if it identifies an imminent accident at up to 20mph, typically in nose-to-tail traffic jams, or a pedestrian is sighted crossing infront.

The 99gkm CO2 emissions of the 900cc TwinAir Turbo is a surprisingly sophisticated two cylinder engine which won Fiat a major engineering award last year and develops 85bhp and has been tested to give 67.3mpg combined. A non-turbo version will join the range later this year.

Fiat has completely redesigned or re-engineered the front and rear suspension to improve ride and handling and uses the latest high strength steel to keep down weight while ensuring rigidity and body strength. 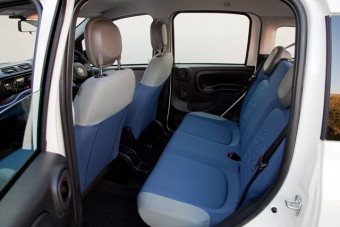 Depending on how you use the folding seats the new Panda will take up to 870 litres in the back and there are no fewer than 14 places for oddments in the cabin.

Fiat has made a lot of the new Panda’s improved tactile feel and attention to detail in the cabin, its optional sliding back seat to maximise legroom and the bigger boot thanks to the larger dimensions of the new model compared to the outgoing series.The present 13 model range begins at £8,900 rising by £650 and £500 steps depending on model to a maximum £12,250. Shorter legs favoured in the back

Fiat has done a good job of rounding the edges and corners of the new Panda, of smoothing the cube, while retaining a lot of headroom inside, even for those in the back.

Access is easy, particularly into the front seats, and the fifth door opens from knee height to reveal a low sill and reasonable sized wide but short bootspace. The back seat folds but the loadbed is not completely flat, although it has a further small compartment beneath.

The driving position seems fairly upright and gives good visibility all round thanks to the low waistline, deep windows and slim pillars to the high roof.

Everything comes immediately to hand and foot, the controls are light and direct and the instruments clear and cleanly styled. Heating and ventilation is straightforward, oddments spaces plentiful.

The front seats are particularly well shaped and locate occupants well but the rear bench type seat is flat and shapeless and lacking in thigh support if you have long legs.

Ride quality was slightly firm but generally it soaked up bumps without too much trouble and a slight amount of body roll on tight turns. The comparatively short wheelbase meant it struggled over bumpy sections and you could hear the suspension working hard.

Road noise was ever present, mostly the tyre rumbles on tarmac, but powertrain noise was low so long as you did not push the engines too hard.

I tried three engines in the new Panda series and found the 85bhp TwinAir Turbo’s two-cylinder throb was addictive and surprisingly pleasant as it pushed out the power and gave the new Panda an agile feel and indicated consumption of 48.3mpg.

The mainstream 1.2 FIRE 69bhp unit was much smoother and had a busier note, pulling the car along fairly well in country traffic at 46mpg, but it was not particularly strong moving from rest with two aboard and it sometimes felt like it needed a sixth gear on more open roads. 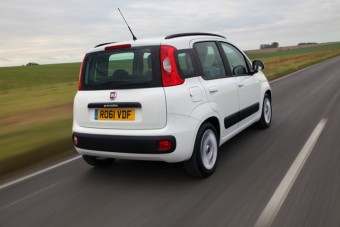 That was even more evident in the 75bhp 1.3 MultiJet because it had bags of torque low down but soon ran out of breath at higher revolutions.

In give and take traffic it was the most desirable of the trio tested and it returned a remarkable 64.9mpg as well, making it the economy champion and for my money the best of the bunch for a driver.

Practical interior behind fifth door Small diesels have never done as well as you might expect in the city-car sector but the ease of driving, the abundance of ready power and the all round competence and economy of the Fiat 1.3 MultiJet really deserves to be considered as one of the best of the new breed for buyers who want economy without sacrificing sophistication in a small car.