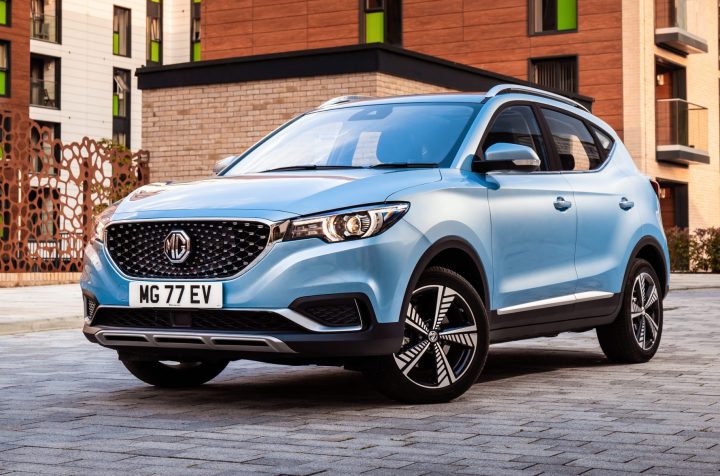 From its conception almost a century ago, MG stood out as  a performance brand on a shoestring and that simple value endures today with a modern twist.

In the 1920s, Morris Garages cars tuned versions of standard family models and today the Chinese-owned MG marque sells family cars but has been one of the first to offer the latest pure electric versions at down to earth prices when compared to many rivals. 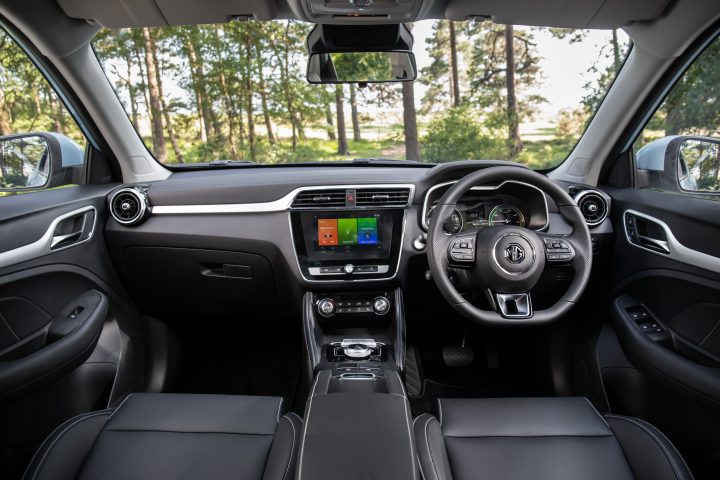 Trim difference for £2,500 between them relate to fabric or synthetic upholstery with manual or automatic climate control air conditioning, sat-nav and reversing camera.

To anyone unfamiliar with an MG EV the starting is straightforward enough after you get in. Firmly press the foot and push the fascia button; it’s as simple as that because you dont have to insert a key and after a couple of seconds when the car’s systems automatically check functions a Ready light illuminates and off you go.

A rotary switch allows you to move from neutral to drive or reverse, the self-parking brake releases as throttle is depressed, you silently roll away and it is silent, which can be strange at first. You hear tyres rolling over the surface but that’s about it. Acclerate and there is no rising exhaust note because there is no exhaust and only the audible note of the tyres changes with increasing effortless speed. 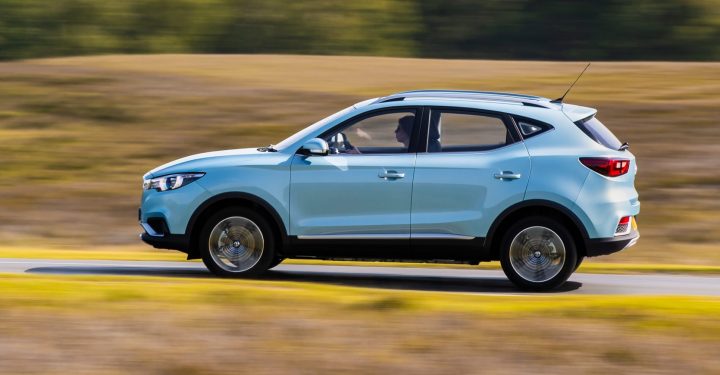 The sophisticated in-car computerised data system can be changed to show a variety of powertain functions including energy stored, used, distance travelled or to needing recharging, and even a useful tyre pressure indicator to monitor any leaks or deflation.

Speedometer is traditional, well marked and clear to read and matched to an energy gauge showing charging rate or power demand.

You can vary the car’s responses by a console Mode button for eco, normal or sport and that determines how the MGZS reacts to throttle pressure, there’s also a button to vary the amount of regenerative braking through three settings to aid mileage extension, while a third displays the battery state. Plug in point is behind the grille’s Octagon badge and in car a display shows the percentage of charge and generated range based on recent past demand.

The central console displays infotainment, mechanical settings and on the top model the navigation with some touch screen features, while a simple range of buttons and rotatry knobs below the screen operated the air conditioning and climate control. All very simple and effective. 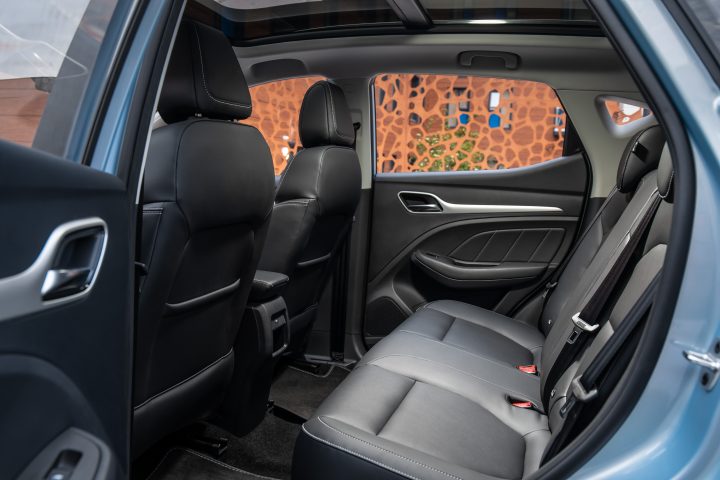 Driving the MG ZS EV is straightforward, the acceleration is very good and deceptively brisk because it’s near silent, there is no gear change to introduce hesitation and the brakes are very strong even on the mildest restardation setting, while the steering has a good turning circle and weight to give satisfying feedback without any vibration.

Ride can be jiggly over some surfaces but generally it absorbed potholes and ridges without complaint, it had little body roll and gripped the surface with confidence while not dipping or pitching under hard braking or acceleration. Noises were mostly confined to tyre rumbles with low wind wuffle but no other mechanical sources.

Secondary controls were generally grouped on two lights and wipers stalks with a third out of sight behind the wheel-spoke for the intelligent cruise control, which I did not like as it seemed far too sensitive and I found the lane change gongs and similar alerts for doors open and unfastened seat-belts were too loud even after setting them on a lower volume. 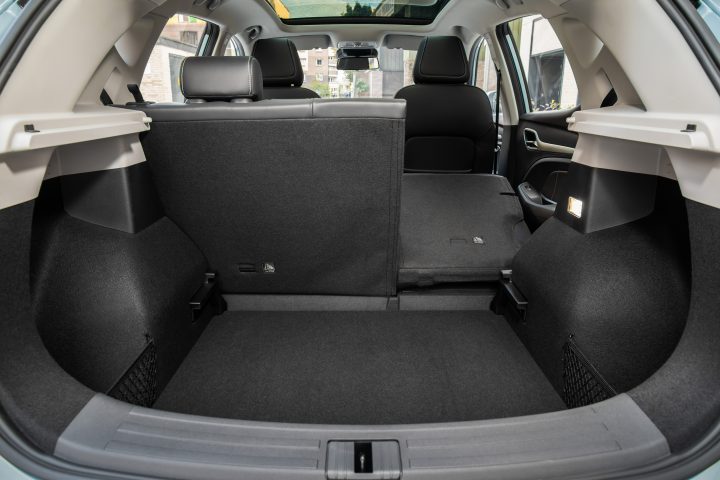 Despite the slightly firm nature of the suspension, the ride was comfortable thanks in the main to the excellent soft yet supporting seats throughout, with a good adjustment range infront, a generally roomy cabin with good access and also an easy to load/ unload boot.

There’s no spare tyre, just a puncture kit, which can be inconvenient and the well under the floor also houses the high and low voltage charging cables which neatly pack away.

Despite having a high definition reversing camera on our top model there were some blindspots behind the roof’s thick pillars and around the front of the car so care was needed when parking and manoeuvring.

Fuel consumption is interesting. A full charge will give it up to 231 miles at modest speed but overall it is tested on the WLTP cycle to 163 miles and its efficiency is rated as taking 18.6KW hours of charge for each 62miles of range and in use it’s fully charged overnight. We found that it typically took a four-hours charge on a domestic circuit to give enough for an 80 miles range so most average commuting would be done with one or two full charges a week and much sooner with a higher voltage charge point at home, work or in a public point where available.

There are a number of apps to download onto phones to work out a charging route for a journey but you have to consider where and when you can do so and build in journey time for these stops, ideally when you need to eat or remotely work. 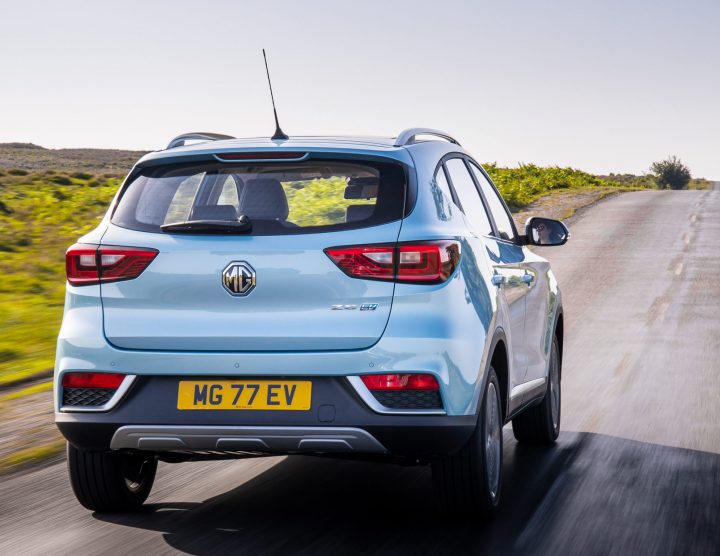 Living with an electric car is not difficult, but it demands a different approach to your habits of a lifetime behind the wheel and a little bit of forward planning. With the MG ZS EV you are certainly not sacrificing creature comforts for any real inconvenience but you actually can gain more than you think possible and you’re helping create a cleaner world for future generations.