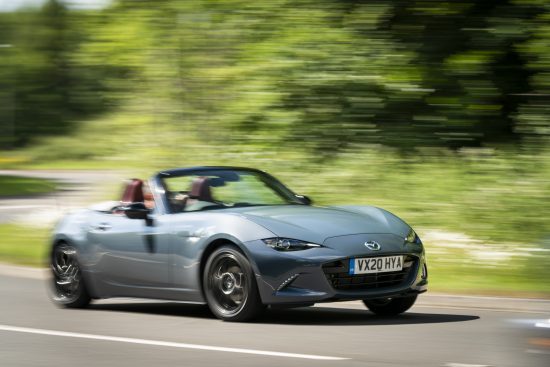 The Mazda MX-5 R Sport Convertible is limited to 150 examples in the UK, where it has consistently led the sector since introduced in the ’90s with revisions and upgrades keeping it at the forefront of demand without diluting its simple and so satisfying basic design.

The Polymetal Grey colour is a new addition to the 2020 Mazda MX-5 line up and on the R-Sport it is matched to piano black wing mirrors, while inside the R-Sport features burgundy Nappa leather seats with silver stitching, ensuring the interior has the same bespoke feel as the exterior. 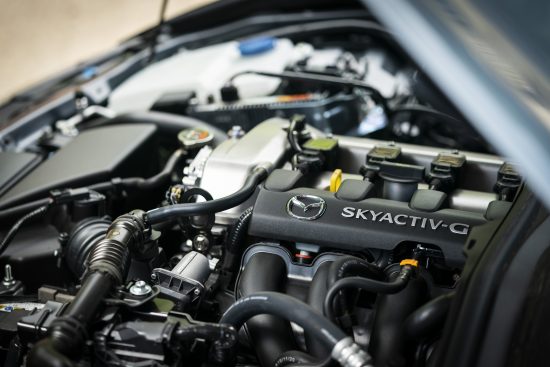 Its arrival means these are now eleven MX-5 models to select, five soft-tops and six Rigid Fixed coupes with 132ps 1.5 or 184ps 2.0 engines, and optional automatic on the more powerful. Keeping it simple with the R Sport for this test means a wonderfully responsive engine with a slick “flick of the wrist” manual gearchange and a very agile, safe handling chassis.

The balance of the car has to be experienced because its so responsive to throttle, steering and brakes it is a track-car you can enjoy on any road in safety. Over 30 years ago when developing the MX-5, the Lotus Elan was the benchmark but while the British sports car disappeared, the Japanese successor took over.

Both were engineered from the outset to be lightweight and put the driver at the heart of the action to enjoy it to the full, and it’s succeeded over the last 30 years.

The Japanese concept of oneness of horse and rider or Jinba ittai is straightforward and has remained the core of the creation of the four generations of the MX-5 so far. 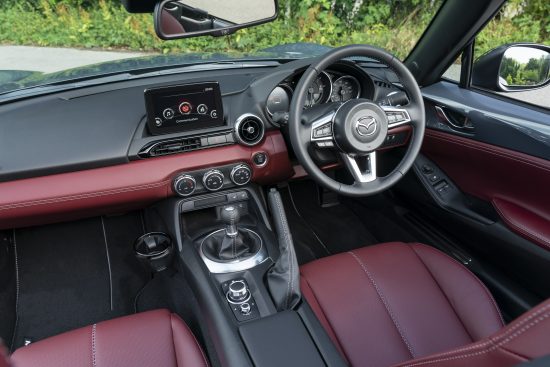 Updates to the powertrain have been made over the years and the latest Skyactiv-G engine embodies Mazda’s i-ELOOP and i-stop kinetic recovery and stop-start technology to stretch economy to a remarkable extent. The engine is an immediate starter, pulls well and fairly quietly until it’s stretched but keep within the best power band and it is composed, quiet, and very frugal.

You can make the most of the power thanks to that creamy close ratio gearbox, snap changes and sensible spacing. A well weighted clutch eases selection up or down.

I liked the footbrake feedback and its blend of power and precision, dramatically but controlling deceleration with a fine ability to stop without drama from any speed. The handbrake was also effective and had good feel as it was applied.

For me it’s the steering which really impresses. Sensibly sized for turning quickly with constant indications of where the wheels are pointing at any moment, the feeling was precise and the effort required minimal when parking with a good turning circle as well. There was no kickback over bad surfaces either.

Smaller wheels and tyres than usually found on cars today means they do not wander over broken tarmac or give a bad ride and the suspension does a good job at soaking up poor roads’ bumps but it could occasionally be stiff. Generally it was very compliant and you could cover long distances without tiring. 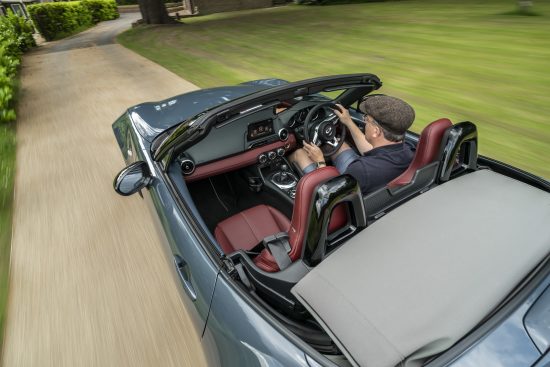 Doing that was assisted by the small but finely hugging wrap around leather covered seats.

Adjustment fore and after was reasonable but I would have preferred more rake range and better under-knee support for a taller user.

Oddments space was a bit challenging with very small door bins and console trays although you have a box compartment between the seatbacks and I think most items would end up on the floor, behind the seats or in the boot. That’s only suitable for shopping or possibly a golf-bag and there’s no spare wheel, just a repair kit, which can be inconvenient.

Access to boot and car was very good, the manually folding fabric roof released in seconds and folded flat with a distinct click lock behind the headrests to give excellent vision. When erect the small window in the soft-top really limited what could be seen and you end up relying on the twin mirrors as there’s no reversing camera, just sensors.

Wipers and wash were good and the headlights were bright and wide spread but did not seem to have a long range beam on country roads at night.

The MX-5 is compact and that meant most of the secondary controls were closely placed around and on the steering wheel spokes or column stalks and operated with a satisfying click. Less used buttons were on the fascia or console and some were activated by the multi-mode rotary knob behind the gearlever and through the infotaiment screen atop the fascia. 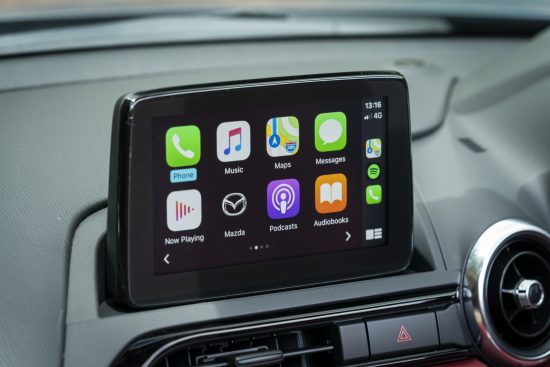 The screen itself was clear but not big and meant a user would have to scroll around a bit to find some items, which can be distracting. Heating and ventilation was excellent, the soft-top easily opened or closed, power windows were quick and the temperature, fan and distribution switches were backed up by the heated seats’ buttons so you could easily select what you preferred.

Tacho and speedo were clear if not big, backed by the fuel and other warning gauges, a changeable display for cruise and trip settings was straightforward and you were never in doubt about any readouts. 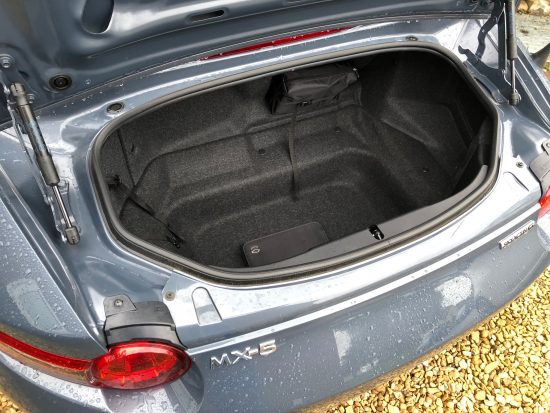 The MX-5 with fabric roof is remarkably quiet when it comes to subdued wind noise and there were no water leaks evident which indicates the sealing was first class and it also made the interior very snug. With virtually no wind noise, occasional engine noise and some background road rumbles, the MX-5 was easy on the ears. When pressed, even the engine noise was not that disagreeable.

What really pleases any driver of the little sportscar is the way it goes, willingly, easily, with good handling and predictable strong grip. Excellent road manners mean you know how far you can push it and how quickly it comes back on line is reassuringly safe.

At this price there really is nothing on the market to beat it for satisfaction with a big smile and that is a very rare feature at any price.