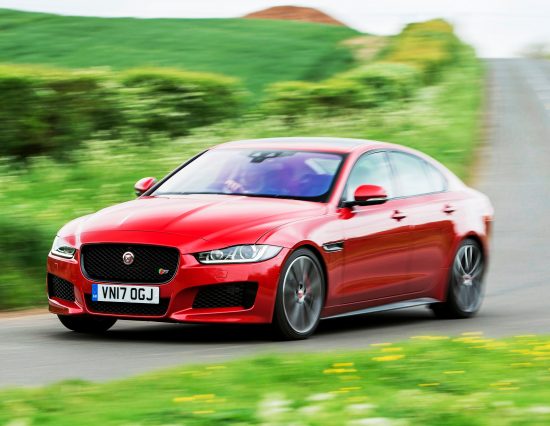 It’s the first application of their 2.0-litre, four cylinder turbocharged 200, 250 and 300hp petrol engines while a 240hp Ingenium turbodiesel engine is also added to the range and the sporty XE S gets a 40hp increase to 380hp for the 3.0-litre V6 petrol engine which continues to be manufactured for JLR by Ford. 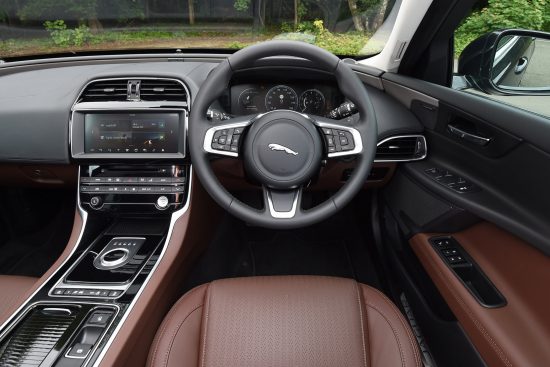 Other improvements include an upgraded interior with higher quality carpeting, additional chrome accents and enhanced leather quality. Available is a 12.3-inch TFT instrument cluster with four visual themes and full-screen navigation and dual view screen InControl technology is introduced on the Touch Pro infotainment system which allows passenger and driver to simultaneously view different content on the central control screen.

Jaguar XE core model prices for the 2018 model year start at £28,295 and rise to £48,045. The XE’s competition in the heartland of the D-segment business and retail car market sectors are the Audi A4, BMW 3 Series and Mercedes C-Class.

To sample the new JLR 2.0-litre turbo petrol engine I slipped into the Jaguar XE Portfolio 200hp model which has an eight-speed automatic gearbox as standard with rear wheel drive. The price is £31,695 but my vehicle was fitted with a huge range of extra cost options to showcase what is available and so the test car’s price was £42,865.

The XE for 2018 remains the comfortable riding, elegantly styled four door sports saloon which visually offers something different from the more commonplace higher volume selling Audi A4, BMW 3 Series and Merc C-Class fleet favourites. It has its drawbacks chiefly cramped rear seat leg and headroom and an awkward boot design.

The main changes are of course the move from Ford supplied 2.0-litre petrol engines to JLR’s own Ingenium units.   In the case of the new 2.0-litre, four cylinder turbo petrol unit fitted to my test car, the capacity is the same as the blue oval unit with the same 200hp (197bhp) power output. However there is 40Nm more torque at 320Nm which makes it more responsive mid range .

It is more economical as well officially returning 45.1mpg in the Combined Cycle versus 37.7mpg for the Ford unit. My week long road test driving using long and short runs returned 38mpg but much of that was done in its ECO mode which didn’t detract at all from the engine’s ability via its torque to respond when swift acceleration was required.

The performance of power output and torque are well matched to the eight-speed automatic gearbox as it revs willingly with a smooth delivery of power. Just occasionally the changes between first and second gear ratios felt a bit ‘snatched’ during initial acceleration but generally changes up and down the gearbox were smooth especially in higher gears where they were seamless.

Unless revved really hard the engine was quiet but it was oddly harsh in tone when the stop/start system was used. It sounded very ‘metallic’ when the starter motor operated under stop/start conditions but strangely not during normal push button starting.

Overall handling lived up to the XE’s sports saloon billing. The handling response was sharp, the steering precise for a saloon and the ride compliant. Whether it was being ‘hurried’ along on open winding roads, cruising on motorways or dawdling along in traffic it was a nice car to travel in. 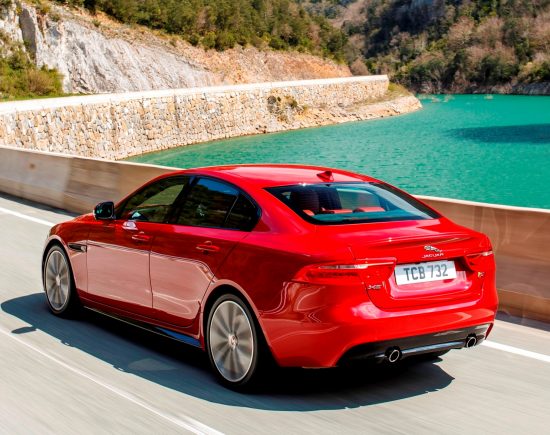 The upgraded interior looked and felt plush, build quality has improved but it’s not the roomiest of saloons if a bit more ‘exclusive’. With the UK motoring public getting more jittery about buying or running diesel fuelled cars now and in the future, the arrival of JLR’s Ingenium petrol engines for use in Jaguar and Land Rover models is very timely for their 2018 model ranges.