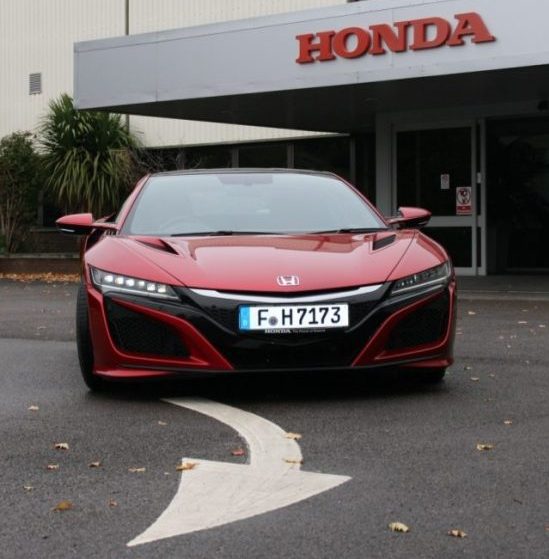 It’s the supercar of the moment, says Robin Roberts.

But that moment has lasted a long time. Three years in fact and the first UK owners will get behind the wheels of their state of art supercar just about now. A handful will be introduced over the coming months and just two dealers will handle the aftersales and servicing for the 100 NSX models to be delivered over two years with a full order book for a further two years.

Those first owners had to put down £5,000 deposits and have been carefully checked to ensure the NSX gets into the right hands of enthusiasts who will appreciate this modern supercar for what its worth.

And it’s price is probably a lot less than you might think.

At around £144,000 on UK roads it undercuts a McLaren, matches some Porsches and even Aston Martin models. But there the brakes go on in the rarity race because the Honda NSX is far more exclusive.

Taking its name from the company’s supercar of the 1980s, the new model is very different and it’s built in America with a lot of Japanese engineering input.

Under the sculptured lines of this mid-engined rocket is a very beefy 3.5V6 with a turbo-charger on each bank of cylinders and no less than three electric motors to add punch and grip when needed.

It turns heads every time you go out, makes passengers in other cars take pictures and even stops cars if you are lucky, as I was on my road test and wanted to pull out into two lanes of heavy traffic. To me, that is the mark of a true supercar – it stops other traffic in their tracks.

It has a presence which is eye-catching by its design and sheer size because it is wider than most other cars on the road, bigger than an Audi R8 for instance.

The body is part aluminium and plastic over a mixed-material spaceframe with aluminium subframes either end carrying the powertrain, suspension and steering. It’s complex but very effective.

Eschewing a planned V10, the 3.5V6 develops about 500bhp, enough you might think, but hang on this is the NSX and it comes with a 47bhp electric motor/ generator. Together they work through a nine-speed dual clutch automatic box to send their combined power to the back wheels.

At the other end 26bhp electric motors on the front wheels provide a sort of 4×4 system. Unlike conventional hybrids, this Honda uses electricity to spark speed not supply subtle city driving. 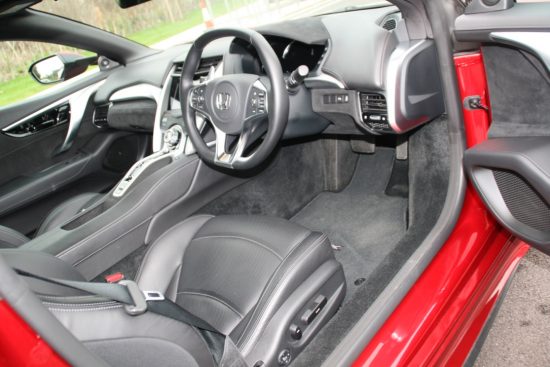 The two-seater cockpit has conventional doors and once you slip inside the big wrap-around seats are immensely comfortable, supporting and adjustable.

It is more of a fighter plane cockpit than conventional supercar with everything angled towards the driver and immediately to hand.

The wheel-spokes carry most secondary controls and infotainment buttons with paddles for manual gearchanges if chosen while the central console sweeps up the gear selection and four-mode choices for power outputs and characteristics. Changing those modes makes the virtual instrument display alter as appropriate and it all looks very busy and needs familiarisation to take in at a glance.

It has a chunky steering wheel and the feel through the system is very good, it responds quickly, there’s no kick-back or heavy handedness about it, and its not too light either.

Underfoot, the big Brembo ceramic brakes needed only modest pressure to bring about a rapid stop and the electric brake held the car on a slope we found for the test.

The nine-speed transmission is a very smooth changing piece of kit going up or down the box, with plenty of torque available thanks to the electric motors and the top ratio gave it a very long-legged performance for touring.

Switch to manual mode and the system is still creamy in character and you can play at being an F1 driver until you hit traffic and then swop back into the selfless setting.

It’s not particularly noisy but rather more refined in sound quality when you push for power and that’s down to the V6 engine with its electric assistance.

The handling is similarly sophisticated so the Honda NSX turns into corners with confidence and control, stays put and on a chosen line and then rockets out of a bend as you ease down the pedal. There was no vice in its nature, just virtue.

The ride was firm, sometimes hard over bad bits of tarmac due to the 19 and 20-inch tyres, but most of the time it was compliant and composed. You could certainly go hundreds of miles in a day without getting shaken to the core as in some rivals.

Avoid the Sport+ and Track modes if you want to enjoy the best British roads as they do considerably tighten the system. But on the right roads or a circuit…..

Living day-by-day with the Honda NSX means you would soon adjust to overcoming its blindspots over the shoulder and when emerging from junctions because it is low and the bodywork wraps around the cabin. There was no opportunity to test lights or wipers. 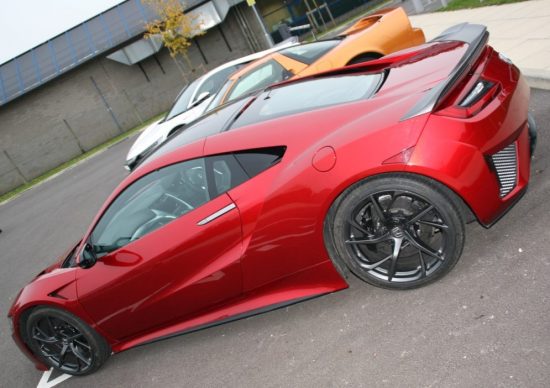 Over a mixture of main roads, motorway and country lanes we averaged about 34mpg, not brilliant but considering the power potential it was a good, reasonable return. It’s close to 1.8 tonne, after all.

Not that it felt heavy when it came to handling. It had an agility that belayed its weight.

It is one of the finest supercars for your money today. It’s different, desirable and truly never gave us a moment’s concern.