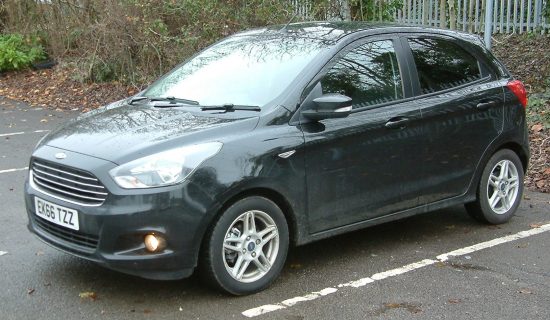 Babies have a habit of growing up, just like the new Ford KA+.

From its origins as a compact city car in 1996 we have seen it develop in 2008 into a convertible and sporting model and in 2014 the third generation KA+ was launched with an extra 7.5 inches wheelbase, and it came to the UK in 2016.

It is a simple Studio and Zetec trimmed three-car range from under £9,000 to almost £10,300, powered by 70 or 85ps versions of the familiar 1.2 litre four-cylinder petrol engine with a five-speed manual gearbox but no automatic option.

The additional rear room has significantly extended the appeal of this school-shuttle, with good access, leg and headroom, a modest boot if three are seated but much more useful capacity if the back seats are folded, although they don’t go flush with the boot-floor.

The fifth door opens high to reveal a deep, wide but not long boot and our car came with the £100 optional steel wheel, which I think should be standard as the better solution to a serious puncture than a can of squirty sealant foam.

With the gradual increase in bootspace from the 60:40 split seats you can put a folded pushchair in one side and still take two back seat passengers, so it’s a very family friendly interior. In fact I think some teenagers would also be happy to see the grandparents at Christmas if you took the KA+.

Cloth seats are warm and comfortably shaped with good adjustment range on the front pair.

When used with a few aboard the little engine can labour, particularly in hilly country, but it pushes the miles away on main roads and motorways and we returned 42mpg without any problems or deliberately light-foot driving.

Having a cruise control and using it on main roads makes a difference and the Ford system is very easy and effective.

When it comes to driving in town the KA+ really comes into its own with light controls, a good turning circle and slim roof pillars for clear visibility when parking or pulling out. You can specify the test car’s city pack of sensors and folding mirrors if you want to preserve the body from damage at a cost of £300.

In town or on open roads the road noise was ever present and let you know how well the suspension was coping as most bumps were smoothly absorbed with only a slight tendency for the car to roll around tighter turns.

The handling was biased towards understeer but it was entirely safe and surefooted and there is a lot of technology in the KA+ to keep you out of trouble and help you pull away on hills for instance.

For all its visual changes there is a familiar look to the interior and Ford has not taken the opportunity to upgrade the very small infotainment screen atop the cluttered console contrasting with the big main instruments and supporting displays which are very clear and easy to understand.

The Ford KA+ is a model the company had to introduce to widen the range and it will be interesting to see if it impacts on the larger Fiesta sales, although that is also getting a serious revamp in 2017.

KA will always be the baby in Ford’s family but the KA+ turns it into a toddler.