Sixty years after Carlo Abarth created the iconic pocket rocket seemed a good time to test the latest 595 Competizione version from Fiat and it didn’t disappoint.

When he started tinkering with the diminutive baby Fiat, a pint of beer in Britain cost the equivalent of 8½p, petrol was 5p a litre and the Beatles launched themselves at The Cavern Club, Liverpool. The rest, as we say, is history and while prices have changed some popular things endure, including the Abarth brand owned by Fiat.

As the sporting brand of Fiat, the Abarth name and its famous Scorpion crest have a loyal following and strong desirability whether convertible or hatchback. Our test car included a £825 optional Brembo Black pack. There are four trim levels with power from 145 to 180 hp and all Euro 6D compliant but the most desirable is arguably the Competizione we tried in manual form but an automatic is also available.

Under the bonnet is shoehorned a 1.4T petrol engine as used in German F4 racing, so it’s a sporting pedigree and it shows when you start up and accelerate, particularly in the Scorpion selected mode from the button on the fascia and there’re Koni shock absorbers, Sabelt racing seats and a lot of dark plastic trim under a black fabric headlining. 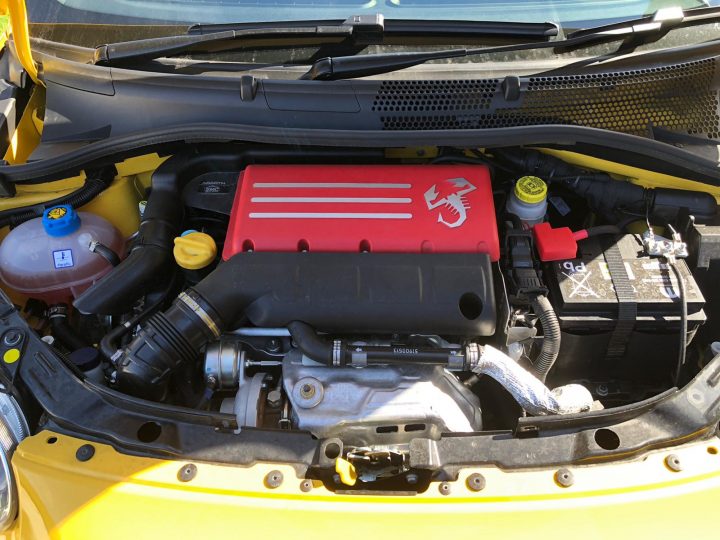 The “Sport mode” selector button on the dashboard affects peak torque delivery, power steering calibration and engine response to the accelerator pedal, making them sharper. It also works in tune with the exhaust to quite dramatically deepen the sound.

In terms of technology, the 595 version includes as standard the 7” touchscreen radio and to the delight of Abarth enthusiasts, there is a new startup and shutdown screen. Setup for Apple CarPlay and AndroidAuto compatibility are available.

While the 595 Tourismo is a tourer as the name suggests, the harder edged Compeizione is more sporting focussed with cloth covered sporting seats and a mixgure of leather and carbon fibre steering wheel and gear knob, with Alcantara trimmed fascia. 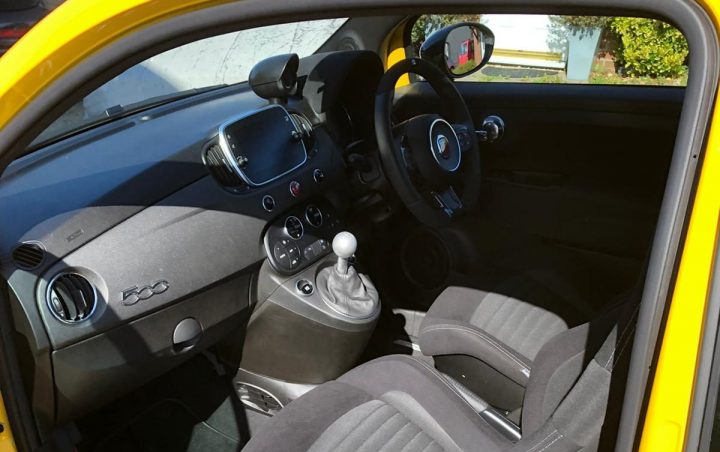 The fascia with its distinctive wake-up illustration of a car in a garage is dominated by the 7-inch touchscreen for navigation, telecoms, music and DAB radio with BeatsAudio as well as car settings which work in conjunction with the button on the wiper stalk to select trip meter and secondary displays between the speedo and tachometer gauges. A separate turbo-boost gauge sits atop the instruments’ pod and is a real throwback to the 1960s and track cars.

The engine starts instantly and with a delightful crackle, then the 595 sharply pulls away as you quickly move through the box with its close set ratios. All too quickly you are in fifth and left wanting a sixth gear.

The little engine’s flexibility is not great but it’s no hardship to dip the clutch and select another ratio to keep the pot boiling in its sweet range. The quick, slick gearchange and light clutch are straight out of a racing car design and the well weighted steering wheel imparts great feedback with more effort needed as speed rises.

Matching the powertrain are the brakes, 284-mm front ventilating discs and the 240-mm rear discs to contain the performance with excellent feedback from light pressure to hard use. A conventional handbrake is also welcome and held our car on the usual test slope.

The tuned Koni shock absorbers with big 205/40 17 tyres put down the power very well and gave the 595 Competizione a kart-like handling feel on twisting roads. The ride could be jiggly over some surfaces and it did not cope well with speed pads and humps but it did tenaciously grip corners and there was little tendency to run-wide on turns at sensible speed.

The sporting seats did little to soften the blows which did pass through the suspension but they did ensure the occupants were securely held in place and couldn’t avoid the impact while securely gripped on very tight turns.

Access was good into the front seats but it was restricted to get behind and once seated the legroom and headspace was short. The split seatbacks could be quickly dropped to increase the very small bootspace threefold. 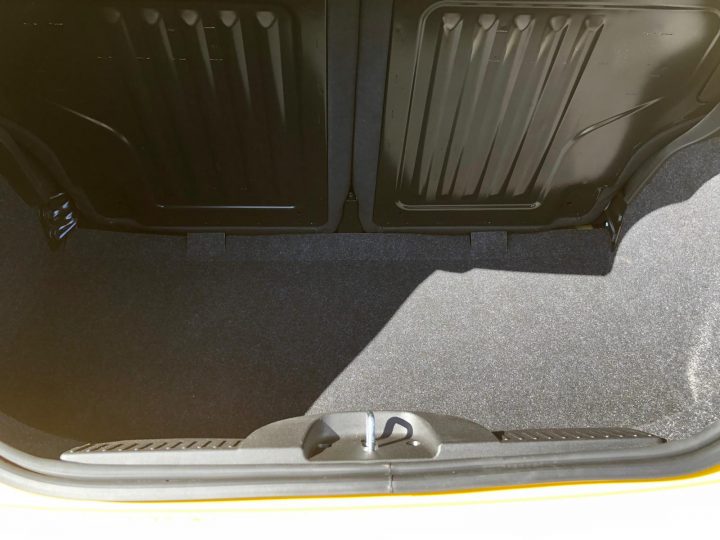 Visibility was good all round with slim pillars, good washers and wipers and at night the headlights provided a long though not wide beam.

Noise mostly came from that delightfully busy engine although it could be muted out of Scorpion setting, with road rumbles remaining ever present but wind noise was low.

For the driver, the secondary controls were generally nicely placed, worked well and the essential gauges were big and clearly marked, changing their display patterns with the sport mode setting. The touchscreen was a busy centre with so many functions available but it proved quick and the actual displays could be maximised or minimised very easily to aid clarity and information.

Heating and ventilation was familiar Fiat and had big buttons and outlets which were simple and highly effective, backed up by quick acting powered front windows. 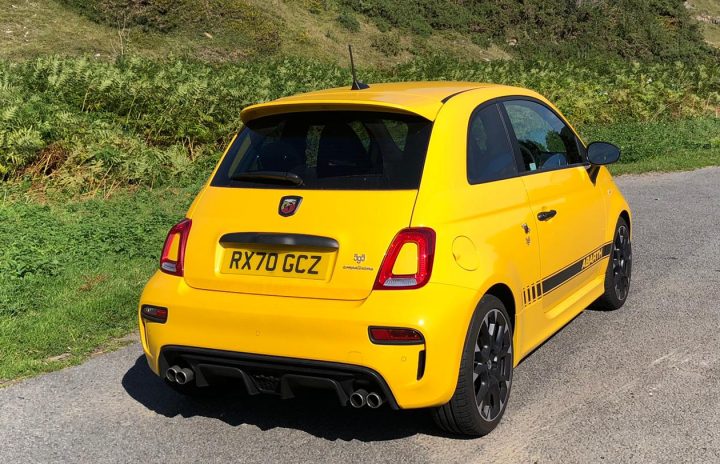 In today’s small cars, even some of the cheapest, you get a reversing camera to aid parking but the 595 was devoid of such a device and frankly it would be an unnecessary expense as it had good sightlines.

It was a head turning test car, a fun car to drive over modest distances once off motorways and despite lacking some more familiar features it had another in abundance which many cars do not stock, smiles per mile.