You are here: Home / Featured / Vauxhall Insignia ST – more litres to the pound 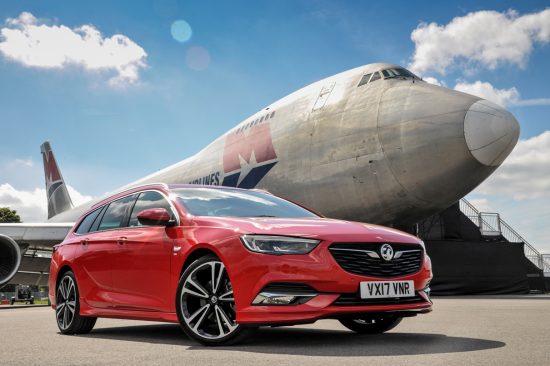 After the second generation Vauxhall Insignia five door D-segment hatchback launched in April as the Grand Sport,the Sports Tourer variants are joining the line up.

To follow in September is the Country Tourer estate with all-wheel drive and torque vectoring, a new five link rear suspension and a 20mm raised ride height.

The new Sports Tourer estate models come to market offering more interior passenger space, more luggage room, higher specification, improved engines and they cost less than the generation of models they replace. Prices start from £18,685 to £29,910, around £1,500 less than before and the load space is 1,665-litres – an increase of 135-litres.

The original Insignia range was launched in 2008 to replace the long serving Vectra models. It became European Car of the Year in 2009. The first generation Insignia models soon found favour with UK new car buyers, mainly fleet and business-user chooser customers. Britain became the biggest European market for Insignia and at its peak in 2011 about 46,000 were sold fuelled by demand from the daily rental operators. Last year UK sales with less daily rental business were around 25,000 units.

Like the new Insignia Grand Sport stylish aerodynamically shaped five door hatchback derivatives, the new Sports Tourer has a bigger footprint with a longer wheelbase and wider track than its predecessor and this has created more leg and shoulder room but there is also added headroom and the occupant comfort is enhanced with better seats, Apple CarPlay and Android Auto connectivity as well as the groundbreaking OnStar assistance system for emergencies or concierge services.

Back to ground level a quick walk around the large estate showed the design to be an evolution of the outgoing model rather than a revolution although it is a new platform with new and larger dimensions. In particular the former clamshell design rear tailgate which restricted the load carrying abilities in terms of load space length, has been ditched in favour of a conventional style tailgate although it still rakes sharply forward so restricting height towards the rear of the load area which might not please Fido.

The length of the Sports Tourer is amplified with a continuous bright metal trim extending from the A-pillar to the C-Pillar and down into the rear light clusters.

A mix of sharp styling lines and sculptured panels beneath the waistline give the estate a powerful athletic stance helped by the 92mm longer wheelbase. The front and rear tracks have been widened by 11mm, there is a 7mm increase in overall width and the total length has grown to 4,986mm. It now looks a substantial, expensive, well planted estate car with improved kerb appeal. Most people like their cars, even estate cars, to look good. This one does just that. 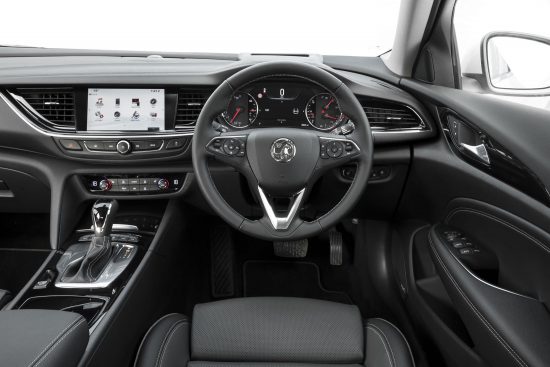 Inside again it’s an evolution in the design and layout of the fascia panel with its centrally positioned touchscreen and quite a number of controls and switches, some hidden from view but all easy enough to operate once the driver has learned where they are. If you are a past Insignia driver you will recognise the layout and controls easily enough

The driving position is good as is the visibility in most directions although there are blindspots at the rear quarters but the specification includes such things as blind spot monitoring and other safety elements and the standard fit emergency braking with pedestrian protection. A popular option is proving to be the £290 head-up display and the front and rear parking sensors £460 option on our SRi Nav test car should be standard fit across the range for an estate of this size. Thankfully not all major functions have to be operated via the touchscreen so there are independent controls for most systems as well as the heating and ventilation controls. This means more driving time with eyes safely on the road and less time with eyes looking at a screen.

On the open roads the Insignia Sports Tourer felt a well balanced package with a compliant and comfortable ride with its 17-inch alloy wheels although the handling and steering responses felt on the ‘slow’ side which I didn’t mind at all. It is meant to be a big comfortable and versatile estate car ideal for long journeys. Generally the estate rode flat and level even during fast cornering and the only cause for a mild grumble was the noise intrusion into the estate from the tyres over poorer road surfaces.

The main selling 1.6-litre 136hp turbodiesel unit supplies 320Nm of torque from 2,000rpm so it is responsive providing full use is made of the lower gear ratios during acceleration to overtake slower traffic. Once cruising along you wouldn’t really know it was not a 2.0-litre unit. It easily coped with 70mph cruising speeds with the minimum of noise or effort and probably its quietness brought our attention to the road noise intrusion.

That will be the main model in the range for the main users, fleet and business customers. But for those retail customers who cover less mileage I advise you to look at the 1.5-litre 165hp turbo petrol engine and with the lower cost Design Nav specification. I had a brief spell in this model and for the price of £18,985 it is the version I’d opt for. It has most of the important items of spec such as air con, auto lights, electrically operated windows and door mirrors, cruise control, sat-nav, DAB radio, 8-inch colour touchscreen and Bluetooth. At that price it’s a bargain in a line-up of very competitively priced, high-spec models.

The new 1.5-litre petrol engine is very quiet, it produces 250Nm of torque from 2,000rpm so you need to keep the engine in its sweet-spot by changing between gears on winding country roads but it’s no slouch with a top speed of 138mph and zero to 60mp takes 8.4-seconds so it’s faster than the 1.6 diesel. Fuel economy isn’t bad either with 40.8mpg recorded on my test drive against the official Combined Cycle figure of 46.3mpg. The CO2 emissions are higher than the diesel at 139g/km so VED road tax is initially £200 and then £140 Standard rate.   Benefit-in-Kind tax is 26% and insurance is again 16E. For me as a retail customer wanting a big estate that looks really impressive value and this is the model I’d choose. 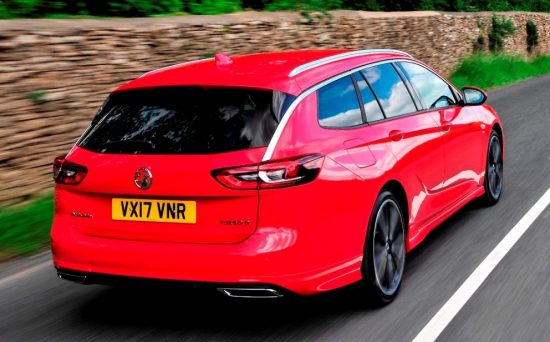 To put it into perspective as an example of just how good a value proposition this particular large Insignia Sports Tourer 1.5 petrol estate is, it actually costs £385 less than the new Nissan Micra 0.9-litre turbo petrol, top spec ‘supermini sized test car I drove in to the event. Food for thought?