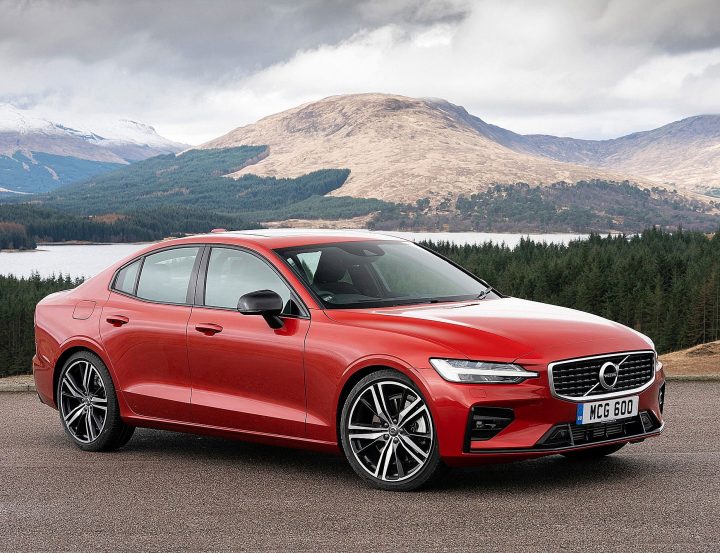 The new Volvo S60 premium mid-sized saloon range was introduced in the Spring of this year and its arrival heralded two important moves, says David Miles.

Firstly it is the first modern day Volvo car range not to include a diesel engine.

Secondly it is the first model to be built in Volvo’s US manufacturing facility in Charleston South Carolina continuing the brand’s rapid expansion under the ownership of the Chinese Geely Holdings conglomerate.

The S60 is Volvo’s seventh all-new model range launched since 2014 and 2018 brought success with another record year of global sales which increased by 12.4% and in the UK it was also success with a 9% growth in sales and they are up again this year.

There is a third important move just announced for UK customers.  With many of their model ranges including PHEV plug-in-hybrid variants, falling customer demand for these types of vehicles, caused by the loss of the Government’s £3,500 Plug-in Vehicle Grant off the purchase price and the projected move to cut Benefit-in-Kind tax rates from April next year,  customers are now holding off buying a PHEV.

These issues have triggered Volvo UK to introduce a sales incentive in the form of a year’s supply of free electricity to charge their car. They aim to maximise zero-tailpipe-emission electric driving by reimbursing motorists for their energy costs and encouraging them to keep their car’s hybrid battery charged.

The offer is available across the full range of seven Volvo PHEV plug-in hybrid cars purchased from now until 30 June 2020. One year’s electricity consumption for each car will be calculated from May 2020 via the Volvo On Call app.

Reimbursement will be made at the end of the 12-month period, with the amount based on the average price of electricity in the UK. The offer is available to both retail and business/company car customers.

The latest addition to Volvo’s PHEV line-up is the just released S60 Saloon T8 Twin Engine model as well as including their a new R-Design Plus trim level for some other versions in the range. 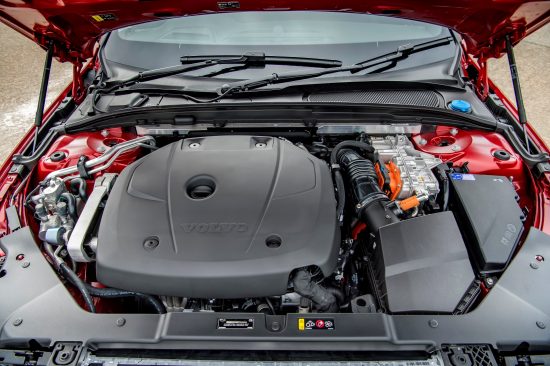 Volvo UK says 85% of their S60 sales will be for the T5 engine, 13% for the T8 and just 2% for the T8 Polestar variants. R-Design Plus will be the choice of 80% of customers, Inscription Plus 18% and Polestar just 2%.  Around 70% of S60 UK sales will go to retail customers and 30% to fleet users. Sales of this new generation S60 are expected to be higher than the outgoing models which achieved 960 UK registrations in 2018. The S60’s main competitors will be the Audi A4, BMW 3 Series and Mercedes-Benz C-Class but could also include the Jaguar XE, Lexus IS 300h self charging hybrid and the less costly but larger Volkswagen Passat Saloon.

The new Volvo S60 four door, five-seater saloon has all the hallmarks of the brand’s sharp and crisp family styling with crease lines and sculptured panels. At the front is the latest Volvo grille and the side profile is the now well used by all brands, coupe silhouette. It uses the latest generation SPA (Scalable Product Architecture) platform already in use for the V60 estate, S90 Saloon, V90 Estate and the XC40, XC60 and XC90 SUVs. 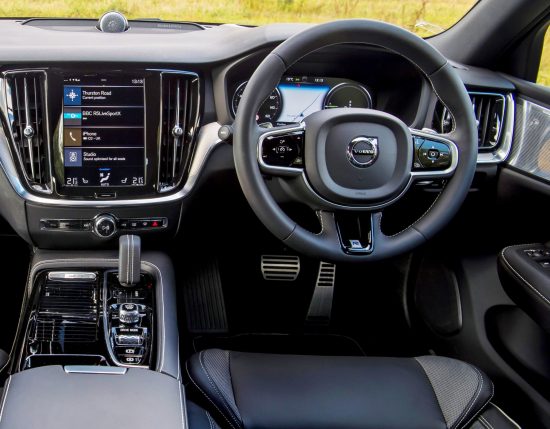 Inside its more of the Scandi Chic style carry-over design layout and high quality fit and finish with large comfortable seats, loads of driving support information and safety systems, some connectivity functions and more space than the outgoing generation S60 models. 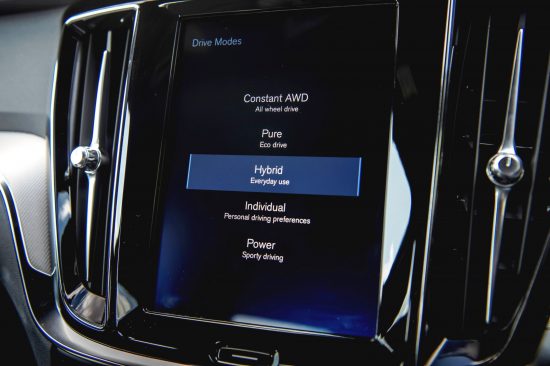 A 9-inch touchscreen control system, sat-nav, voice activated controls, Volvo On Call connectivity, part leather upholstery, heated front seats, gearshift paddles and Drive Mode selector are just some of the R-Design Plus items of specification and of course there are numerous extra cost options and option packs to add to the price. For instance if you want Apple CarPlay and Android auto connectivity functions they are part of a £300 pack.

The S60’s length is now 126mm more at 4,761mm, the wheelbase is 96mm longer at 2,872mm so there is very good rear seat legroom, the width is 17mm more at 1,916mm and the height is a little lower at 1,425mm for the R-Design Plus specification due to wheel size and 12mm lowered sports suspension changes but the T8 Twin Engine models have a standard ride height of 1,437mm.  Boot space is 442-litres for the T5 models but only 390-litres for the T8 Twin Engine versions which loses some space due to the packaging of the rear electric motor for the AWD system. The T8 boot is quite shallow but will still just about accommodate full-size suitcases.

Like other powertrain versions in the range the T8 uses a Drive-E 4-cylinder turbocharged petrol engine with 303hp/400Nm boosted by an 87hp/240Nm electric motor and electric power is served to an 11.6kWh Lithium-ion battery. The AWD system uses an Electric Rear Axle Drive system which provides traction on demand or can be selected when needed for permanent AWD when the engine supplies electric power when the battery is depleted.

In addition to the conventional PHEV plug-in mains charging facility, the on-board hybrid system also harnesses electric generating power through regenerative braking. Moving the gearshift lever to a B setting provides variable strength regenerative braking pressure. I found it took around 4.5-hours to charge the battery from empty to full from a 13amp household socket, about one hour longer than using a 3.7kW supply. Volvo suggests the T8 has an electric power only driving range of 30.4 to 36-miles but in the cold weather prevailing during my time with the test car it was nearer to 26-miles.

Performance is swift and the power delivery smooth with seamless transition between petrol and electric power or a mixture of both and the 8-speed auto gearbox was seamless during changes. The engine was exceptionally quiet most of the time but under hard acceleration it was marginally more vocal.  Top speed is an impressive but never used 155mph and the zero to 62mph acceleration time was a really impressive 4.6-seconds. 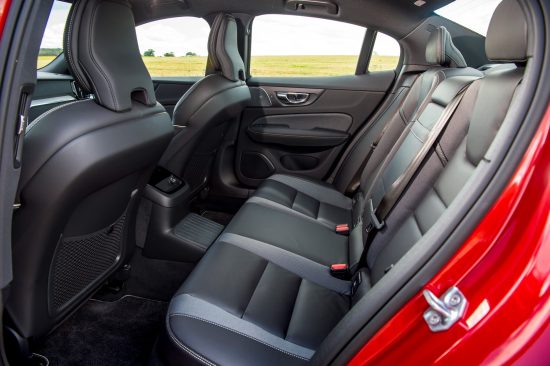 Much less impressive was the real-life fuel economy compared to the new official WLTP figures of 122.8 to 176.5mpg. We cannot blame Volvo or any other manufacturer of PHEVs for these significant discrepancies; it’s just the WLTP testing programme for such vehicles do not reflect real-life driving conditions.

The WLTP test figs for conventional diesel/petrol and petrol/electric hybrids are far more accurate to real-life figures. So, my week of test driving the S60 T8 over a variety of roads and traffic conditions and using the plug-in charging facility each time the battery  power was used up, resulted in a best figure of 102.4mpg for a local round trip of 28-miles which was mostly done using only electric power.  On two 160-mile longer identical same roads journeys the overall figures were 51.2 and 52mpg.

Each of these trips involved around 40 miles of motorway cruising and the remaining distances being mostly on winding A-roads with a small amount of in-town stop-start driving.  More worrying was that by delving into the car’s longer-term driving data via the touchscreen, the test car’s overall average was 36.4mpg over 1,286-miles. 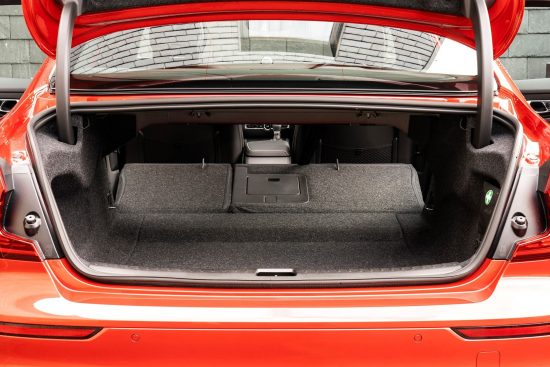 Now I have no way of knowing how the driving was conducted during that period or if it was left ticking over for long periods for whatever reason, but that was the factual figure shown on the car’s computer. Suffice to say I’ll stick with my test drive figures of 51.2 to 52mpg but they are still too far away from the official WLTP Combined Cycle measurements.

That also calls into question the real-life WLTP CO2 figure of 42g/km. That is the figure used for calculating VED road tax and company car tax charges but as fuel consumption and CO2 output are of course related then the real-life emissions cannot be that low over long journeys. We cannot blame manufacturers for these discrepancies but the WLTP testing parameters for PHEV vehicles. 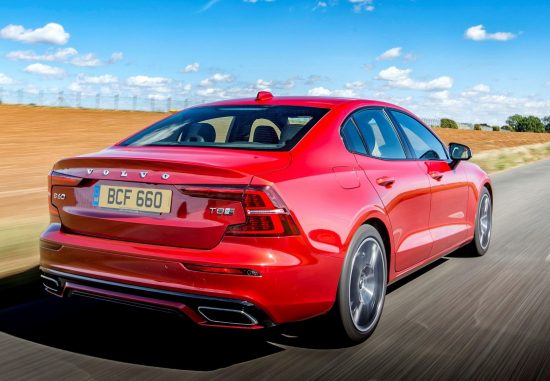 On a lighter note, the new S60 is a much improved medium sized premium class saloon and the T8 AWD version adds capabilities. It handles well, ride is compliant and the extra rear seat legroom is welcome. But it is hard to justify the high purchase/lease costs of the T8 AWD version over the T5 petrol models other than its lower tax costs, fuel economy potential and AWD traction.

Against: High price and too many extra cost options which should be standard for this high cost vehicle, real-life fuel economy didn’t come close to the dubious WLTP testing procedure official figures, infotainment system was comprehensive but not slick or responsive to use, no diesel engine option for the S60 range, ungenerous warranty.