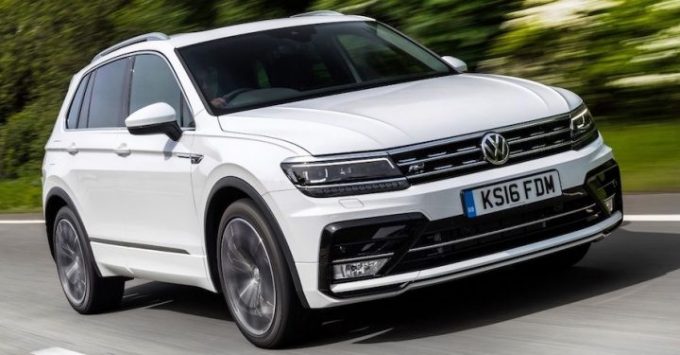 Originally launched in 2007 the first generation Tiguan five-door, mid-sized SUV sold in big numbers, 2.8-million worldwide and 100,000 units in the UK and is VW’s third best selling model in this country after the Golf and Polo ranges.

Now the second generation Tiguan range has just arrived at prices starting from £22,510 for the 1.4-litre 125hp petrol 2WD manual model and will rise to an estimated £36,000 for the yet to arrive 2.0-litre BiTDI 240hp 4Motion R-Line version.

As before there are S, SE, SE Navigation, SEL and R-Line levels of specification. Diesel engines, mainly the 2.0-litre TDI 150hp, will be the most popular choice with diesel engines overall taking 90% of UK sales and there is on average a 50/50 sales split between retail and fleet. A plug-in hybrid version is expected later this year which will appeal to the company car market with its expected sub 50g/km CO2 emissions. The most popular version is still likely to be 2.0-litre TDI 150hp manual with 4Motion all-wheel-drive in SE Navigation trim and priced at £29,745.

The SUV/Crossover sector of the new car market in Europe and the UK has grown hugely during the last ten years and whilst the Tiguan will still have to battle for sales against the top selling Nissan Qashqai, there are now numerous other strong selling competitors such as the Kia Sportage, Hyundai Tucson, Renault Kadjar, Mazda CX-5, BMW X1, Audi Q3, Ford Kuga, Peugeot 3008, MG GS, Skoda Yeti and the SEAT Eteca with more to come.

The latest Tiguan uses the Volkswagen Group’s highly praised modular MQB platform as does the VW Golf/Touran and Audi’s A3/A4/TT ranges as well as mid-sized models in the SEAT and Skoda ranges.

I tried the 2.0-litre TDI with the 150hp turbodiesel engine which is widely used throughout many models in the VW Group family of brands. This version also had the seven-speed DSG twin-clutch automatic gearbox and 4Motion all-wheel-drive. It came with the SEL specification, one grade higher than the most popular SE Navigation trim. The price was a hefty £32,810. 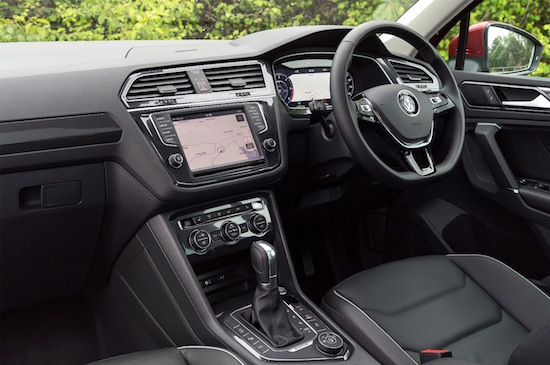 For that money you do get a lot of kit. This includes19-inch alloy wheels, LED headlights and daytime running lights, auto lights and wipers, panoramic sunroof, silver front underbody protection plate and rear diffuser, front heated sports seats, Discovery sat-nav with an 8.0-inch touchscreen, Car-Net with a three-year subscription plus the 12.3-inch active info display screen within in the instrument binnacle (same as the Audi i-Cockpit system), electronic parking brake, adaptive cruise control with radar braking plus all the usual items such as electrically operated windows and door mirrors. With the 4Motion system there are four driving modes; On Road, Off Road, Off-Road Individual and Snow, plus there is the driver profile selections with three settings – Eco, Normal and Sport.

The engine produces 340Nm of torque from 1,750rpm so the power delivery is strong more or less throughout the rev-range. Unlike other VW Group models with this engine, in the Tiguan it sound rather gruff during acceleration before the noise died away once cruising speed had been reached. Mated with the seven-speed DSG auto transmission with power delivery was smooth and the gearchanges slick. It made for refined driving in all conditions and better I suggest than the manual gearbox which I understand requires more gearchanging to get a responsive burst of acceleration on open roads or at lower speeds during urban travel.

Although longer, wider and a little lower for easier access, the new Tiguan continues to be just as capable as the original generation. It is still conservatively styled although it looks more muscular with a bolder road presence it retains an upright stance with none of the rising waistline and sloping coupe roofline of models such as the Qashqai and Sportage. They adopt the athletic Crossover look; the Tiguan is more of a thoroughbred SUV. By not having the rising waistline and coupe roofline the Tiguan has full sized rear side windows so the visibility is better for passengers.

At the front is a higher level active (cushioning) bonnet which reduces the risk of injury to pedestrians and cyclists by lifting upwards by 50mm in the event of an impact. A wide but narrow chrome grille across the front links the two sleek headlight units giving a look of substantial width Other safety features on higher grade models include city emergency braking, automatic post-collision braking, lane assist and pedestrian monitoring. But there is a wealth of extra cost options as well for that all-important up-selling personalisation function so much a part of today’s new car market.

The clinically efficient but conservative styling continues for the interior. The quality is good and the layout is hard to fault, despite its bright detailing and fascia trim inserts it just lacks that ‘sparkle’ to give pride of ownership as its more sensible than stylish. The seating arrangements are efficient as well with well supporting seats, a comfortable driving position, a clear view from all seats and there is more rear seat legroom. 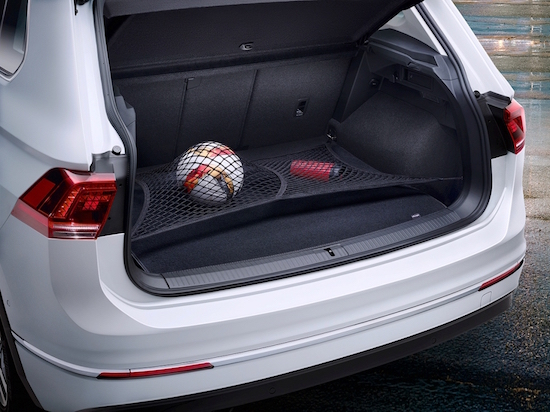 The rear seats split 40/20/40 and not only fold for a large load area they slide and recline as well. The boot is 520-litres but sliding the rear seats forward increases this to 615-litres. With the rear seats folded down the load area is a very useful 1,655-litres, 145-litres than the previous models.

One of the best features of the Tiguan was the ride comfort. Even with the larger alloy wheels the suspension was compliant and easily ironed out impacts from potholes and did away with the unsettled ride over poorer road surfaces. It provided one of the most comfortable rides from the suspension in any new car I’ve tried recently.

The handling was well balanced and impressive feeling securely ‘planted’ with the well-weighted steering able to cope with fast cornering speeds and without too more body-roll. The all-important selectable mode 4Motion all-wheel-drive system added to that grip security on road plus of course it gives the vehicle a reasonable capability for off-road driving conditions. 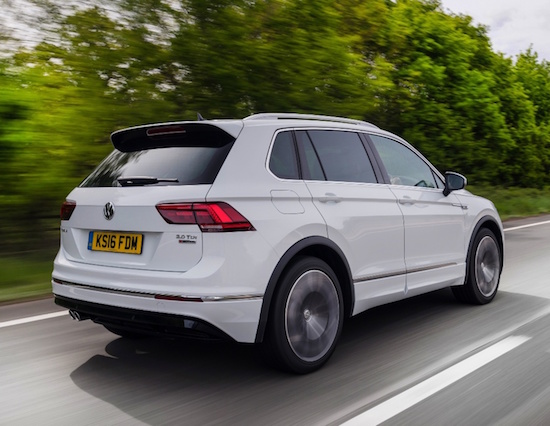 The new VW Tiguan might not be the most visually exciting of the new breed of SUVs to look at but as an overall package of new technologies, high build quality and safe and secure travel, it is a well-rounded vehicle.

It doesn’t have appealing price on its side especially if you delve into the list of extra cost options.

Against: Expensive in a very competitive market sector with lots of choice of other brand’s models, gruff engine.