When we left the UK for our recent two week tour in India just over a month ago, there was hardly a global mention of coronavirus, just the odd mention of a small outbreak in an area of China, writes David Miles.

Now it is a global epidemic.

India is the second most populous nation in the world with 1.38 billion people and like the UK it is now in total lockdown for three weeks. But being India, after initially complying with the order to stay indoors, most recently there has been panic with migrant workers fleeing Delhi and other big cities to escape back to their family homes – potentially taking the virus with them of course. The Indian Government had already stopped international and national flights and tourist visas. Now of course arrangements are being made by various countries to try and airlift home those visitors trapped within the country.

India has hugely varying religious and social cultures and huge discrepancies between the very poor and the very rich. At the time of writing the country had around 1,000 active cases of the Covid-19 virus and over 100 deaths. When we left just over three weeks ago there had been just one reported case but no deaths.

Around 68% of the Indian population are classed as rural dwellers which is surprisingly high when you consider the size of major cities such a Delhi, Mumbai, Kolkata and Chennai. India has around 250 million registered vehicles ranging from motorcycles, cars, buses and commercial vehicles of all types and conditions.  Although new car sales have slowed, prior to the Covid-19 pandemic outbreak,  the most up to date figures show close to 5-million new car and CV sales in the last year and 20-million motorcycles.

India for the year 2018-19 had been the fourth largest car manufacturer in the world producing just over 4-million cars out of a total of 30.9-million motor vehicles ranging from motorcycles to three wheelers, cars, vans, small to huge CVs and tractors. Over 13 million people are employed directly or indirectly in the industry despite a 13% drop in demand for passenger cars last year. BMW, Ford, Honda, Hyundai, Kia, JLR, Mercedes, MG Motor, PSA Group, Renault/Nissan, Toyota, Porsche, Skoda and VW all produce cars in India in addition to the country’s own brands.

By far the largest new car sales brand in India is Suzuki-Maruti and their models command no less than seven places out of the top ten new car sales chart. Their annual domestic sales are around 1.8-million units sold through 3,000 dealers and service centres.

This latest visit to India was our fifth in just over a decade so we have seen most of the main areas of the country but each time we go we see changes have taken place, mostly for the better as far as the quality of life for the majority of the population – but not for all. There has been huge investment in the country’s infrastructure with new high tech businesses, new roads, new houses, improved schooling and health facilities and a fast growth in tourism. The country has, in normal times, over 10.5-million visitors annually, many Brits, Australians and this time we saw more Americans and Germans than on previous visits.  There also seemed to be many more domestic Indians visiting more of the traditional tourist sites such as temples, palaces and forts.

To grow tourism and potential domestic wealth huge sums of financial support has been given to the country by the Unesco World Heritage Fund and areas like the arid Thar Desert  now rely less on a nomadic camel herding way of life and now more on tourism.  Traditional craft and souvenir stalls and primitive villages are now commonplace along the many new tarmac roads which cross the desert. Of course in many of the major towns and cities where tourism still injects money there are still slum areas. The on-going conflict between India and its neighbour Pakistan and the occasional skirmishes between Hindus and Muslims in India itself still take place.

Our latest trip to our favourite part of India was to the princely state of Rajasthan which includes such cities and regions as Delhi, Agra, Jaipur, The Thar Desert region of Khimsar, Dechu and Jodpur then on to Udaipur and back to Delhi for our flight home. This time more than a 1,000-miles was covered in our tour coach with another 300-miles internal flight back to Delhi for departure back to the UK – all in two weeks.

This tour was never supposed to result in an editorial piece, but these troublesome times have prompted me to ‘fire up the PC’. So I delved into our photographic image files and came up with the following generally motoring based pictures with brief captions just to give a flavour of this fascinating country.  If you haven’t been to India go once this health nightmare is over. It’s a fast changing country mostly to the betterment of the residents, until coronavirus came along of course. 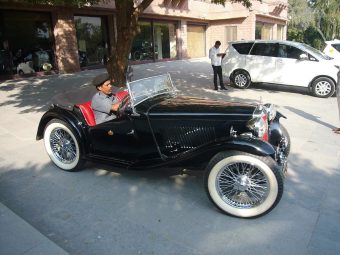 1.A 1946 MG TF getting an outing by the ‘Driver’ for the Maharaja of Khimsar on the edge of the Thar Desert.  This is one of an extensive collection of British veteran cars housed in the air conditioned garages adjoining the Khimsar Fort and Dunes Hotel where we stayed for one night. 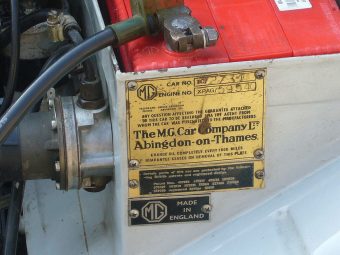 2. The Made in Britain chassis plate for the MG TC. 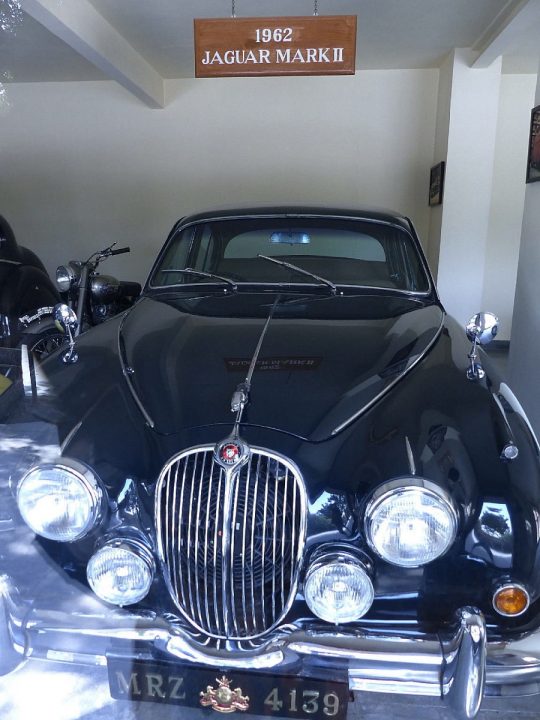 3. A 1962 Jaguar Mark II photographed behind the glass windows of the air conditioned garages at Khimsar complete with their electronically controlled blinds which operate when the sun gets too hot; it was 35c when we were there! 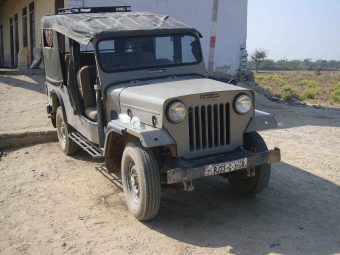 4. A long serving Mahindra jeep is still the rugged vehicle of choice for rural people in the Thar Desert. This one was owned by the schoolmaster. New schools are springing up as the wealth of the former nomadic Thar Desert region improves. 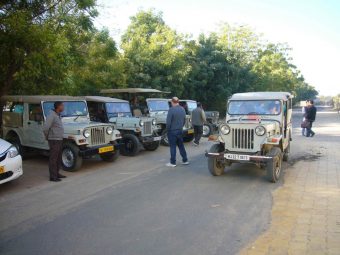 5. The Mahindra Jeep is also an authentic and popular choice for tourist guides who take the increasing numbers of visitors into the remote Thar Desert. 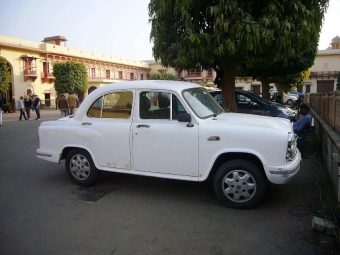 6. Now a rare vehicle the Ambassador, once a British built, from 1956 to 1959, Morris Oxford Series III. Then production was moved to India where it was produced by Hindustan Motors from 1959 to 2014 and was widely used as taxis and Government cars. Today this one is a diplomatic runabout at the City Palace Jaipur, once the capital of India established in 1727. 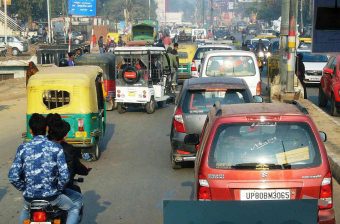 7. Traffic looks busy but this was quiet time on a rural town road. 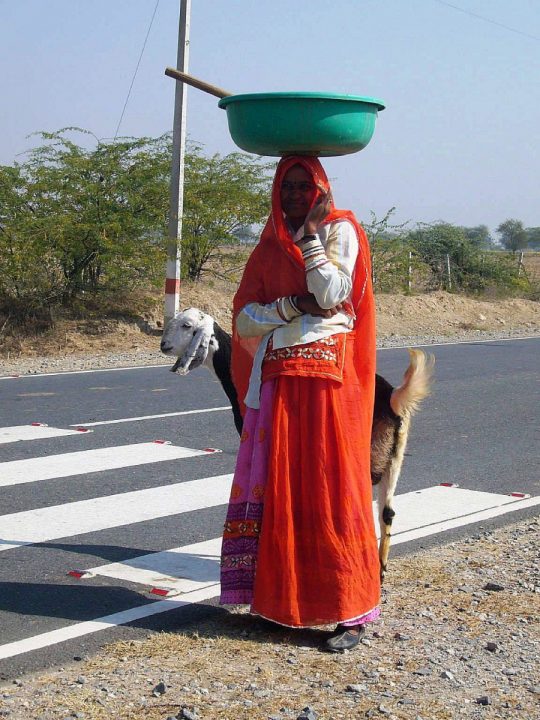 8. Not a zebra Crossing, more a goat crossing. A typical Rajasthan women with her brightly coloured clothes on her way taking the family meal to those tending what limited crops they can grow on the edge of the Thar Desert which is now crossed by numerous new roads to accommodate increasing tourist travel as well as speed up military travel to and from India’s troubled border with Pakistan. 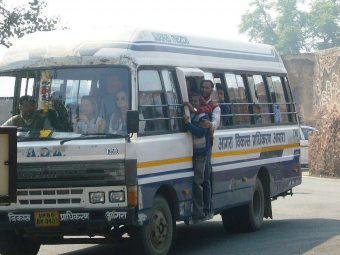 9. All aboard, a local bus used by rural classes as well as back-packing tourists. 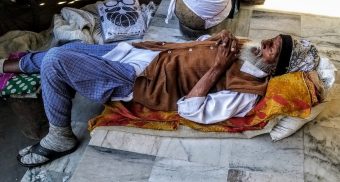 10. Despite the hustle and bustle of a typical Indian street lined with souvenir stalls, this Rajasthan man chills out in the afternoon sun. 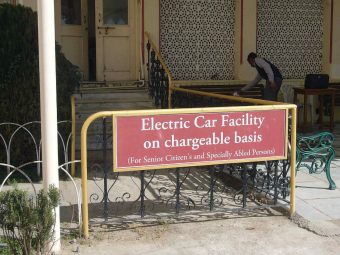 11. Electric cars are not very common on Indian roads but this charging point was ready for business. It’s no more than a 13amp socket at the Udaipur Palace mainly provided for mobility scooters. 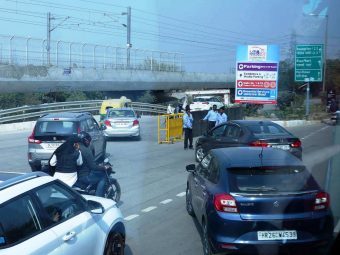 12.India’s Motor Show happened to be on whilst we were there, such was the public interest it caused  huge traffic jams on the main road south of Delhi. 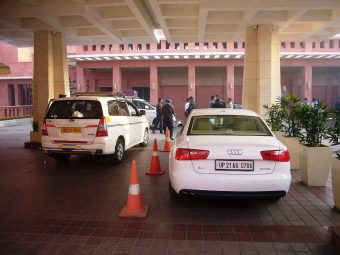 13. Much in evidence are premium brand executive cars such as Audis which are commonplace outside hotels alongside India’s now favourite choice of taxi – the Toyota Innova 7-seat MPV. 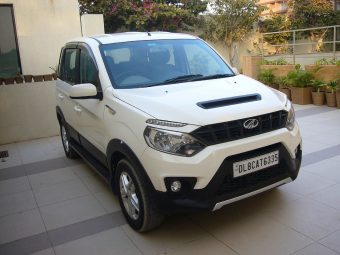 14. The SUV craze is now evident in India and this new Indian brand Mahindra is a good example of what is available in addition to foreign makes. 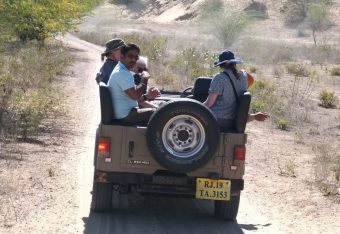 15. Off-roading experiences for tourists are a popular new attraction in the Thar Desert. 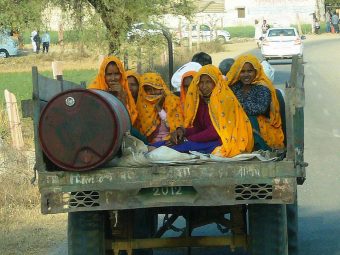 16. A Rajasthan family making their way back to their Thar Desert home complete with a barrel of fuel. 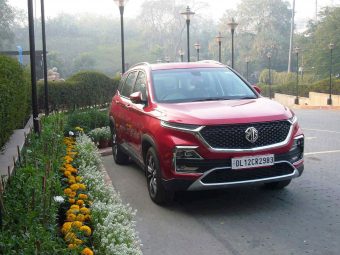 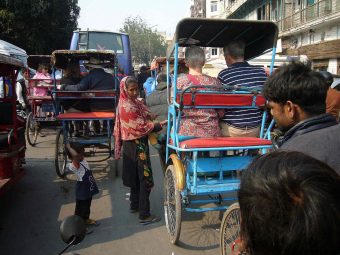 18. Total chaos in Old Delhi as tourists transported by peddle rickshaws jostle with huge crowds heading to the spice markets. 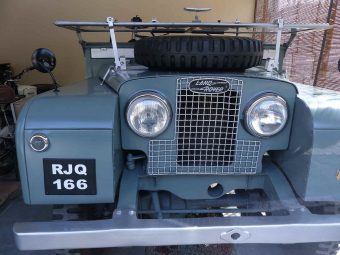 19. A Series 1 Land Rover part of a collection of historic British vehicles at a Rajasthan heritage hotel. 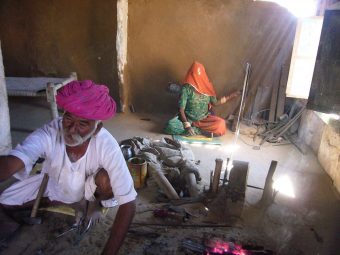 20. A Rajasthan blacksmith and his wife, with the traditional veil covering her face. She operates the homemade bellows to power the forge where her husband makes trinkets to provide income from tourists to the Thar Desert.

© Words and images by David Miles