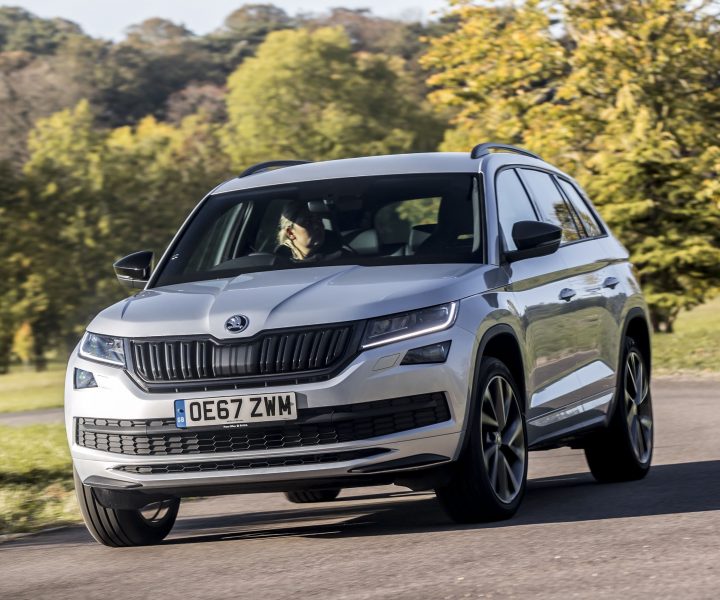 I was due to test the 1.4 TSI  150hp turbo petrol powered model, but that was substituted because under the WLTP changes it is due to be replaced by the Volkswagen Group’s new TSI 1.5-litre 150hp, cylinder on demand petrol unit.

So a 2.0-litre TSI 180hp model with the new Sportline spec arrived instead so full marks to Skoda PR for keeping me mobile. However in this fast changing automotive world I’ve just learned this engine is also due for replacement this year by a cleaner but more powerful 190hp TSI petrol engine which is likely to be a shade more expensive to buy. Current on the road prices covering 44 derivatives range from £25,770 to £40,170.

Despite the engine changes, what we know about now is that the award winning Skoda Kodiaq can be a five or seven seat model depending on the spec chosen. These are SE, SE L, Scout, Sportline, Edition and L&K. A Kodiaq vRS 240hp turbodiesel high performance model shown at the recent Paris Motor Show will join the UK range this year. 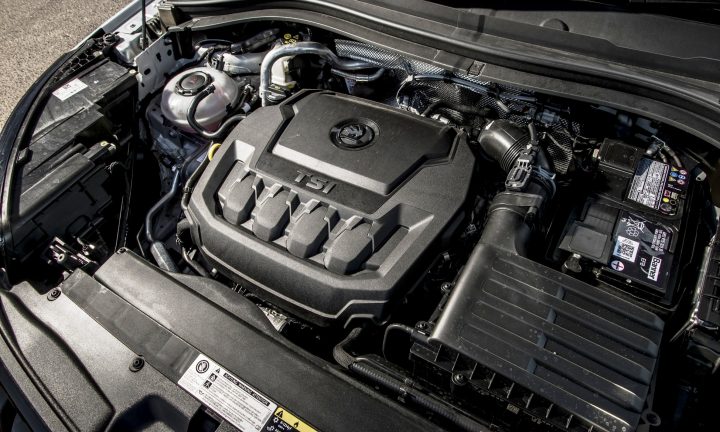 The Skoda Kodiaq large SUV first arrived in the UK in 2017 and I haven’t driven one since then. In the meantime it has received numerous awards based on its versatility, ability, price and specification. In recent times the SUV market in all areas has boomed for sales and SUV ranges from most brands have evolved with more engines, derivatives and additional higher and sports styling specification levels added.

The Sportline spec level, also used for other Skoda ranges, offers the dynamic styling of Skoda’s performance models, but is focussed on practicality rather than speed. But there is certainly no lack of pace from the exiting 2.0 TSI 180hp turbo petrol engine and its slick auto 7-speed twin-clutch gearbox, with the 4WD system providing plenty of adhesion on our soaking wet winter roads. 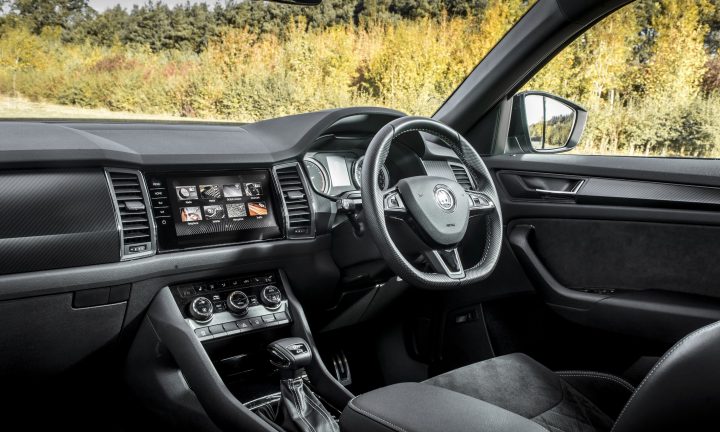 For good measure it has a selectable off-road mode which includes hill descent control, so it’s a very good comprehensive technical package.  With a healthy 320Nm of torque available from just 1,400rpm it is very responsive either travelling along winding country roads or during acceleration on fast open roads.

It cruises with absolute ease at 70mph plus being a petrol engine its very quiet at all speeds and in all conditions.  With our traffic grid-locked pre Christmas driving conditions in stop-start town traffic is was a joy to use.

Another joy of driving was this model’s very comfortable and compliant ride quality.  For a big SUV fitted with eye-catching 20-inch wheels shod with low profile tyres it was a pleasure to travel in.  It’s more often-than-not the case that any car fitted with oversized wheels and skinny depth tyres the ride quality just spoils the ownership experience for a lot of people.

I just wish other Volkswagen Group brands using the same components adopted Skoda’s ride quality and handling settings, it’s just another example of how Skoda differs from its other family members of Audi, SEAT and VW brands. 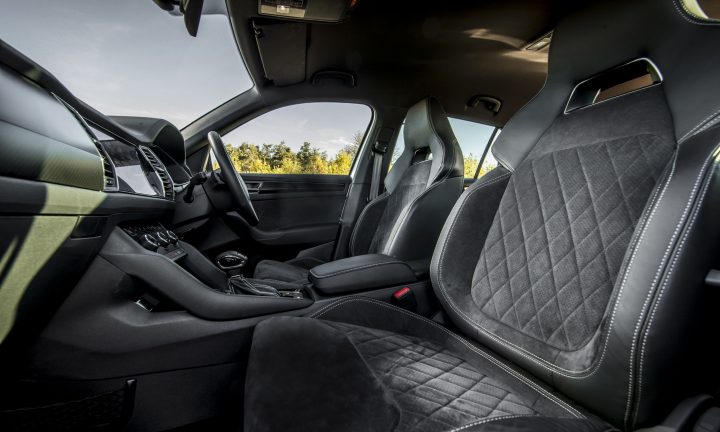 I also wish the real-life fuel economy of the test vehicle was a bit better as it returned 29.7mpg, far short of the 38.2 official Combined Cycle figure. 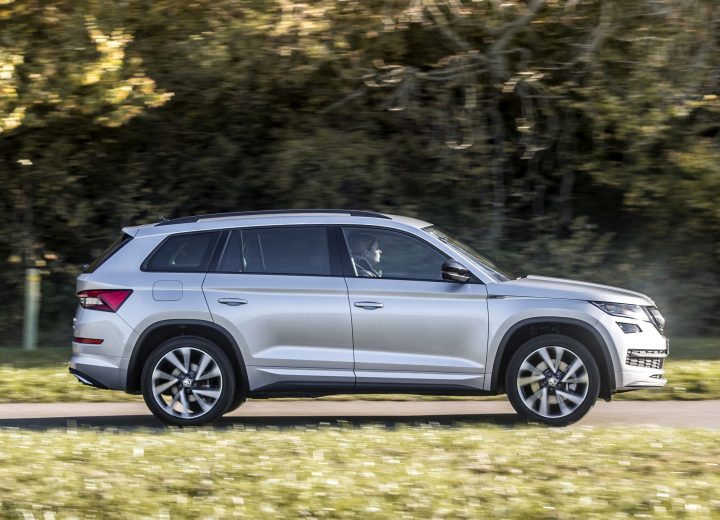 The Kodiaq SUV Sportline, although sporty to drive if required, is all about Sports styling and equipment and it’s a model path followed by most other mainstream manufacturers who have systematically added higher spec sportier looking variants to broaden the appeal of their model ranges. With full order books since it was announced, the Kodiaq Sportline  exterior specification additions include deeper front and rear bumpers, additional black trim details including the radiator grille, roof rails, door mirror housings, window trims and rear diffuser  which is flanked by two chrome trimmed exhaust tailpipes. 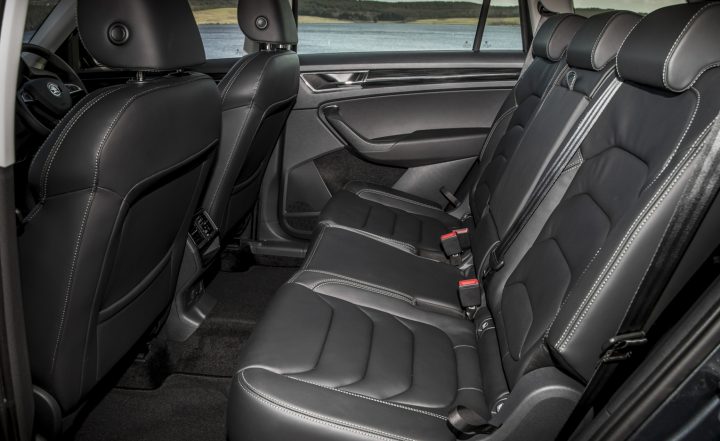 Although the vehicle has front and rear parking sensors a rear view camera would have been useful given its long length. But as always Skoda goes that extra mile to provide customer-friendly products which sets them apart from other VW Group brands as well as most other manufacturers. 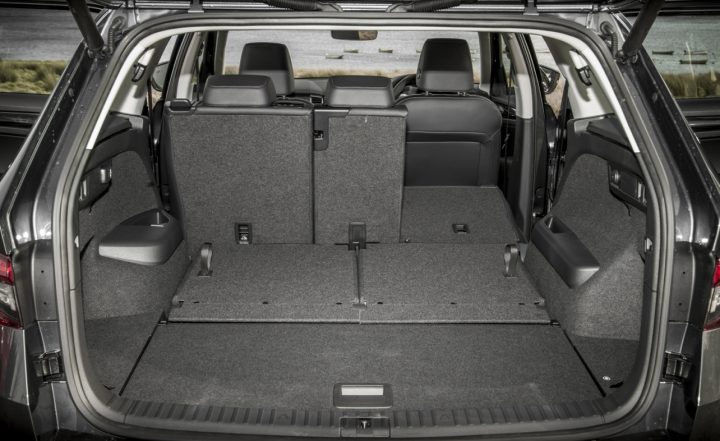 The other benefits of this version of the Kodiaq are its seven seats arranged in three rows which provide numerous layouts for passenger and load carrying combinations.  The rear row of two seats are really only suitable for child passengers but with all seats in use there is still 270-litres of boot space.

Depending on whether the second and third row of seats are either up or down this goes up in stages to a maximum of 2,065-litres. For good measure it also has a braked towing weight of 2,000kg so it’s a really useful workhorse as well. 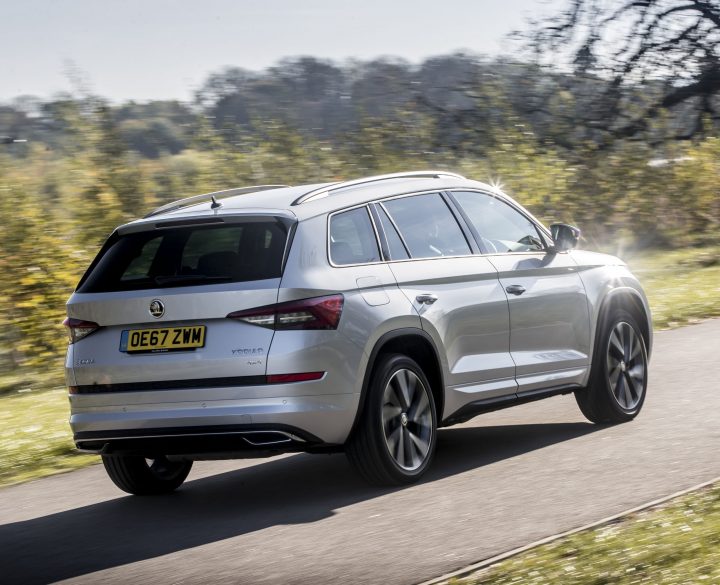 I don’t normally do any Car of the Year awards because what might be best for one person isn’t suitable for somebody else. But in this case my SUV of the Year is the Skoda Kodiaq range because it just offers so much in terms of user-friendly functions, excellent  ride comfort and interior space no matter what engine or spec level is chosen and all at competitive prices.