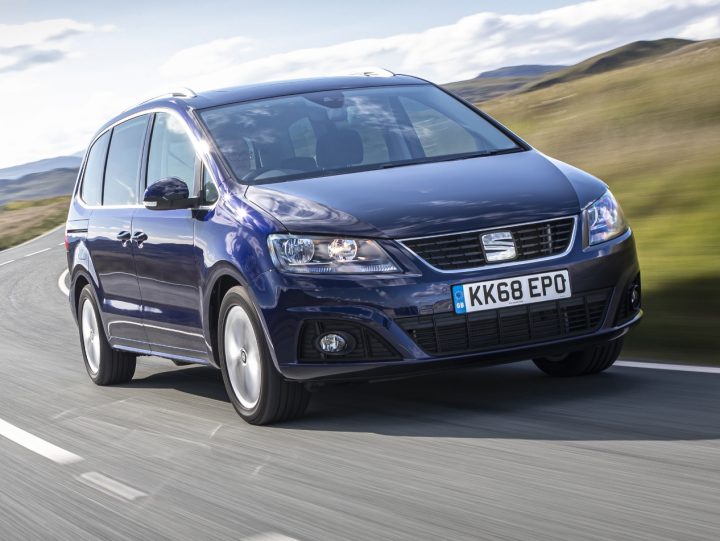 One of the intriguing recent surveys done by Auto Trader, the ‘bible’ for used and new UK car sales trends and figures, showed that the two fastest selling used cars were both MPVs, writes David Miles.

So in the real world of practical motoring requirements are we losing our must-have desire for an SUV or Crossover type of vehicle?  New car sales suggest not but in the UK’s used car market this recent survey has found that the fastest selling used cars are roomier and more practical MPV people carriers.

Is demand being driven by the UK’s better summer weather fuelling the growth in staycation holidays, no doubt helped by the political chaos and uncertainties caused by Brexit and the chaos with travel through airports and tour operators going bust. So perhaps the reality is in these uncertain times we just need more practical carrying space for our travel requirements. 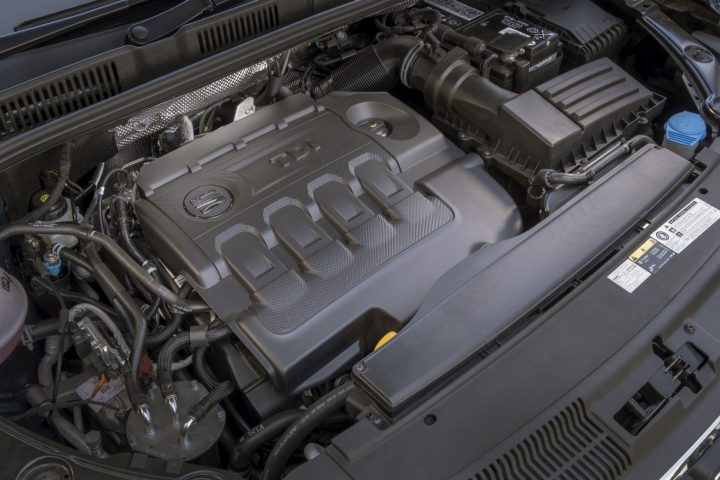 This demand for used MPVs prompted me to take a look at the SEAT Alhambra, not a used one, but the latest current one but with its new 2.0-litre 177hp TDI turbodiesel engine and with its standard fit automatic gearbox. Remember auto gearboxes are a popular choice by used car customers.

The fact that a ‘used’ Alhambra is in such demand is because not many large MPVs are sold new these days. So when a used one becomes available it gets snapped up by eager buyers who have found out that even large SUVs don’t measure up when it comes to our practical needs.

I have seen so many SUVs on our UK roads this summer with large luggage boxes fitted to the roofs providing extra load carrying capacity and just as many SUVs with numerous bicycles strung onto racks hanging precariously from vehicle tailgates. Hence the real need for something just a bit more practical and safer.

The SEAT Alhambra isn’t alone in the large multi-seat MPV market, it competes against its similar VW Sharan stablemate, Ford Galaxy, Ford S-Max, Citroen Grand C4 SpaceTourer and a new generation of angular partly commercial vehicle based models such as the Citroen SpaceTourer, Peugeot Rifter and Vauxhall Combo Life to name just the most popular – but there are more. 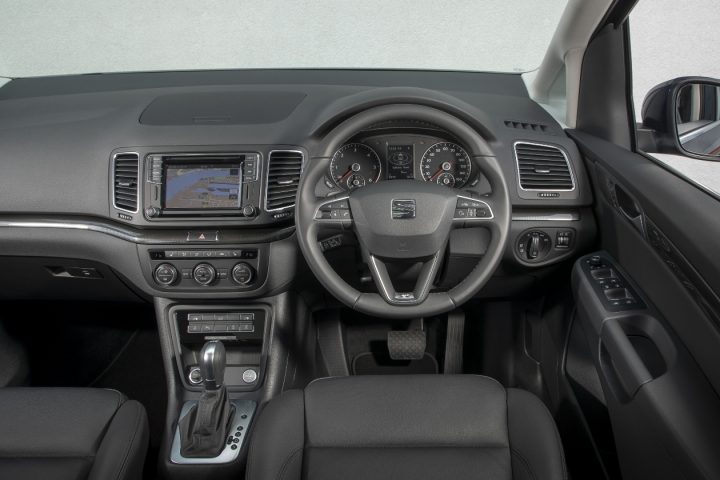 Depending on the engine chosen there are three trim and equipment levels – SE, SE L and Xcellence. Prices range from £30,660 to £38,515. My test model was the new 2.0-litre TDI 177hp with the top of the range Xcellence specification carrying the top price of the range.

Now this engine and specification might be a grade higher than most families and fleet users might want, the 2.0-litre TDI SE L manual priced at £34,780 looks to be the best selling version, but for high mileage business users and in particular business chauffeuring companies my test model would seem ideal.

No matter what specification or engine is chosen all Alhambra models have seven individual seats in a practical angular body design with sliding rear side passenger doors and a full height tailgate.  The seats can be folded individually to configure the interior for the most suitable passenger and load carrying combinations. 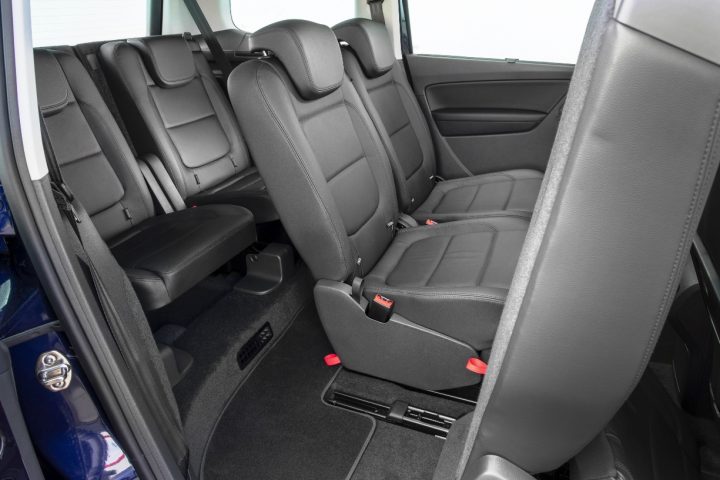 With all seven seats in use there are just 300-litres of load space, with the rear row of two seats folded this goes up to 658-litres under the luggage cover but up to 1,167-litres if loaded to the roof. With the middle row of three seats folded and the rear row also folded down, the maximum capacity goes up to a huge 2,297-litres.

The load area length measured from the tailgate to the rear of the two front seats is 2,100mm but for the more basic SE spec level the front passenger seat can also be folded flat to accommodate objects up to 2,950mm long which should please active sporty types with their paddleboards, surfboards and those cycles, all better inside a vehicle than out.

For even more practicality the new 177hp Alhambra has a maximum braked towing weight of 2,400kg to it will be capable of towing a large caravan or boat as well when required.

As for exterior dimensions the Alhambra is 4,854mm long, 1,904mm wide, 1,720mm high with a long wheelbase of 2,919mm and as the floor is free of any transmission tunnel, being front wheel drive, there is no shortage of foot space or legroom in the second row of three individual seats.

So whether is used as a family bus, carrying of cycles and other long sports equipment, business executives or those people who transport their canine friends on holiday or to dog shows, the Alhambra measures up for a wide range of uses by a wide range of users.

Now it might not have the fashionable street-cred or kerb appeal of the now commonplace SUVs it’s not a bad looking vehicle with its aerodynamic front end, swept back windscreen leading to a practical angular shaped bodyshell and joy-of-joys having sliding rear side passenger doors means that getting in and out of the middle and third rows of seats is much easier in today’s cramped side-by-side stingy parking spaces.

Visibility is good throughout from front to rear with its low waistline and high roof providing large windows and of course the parking sensors and where fitted rear view camera helps as well. Keeping the interior tidy there are numerous user-friendly storage areas and drinks holders.

The front interior fascia and parts of the door trim are covered with soft-touch vinyl textured finishes with printed carbon-fibre trim inserts so they look clean and durable. Centre of the dashboard is a relatively small old-style touchscreen which these days is more functional than fashionable but it does the job – just.

Thankfully there are separate heating, temperature and ventilation controls plus heated seats, heated rear window and front screen and door mirror buttons. All the controls, switches and general layout are typical of those used in most of the newest Volkswagen Group of brands, not the touchscreen though, so functionality is good rather than class-leading.

At the heart of my Alhambra test car was the new 2.0-litre, TDI 177hp 4-cylinder turbodiesel engine. This is one of a number of new or revised power units recently, and still, being introduced to Volkswagen Group brand models to comply with the EU6D Temp emission regulations and new WLTP fuel consumption system. This engine produces a very healthy 380Nm of torque from 1,750rpm which noticeably gives it more low-down acceleration response than the 150hp TDI engine.

It also copes more easily by working less hard to maintain high cruising speeds when carrying a full load. Matched with the slick 6-speed DSG twin-clutch auto gearbox, which is standard for the  177hp TDI Xcellence model, power delivery was prompt and smooth making driving easy at all speeds especially stop-start travel. It was noisier than expected especially under acceleration but that might be down to the vehicle’s bulkhead sound-proofing rather than the engine itself. 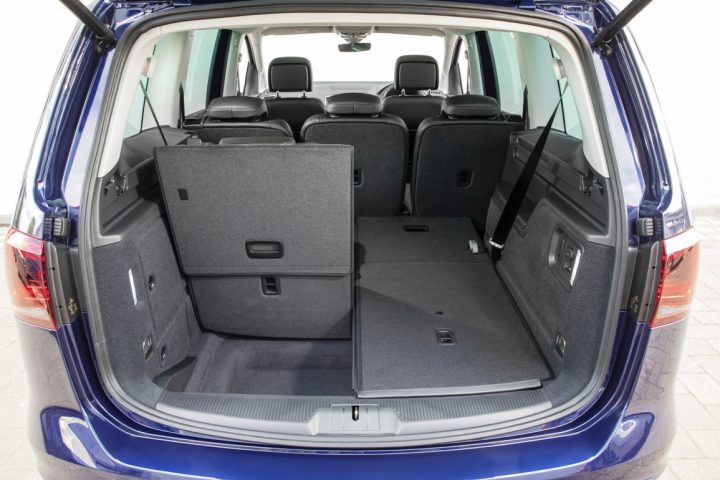 Top speed is 130mph so the legal 70mph cruising speed places absolutely no stress on the engine at all and the 9.3-seconds acceleration time from zero to 62mph easily keeps up with other fast moving traffic.  The extra grunt proved especially useful climbing steep hills when loaded, again in keeping with other passenger vehicle traffic.

Despite its sports suspension the Xcellence model still retained a compliant ride, it just stiffens the suspension to reduce body-roll during cornering given the sportier performance so it felt safe, secure and most of all predictable, all the must-haves for a family wagon. 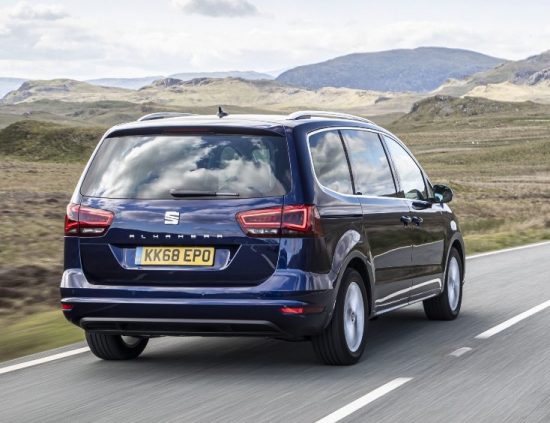 The official WLTP Combined Cycle fuel consumption figures are 38.7 to 40.4mpg and during my week of driving it returned 39.8mpg. New or used, the SEAT Alhambra large seven-seater MPV is certainly fit for purpose and very much in demand if space and practicality are the sensible requirements rather than now too common and less practical family size SUVs.