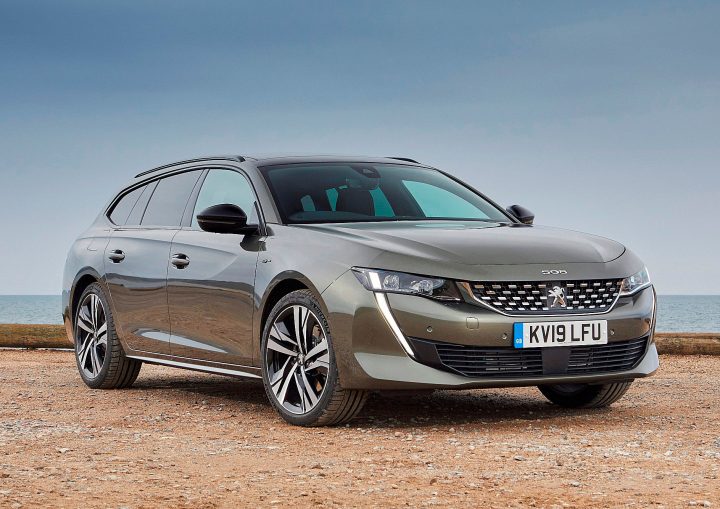 The new Peugeot 508 SW five door five seater estates have recently come to market with prices starting from £26,845 but the wide range of engine choices and specification levels plus options can push the price up to almost £41,000,  writes David Miles.

The new estate compliments the award winning 508 Fastback, a five door, five seater hatchback range launched last year. Both body style share the same engine and spec options with the SW models costing in the region of £1,600 more than the Fastback.

The load space for the SW newcomer is more as well at 530 to 1,780-litres whilst the Fastback is 487 to 1,537-litres. Both have the same long 2,793mm wheelbase so the rear seat legroom is the same, not huge but reasonable. 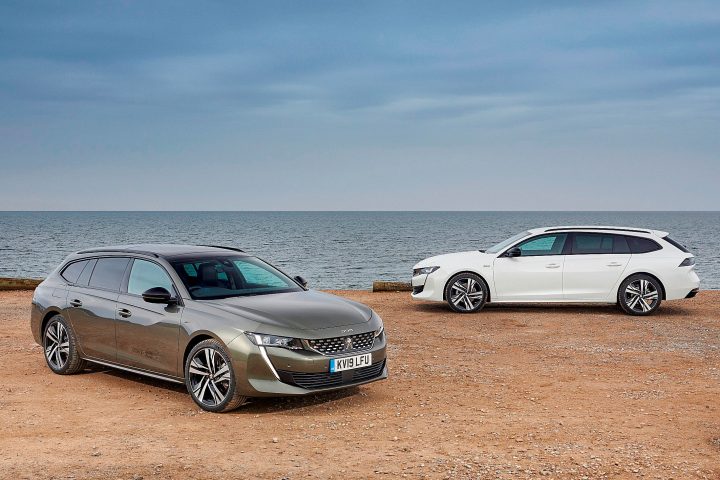 Both sell in what is known as the D-segment, or upper medium sector. Estate competitors for the 508 SW are the class leading and spacious Skoda Superb, the cheaper but roomier Vauxhall Insignia Sports Tourer, Ford Mondeo, Kia Optima Sportswagon and Hyundai i40 Tourer.

Premium brand offerings such as the about to be launched revised Audi A4 Avant, new BMW 3 Series Touring, high selling Mercedes-Benz C-Class and the Volvo V60 are further rivals.

Of course estates of any brand continue to find competition from the ever increasing number of SUV/Crossover types but the recent introduction of more stylish estate cars like the 508 SW, rather than their ‘boxy’ predecessors, appeal to those buyers wanting something less commonplace than an SUV.

Down to the nitty-gritty information about the Peugeot 508 SW range. It is available in Active, Allure, GT Line, GT, and for an exclusive limited-number only, First Edition specification levels. Deliveries began last month.

All 508 SW models feature the latest generation of Peugeot’s i-Cockpit with a configurable 12.3-inch head-up digital instrument panel in front of the driver, either a ten-inch or eight-inch touchscreen and a compact multi-function steering wheel as standard. There is a wide range of safety features as standard including Emergency Brake Assist and speed limit recognition and recommendation. MirrorLink with Apple CarPlay and Android Auto is also included as standard in every model. 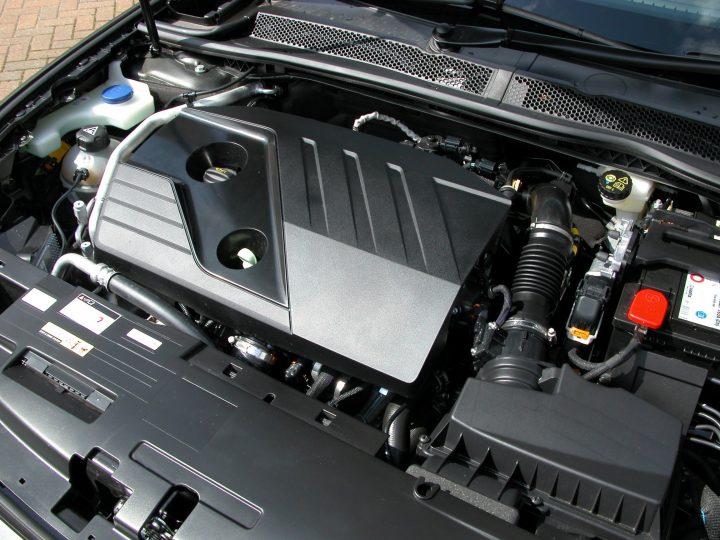 The range of EU 6.2 compliant engines are two new petrol options and three diesel units, based on the 1.6-litre PureTech petrol 180/225 outputs, 1.5-litre BlueHDi 130 and 2.0-litre BlueHDi 160/180 turbodiesel engines. Only the 1.5 BlueHDi turbodiesel engine has the choice of a 6-speed manual or 8-speed automatic gearbox, all other engines have an 8-speed auto gearbox as standard.

Like most of its competitors the 508 SW will appeal mainly to company car users where there needs to be many rungs on the company car ladder of entitlement. So like the engine choices the spec levels are numerous. The Active trim features 17-inch alloy wheels as standard, alongside Connected 3D Navigation with live updates, electric driver’s seat-base and lumbar adjustment, automatic headlights and DAB radio as standard. Prices for the Active trim start from £26,845 on the road.

In Allure trim (and standard on all petrol versions) the vehicle gets Active Suspension, plus Active Blind Spot Detection and Smartbeam Assistance, as well as Open and Go (keyless entry and push button start). Inside, there is a 10-inch High Definition touchscreen, electric driver and front passenger seats and a 180-degree colour reversing camera. Prices start from £28,145. 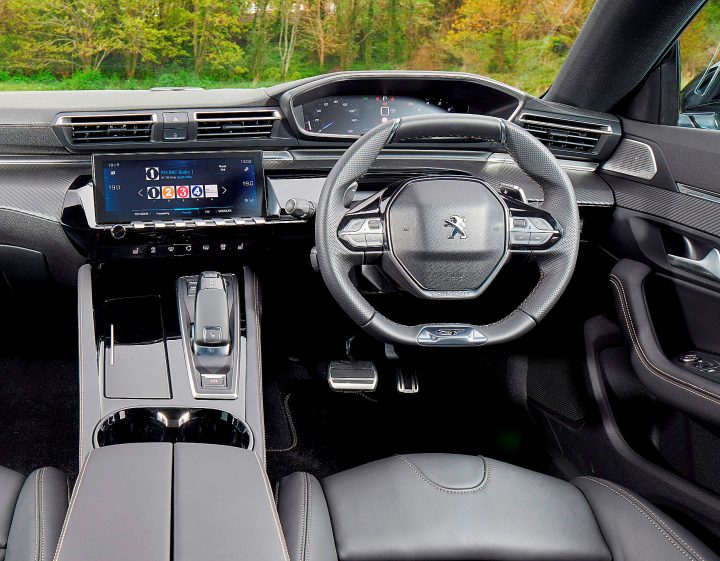 Although designated as 180 this 4-cylinder turbodiesel unit has a power output of 177hp and a strong 400Nm of torque from 2,000rpm. Top speed is 144mph and the zero to 62mph acceleration time is 8.4-seconds.  During my week of test driving over motorways, country roads and lanes plus the usual in-town congestion, it returned 44.2mpg which, given its performance and responsive mid range acceleration when needed, was very good and having the 8-speed standard fit automatic gearbox provided added refinement.

Whilst the 1.5-litre BlueHDi 130 (131hp) turbodiesel unit will attract most UK registrations as befits the company car market, this 2.0-litre engine gives the 508 SW better all-round performance for high mileage drivers. It has the pace to go with the sporting looks. Generally it a quiet engine as well even during high speed cruising, there is far more road noise generated by the fitment of 19-inch alloy wheels and their low profile tyres. These also provide a firm ride over poorer road surfaces where broken tarmac and indents in the tarmac are heard and felt inside the car. 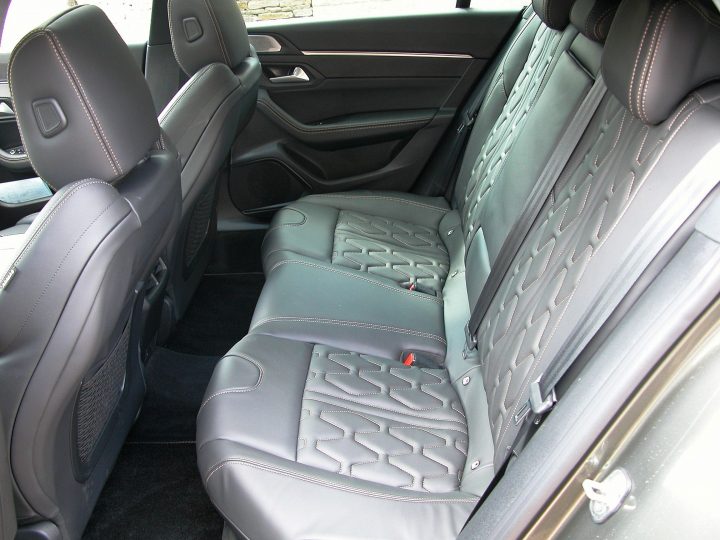 Fortunately the GT spec level had Active Suspension so selecting the Comfort mode, whilst it loosened the handling during cornering; it did soften the ride to a compliant level. The Comfort mode and Eco modes were the most useful settings with Eco best selected for high speed cruising on motorways with good surfaces.

With the i-Cockpit small diameter steering wheel, common to most Peugeot models, steering responses were sharp and accurate although as I’ve already said Comfort mode does bring looser handling into play.

The front interior layout of the 508 SW is the same as the Fastback hatch model, generally well place controls, although Peugeot are still persisting with including the temperature, heating/ventilation and air-con functions within the touchscreen operations which is not good.  The GT spec dashboard had nice coverings of carbon fibre effect trim and the seats were large and generally very comfortable.

The rear legroom is not class leading but will suffice for adult passengers. Whilst the headroom will also suffice once inside the estate, even allowing for the sunroof option, being tall I found the lack of headroom provided by the door frames to be a real inconvenience and the width of the B-pillar restricted side vision at junctions. The vision to the rear and rear quarters was also limited due to the high waistline and low roofline but that was somewhat offset by the rear/side view camera system and the dipping rear view door mirrors once reverse gear was engaged. 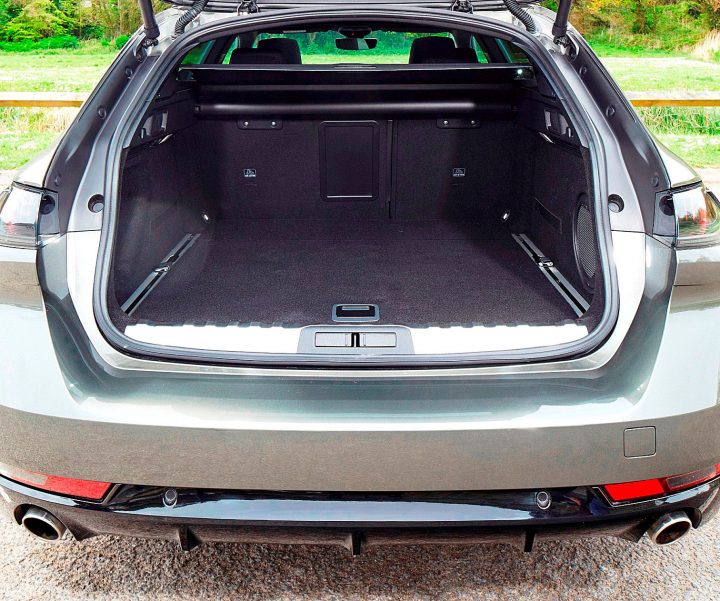 At the rear is a wide tailgate give access to a roomy 530-litre boot which extends with the 60-40 split rear seat backs folded down to 1,780-litres, certainly large but not class leading.  This version of the 508 SW estate also has a useful braked towing weight capacity of 1,800kg. 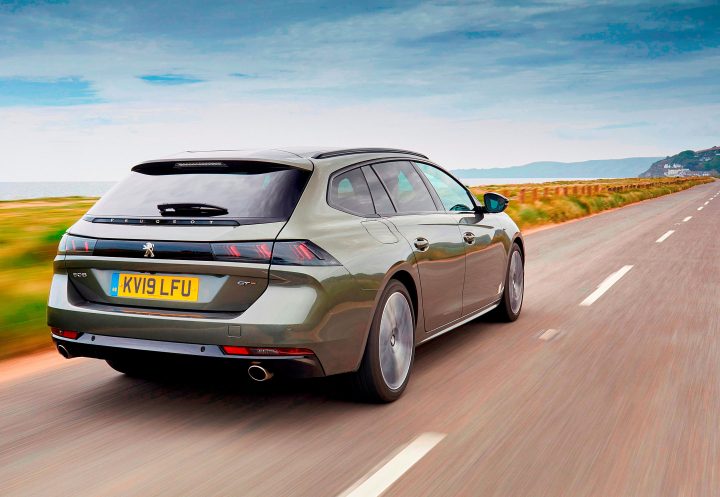 Overall the Peugeot 508 SW estate should be a strong sales contender in the D-sector new car market where business sales and leasing contracts dominate registrations. But care is needed to choose the right variant with the right specification level to minimise tax costs. So a less powerful engine and a lower spec level with fewer options might be a better choice than my GT 2.0-litre diesel model which was more expensive than most of its non premium brand competitors.

Against: This version is pricey with options and so incurs extra VED Standard rate tax costs, firm ride with its large wheels, some side/rear/rear quarter visibility restrictions, limited headroom through the door frames, heating/ventilation/air-con controls operated via the touchscreen, ungenerous standard UK warranty.