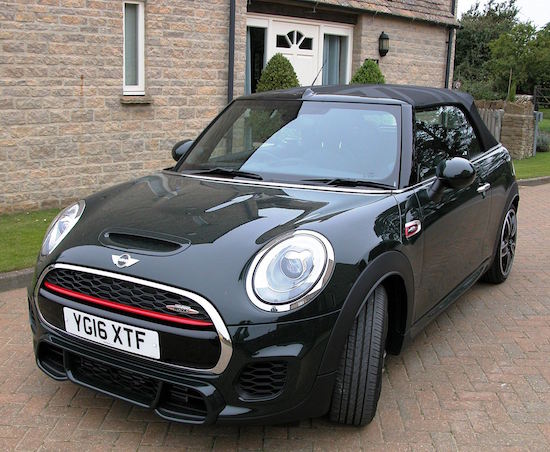 A lot of convertibles can be more show than go, but not the top of the range Mini John Cooper Works (JCW) Convertible.

This version is indeed Posh and well equipped and of a high quality but this one also boasts lots of ‘Pecs’ with its muscular styling and high powered 2.0-litre, 231hp turbocharged petrol engine.

The is a potent race-bred top of the range version of Mini’s third generation (under the parentage of BMW) 2+2 seater, two door soft-top priced at £26,630 for the six speed manual version or £28,205 for the six speed Steptronic sport auto. But delve into the options pack and the price can go up to as much as £35k.

With lower powered Cooper, Cooper DS and Cooper S versions priced from £18,475 the UK remains the top selling global market for the Mini Convertible with close to 30,000 registrations between 2011 and 2015 for the outgoing range. All versions continue to be built at Mini’s Plant Oxford facility. For the first eight months of this year UK Mini sales of all models are up by almost 7% to over 38,500 units making it the eighth best selling model range in the top ten sales chart.

The new Convertible is based upon the larger and latest generation Mini Hatch with two passenger doors but in reality it remains a 2+2 four seater. However there is slightly more rear seat space than previous versions – but not much. Better news is the boot volume has been increased by 25% offering 215-litres with the roof up and 160-litres with it down. The improved insulated fabric roof can be electrically operated at speeds up to 18mph and there is fully integrated rollover protection.

The new Convertible has an overall length of 3,821mm or 3,874mm for the Cooper S and JCW versions with their larger sports bumpers. All models are 1,727mm wide, 1,415mm high with a wheelbase of 2,495mm. Compared to the outgoing soft-top version there is 98mm extra length, 44mm extra width and 1mm extra height. The wheelbase is 28mm longer and the track width has grown by 42mm at the front and 34mm at the rear.

The new two-door Convertible adopts the styling changes from the Mini three and five door Hatchbacks and the six door Clubman estate. There are the signature new generation larger headlights, a wide grille, rounded front wings and at the rear are recognisable large tail-lights. The front exterior for the JCW version has a bolder front bumper with larger air intakes and the rear bumper follows the same sports theme. The fabric roof has been upgraded in terms of better acoustic performance, heat insulation and smoother electric operation. It’s still pram-like in design as it stretches from the upright windscreen right to the tail of the car where it folds into the top section of the boot.   Rear and rear quarter visibility has not been improved with the roof up so thankfully it has rear parking sensors and a rear view camera.

The larger overall size of this latest generation of Mini allows for improved interior space and better – but not perfect access for the two rear seat passengers and more headroom. Standard equipment includes electric windows, air-con, the 6.5-inch screen positioned in the huge circular central display, Mini DAB radio, Bluetooth, Mini Connected, rear parking sensors and a reversing camera. The spec increases as you move up the ladder of variants and of course there is a wide range of options and option packs, all part of the well known Mini personalisation sales programme. 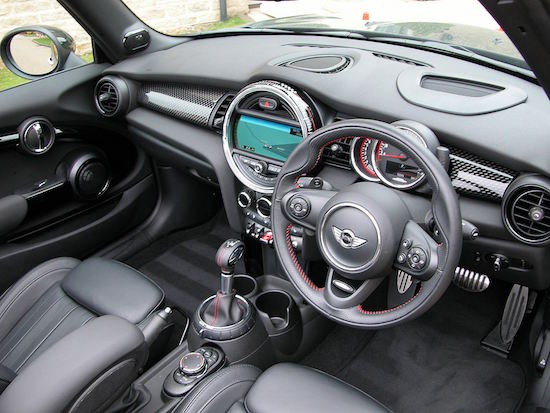 Even using it around town I felt the auto gearchanges too slow and ponderous. The Mid mode is really the best for most driving conditions before selecting Eco once cruising speeds are reached. Sports mode is self explanatory and ideal for track days, not likely with a convertible, but can used more often when our congested UK roads are not quite so busy and you will enjoy the enhanced sound track from the twin tailpipes.

The six-speed auto changes were fast and slick and it can be left in full auto or by use of the gearshift paddles for more driver involvement.

The JCW Convertible is fitted with a sports suspension which is firm riding for sure but not too uncomfortable on better road surfaces. However there is added road noise intrusion from the sports 17-inch wheels and 205/45 tyres. Wind noise intrusion through the fabric roof was relatively low and with the roof down the wind blustering into the interior with the windows up was modest thanks to the high waistline. The handling remains agile as we expect from any Mini, the steering needle-sharp and the four-piston calliper Brembo brakes powerful. With the lack of a rigid roof there was some body-flex, common with most convertibles, during cornering and when the car became unsettled over undulating road surfaces.

Core to the JCW Convertible’s performance is the 2.0-litre, four cylinder direct injection petrol engine with variable camshaft control for the inlet and outlet valves. In common with other new generation BMW petrol units the turbocharger is integrated into the exhaust manifold to improve the engine warm-up time lowering CO2 emissions and improving fuel consumption. Developing 231hp this unit provides an additional 39hp over the Cooper S version.

Most importantly is the 320Nm of torque which is available from a very low 1,250rpm right through to 4,800rpm. This gives instant amount of response and acceleration ‘grunt’ from very low engine speeds with a wide power band so for the majority of driving time, from traffic congested roads through to high speed cruising, there is always ample power as long as the Eco mode is not selected.

During my test driving the auto version returned an overall figure of 37.8mpg for town and country driving but with little opportunity to give it some severe treatment as the driving period coincided with the hoards of motorists on holiday. 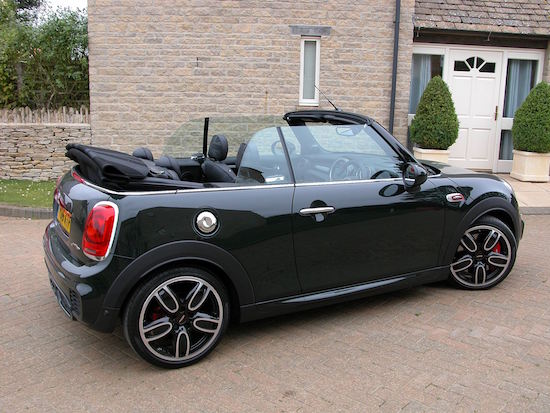 So this is Mini’s fastest ever Convertible but it comes at a price. On the right road and with the right traffic conditions it is enjoyable but the advantages over the cheaper Cooper and Cooper S versions are hard to justify. Not only will you save money for marginally less performance but their ride quality is better as well and the specification is still good.

For the Mini enthusiast who wants that JCW performance and image the three door Hatch is a better choice and over £3k cheaper.