In the 58-year history of Mini , the all-new second generation Countryman five door Crossover/SUV type is the largest ever to go on sale, says David Miles.

UK deliveries started in February with prices from £22,465 and running through a 17 model range up to £32,275. These on-the-road prices will marginally incrase after the new First Year VED rates come into force from April.

Currently the Countryman range has Cooper, Cooper D, Cooper S and Cooper SD variants with two or ALL4 traction plus the just announced Cooper S E ALL4 petrol/electric plug-in hybrid and the top of the range higher performance John Cooper Works ALL4.

The first MINI Countryman under BMW Group’s ownership was launched in 2010 and more than half a million of them have been sold worldwide despite its odd styling and compact interior.

The latest all-new incarnation is 200mm longer with a total length of 4,299mm. It is also a shade wider at 1,822mm. It uses the latest BMW small/medium car platform also used for the relatively new Clubman estate and the BMW X1 SUV.

So it has more interior space and more equipment plus a huge range of must-have extras and personalisation options. It might be new but it still retains its chunky styling. It certainly divides opinions and some say its ‘bloated’ or a MINI on steroids and it is either a design you like or loathe – let’s just say it’s distinctive and it looks like a MINI albeit a maxi one!

My test version was the likely best selling Countryman 2.0-litre 150hp Cooper D but with ALL4 on-demand 4WD and six-speed manual gearbox priced at £26,025. The automatic transmission version costs £27,620. This is a significant price hike over the previous generation but the engines are new, the vehicle is roomier and the standard specification is higher.

A powered rear tailgate costs an extra £375, a fold-out picnic bed £150, a sliding rear seat bench £300 and Piano Black interior styling inserts £320.   My test car also had the £550 British Racing Green bodywork colour with a black roof, black plastic wheelarch protection and lower body cladding. Sounds nice but given the size and bulk of this car it didn’t give the kerb appeal which is so important. The brighter bodywork colours seem to suit the Countryman better I think softening its raised height and slab-sided boxy styling.

Inside the design is typical latest generation MINI with full width dashboard and its large centrally positioned huge round dial accommodating the sat-nav, infotainment and connectivity functions. This central display is surrounded by multi-colour LED lighting which changes colour according to speed, driving mode and other settings.

Below that are the proper easy to use heater controls and the usual toggle switches including the start/stop switch. The speedometer and other conventional instruments are housed ahead of the driver. As with BMW models the centre console houses a rotary controller plus buttons to select various functions such as media and the sat-nav map.

The interior, in addition to being roomier with more elbow room and more rear seat legroom and a slightly larger boot, is as classy as ever, premium class in fact with soft-touch trim in most places. The seats are comfortable and the elevated driving position is good to see out of what is now a fairly big and substantial car.

The rear seat passengers, ideally no more than two adults and a child, will enjoy the improved leg room provided by the 75mm longer wheelbase and the sliding bench seat and reclining seat backs are nice changes. Tall six-footers might still struggle for knee room on longer journeys. 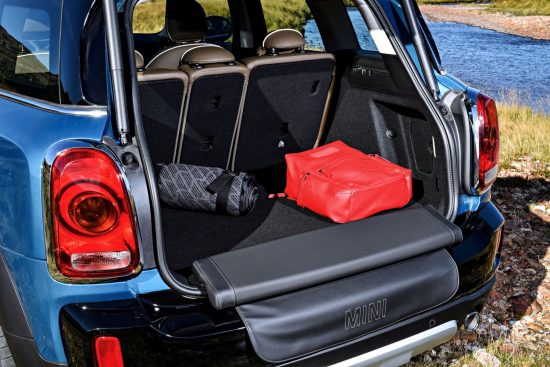 The rear seat backs fold down individually in a 40/20/40 split configuration to extend the capacity of the 450-litre boot to 1,390-litres which has a flat load floor although the folded down seat backs are slightly higher than the boot floor. Access to the boot is through a wide rear tailgate with no higher rear sill to lift items over.

The 2.0-litre, four-cylinder 150hp turbodiesel engine has 330Nm of torque from 1,750rpm which will be sufficient for most higher mileage users but those using the vehicle for the school run or driving limited distances might well opt for the 1.5-litre three-cylinder 136hp turbo petrol unit but it being a weighty vehicle the diesel engine will provide a more ‘rounded’ performance.

The 2.0-lite turbodiesel unit has an official Combined Cycle fuel consumption figure of 58.9mpg with those all important CO2 emissions of 127g/km. Under the new VED rules this MINI Countryman bought after the 1 April this year will have a First Year rate cost of £160 and then £140 for each year after that. Prior to April the VED costs were £0 and then £110.

Company car drivers will now pay 27% Benefit-in-Kind tax an increase of 2% over the pre April rate. Insurance rates are yet to be confirmed but expect them to be roughly the same as the outgoing models, in the case of the 2.0 Cooper D ALL4 Group 14E.

During my week long test driving the Countryman 2.0 Cooper D ALL4 manual returned a real-life fuel consumption figure of 44.2mpg and most of that was done in the Green (ECO) mode setting. Given the high volume of traffic selecting Green mode seems the most sensible; we don’t get anywhere in a hurry these days and given the torquey response for the diesel unit Green mode driving was no hardship in town or in the country.

In no way is this engine a frugal on fuel tardy diesel engine, it likes to be revved but it’s still responsive from lower revs right through the mid-range and it’s remarkably quiet once warmed-up.

Generally the ride comfort was good although poorer road surfaces unsettled the handling but despite its raised ride height the latest Countryman provided a stable platform. It feels a weighty and sold car but it retains its sharp handling, perhaps not as nimble as the latest MINI Hatchbacks but agile enough with its quick steering response, wider track and the ALL4 grip at each wheel provides good cornering stability.

The on demand ALL4 traction provides enough traction for light off-road travel away from tarmac surfaces and is well able to cope with tracks and grassy fields and of course provides added on-road driving security during Winter conditions. It seemed to shrug off impacts from our ever worsening potholed roads as well.

There is no doubt the latest Countryman is a better car overall than before. It’s more expensive and its design is an acquired taste so some potential customers will be tempted to go for what I would call proper compact SUVs.

But none of these offers the premium brand ownership desirability the ‘well-healed’ buyer gets from the MINI Countryman in whatever specification level the discerning customer requires.

Engine/transmission: 2.0-litre, 4-cylinder 150hp turbodiesel with 330Nm of torque from 1,750rpm, 6-speed manual with ALL4 traction

Against: expensive with a significant price increase over the outgoing versions, chunky muscular styling divides opinions, firm ride at times, less money will buy you a roomier and more conventional compact/mid-sized SUV, real-life test driving fuel economy even in Green mode fell too far below the official figures.