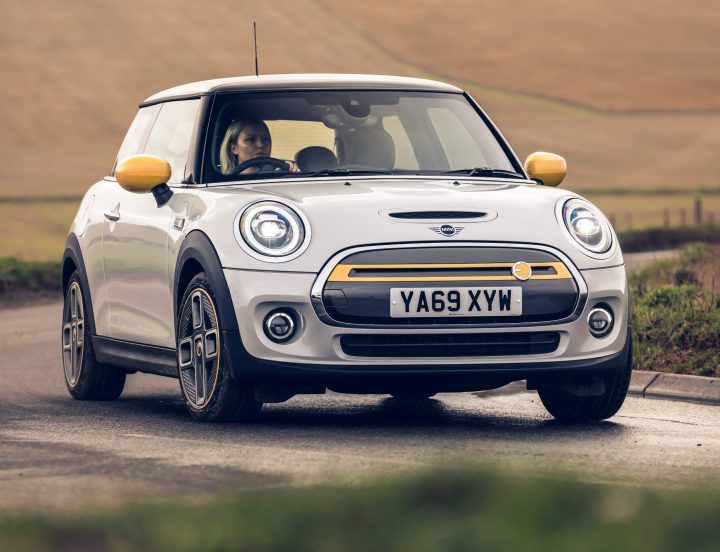 The original Mini designed by Sir Alec Issigonis came about because of the Suez crisis and the subsequent petrol rationing creating a demand for affordable motoring, David Miles reminds us.

In an answer to that call the first petrol powered Mini rolled off the production line in Oxford in 1959 and so the global success story of Mini started.

Today with a world facing new social and economic challenges the first ever electric powered MINI now rolls off the Oxford production lines where the original Mini story began six decades ago.   Despite the chaos of the coronavirus lockdown, sales of BEVs, (battery electric vehicles), in the UK have increased by 158.6% to just under 31,000 units for the first six months of this year. This is a far higher increase than all other types of alternatively fuelled vehicles.

The MINI Electric is only available as a compact three-door hatchback in keeping with its commuter/city car roll in life. It has an official WLTP rated driving range of up to 145-miles on a single charge due to its compact battery size.

Prices through three spec levels range from £24,900 to £30,900 after the Government’s £3,000 Plug-In Grant has been applied. MINI expects a high proportion of UK customers will rent their car so the range starts off with a monthly rental rate of £299 for 48-months with an initial £4,500 rental cost.

Apart from the £3k purchase grant and the average 4p per mile running cost for electricity use, a big draw for users will be the £0 cost in VED road tax and the £0 cost in company car Benefit-in-Kind tax plus for those London commuters there are no Congestion or Low Emission Zone charges.

The zero to 80% charging time is 3 hours 12 minutes using a 7.2kW wallbox electricity supply or 36-minutes using a public 50kW rapid charger. Using a domestic 13amp socket and you are looking at around 12-hours for a full charge. The vehicle comes with both home and public charging cables as standard. 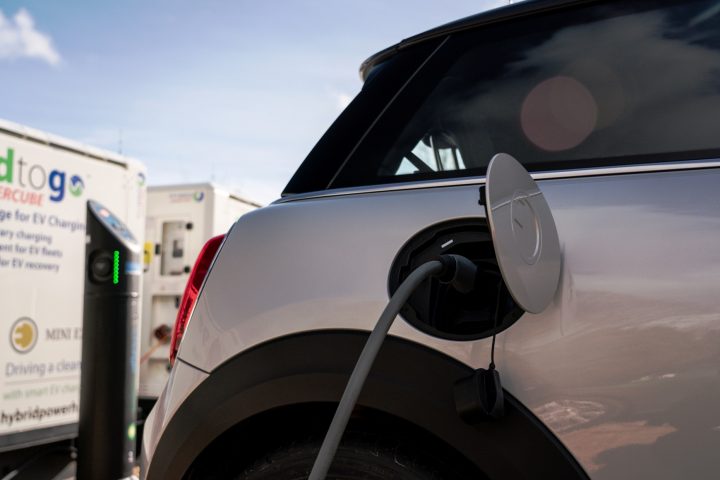 MINI’s own data about electric car driving range is that the average distance driven each day by a commuter is 26-miles so their MINI’s 145-mile driving range is not an issue. In accordance with new EU law the car is fitted with an acoustic pedestrian protection system for low speed driving.

The new MINI Electric isn’t alone of course in the fast growing all-electric car market, it has numerous competitors of all sizes, prices, capabilities and most questionable of all – driving range from a single full charge. One of the reasons the MINI Electric is very competitive for price, how often can we say that, is because of its limited driving range. Other models such as the Renault Zoe, Peugeot e-208, Nissan Leaf, Kia e-Niro and Hyundai Kona Electric have driving ranges doubling that of the MINI but are more expensive to buy.

For many people going electric now is still  a huge leap of faith because will this country eventually getting a fully integrated public charging system with seamless payment facilities, will charging times shorten?  For example it takes 10 minutes maximum to fill up with a petrol or diesel car compared to over half an hour at least on average for an electric vehicle’s public ultra-fast charging point.

These are just some of the many issues and messing around when you get home from work with charging cables on a wet winter’s night ready for the next day’s commute is no fun. Neither is planning your longer journey around finding charging points en-route which might be working – or not. Range anxiety about all-electric cars will still a major issue for most people until the UK gets a proper public electric vehicle integrated charging system. 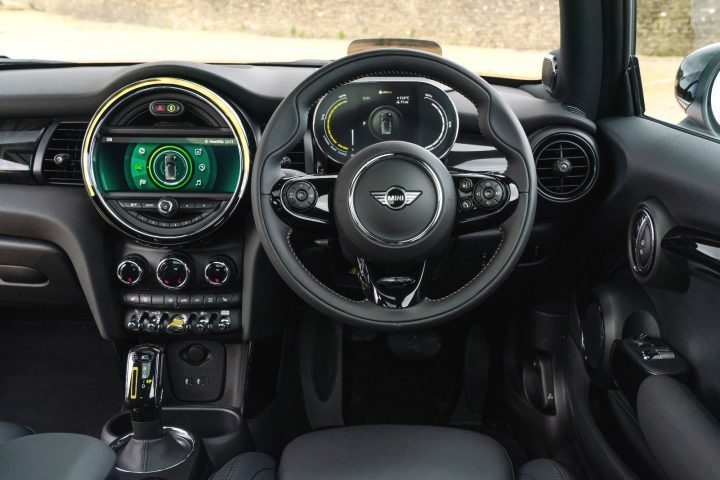 The MINI Electric was first revealed towards the end of last year with global volume production at Plant Oxford starting this year with first deliveries to customers due by early spring. Of course the COVID-19 lockdown derailed that programme so it’s only now that MINI Electrics are getting to early adopter customers.

All Electric models have the body shell of the MINI 3-Door Hatch but with a closed front grille as the car requires less cooling and this also improves aerodynamic efficiency as do the enclosed underbody panels, rear apron and bespoke aero alloy wheels. An embossed MINI Electric logo appears on the car’s front side panels, grille and tailgate.  The charging plug is located above the right rear wheel where the fuel filler would normally be. 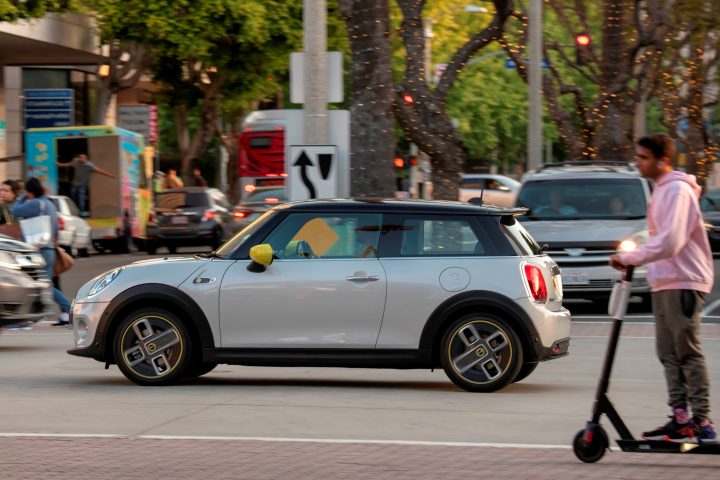 The bodyshell has two passenger doors, four sculptured seats, a tailgate which gives access to the boot/load area of 211-litres with the seats up or 731-litres with the rear seat backs folded down. The lithium-ion 33.6 kWh battery pack is T-shaped and sits in the vehicle’s floor along what would be a transmission tunnel and below the rear seats.

Having two passenger doors does severely restrict access for adults to the rear seats or for loading a child’s seat in the rear. It would be fair to suggest that as it’s a commuter car how often would the rear seats be used?  Probably not a lot but many of its competitors are five door hatchbacks.

All versions of the MINI Electric are branded Cooper S with 1, 2 and 3 specification levels. All are powered by an 184hp electric motor through the front wheels with 270Nm of torque via an auto style transmission with Drive, Reverse, Neutral and Park positions. This provides a restricted top speed of 93mph but a zero to 62mph acceleration time of 7.3-seconds, more or less the same acceleration performance as a 2.0-litre turbo petrol Cooper S model. There is the choice of four driving modes; Sport, Mid, Green and Green Plus.

The car also has regenerative braking. When the driver lifts off the accelerator the car harvests energy to feed back into the battery. In the MINI Electric this harvesting is very aggressive causing the car to slow very quickly but the driver can reduce the regenerative braking effect by pressing a button next to the stop/start toggle switch. 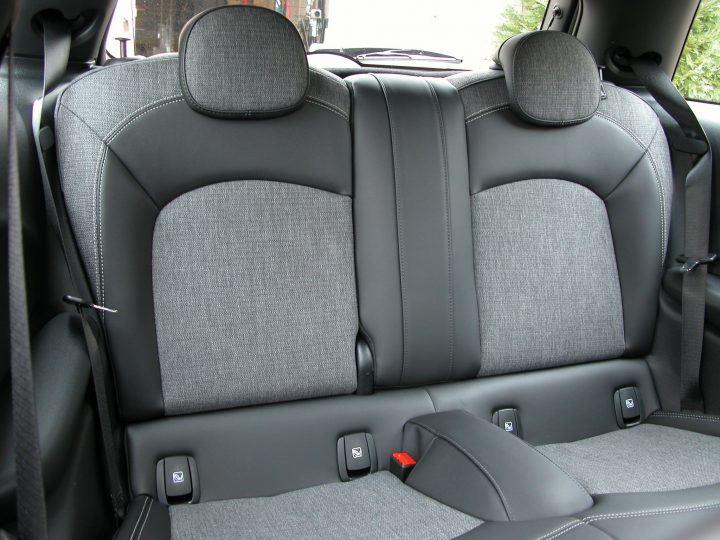 Driving on the open road is a much more controlled affair with the high torque output from standstill giving very brisk acceleration away from the traffic lights. Due to the 30mm lower ride height and resulting lower centre of gravity than a conventional Cooper S, plus the reduced weight over the front wheels with the electric motor, the MINI Electric has a very balanced 50/50 weight distribution.

The steering is ‘dart-sharp’ for the cut and thrust environment of urban driving conditions and the body control for other driving conditions is precise. However the ride tends to be on the firm side not helped by poor in-town battered road surfaces. But driving is easy, just flick the start toggle to On, select Drive or Reverse, press the accelerator and off you go but probably adjusting the ‘regen’ braking to its mildest setting until the driveway has been negotiated.

When, or if, you get to out of town driving conditions the electric motor continues its generous supply of power and torque response up to legal motorway cruising speed limits but its top speed is restricted anyway. Just be warned the faster you travel the more battery power the car uses and that supply is marginal anyway for many out of town users. 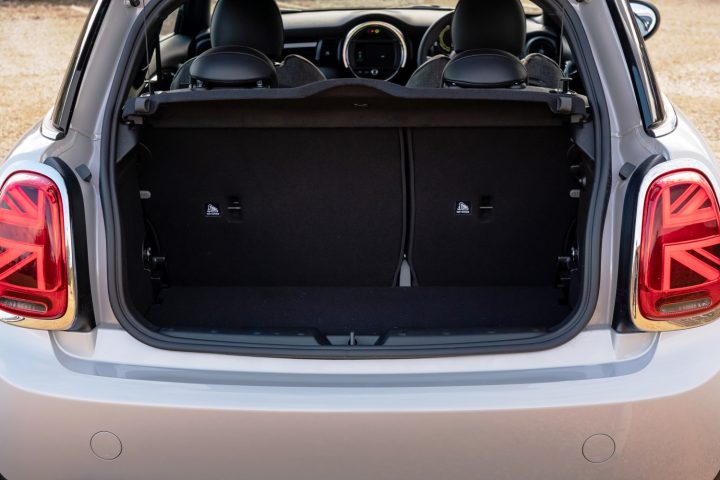 I found the MINI Electric, being a country dweller, would be potentially useful as a second car in the family.  But more than once during my week of ‘ownership’ I had to change my travel plans because the MINI Electric just wasn’t going to give me enough secure driving range mileage.

It seemed to be able to supply around 114-miles on short commuting trips between charges which for urban dwellers/commuters could be enough, but not for us country folk and the figure reduced to 103-miles between charges when longer trips were undertaken.

In all other respects the MINI Electric is a modern MINI as we know it. Even the starter-level version has sat-nav, air-con, DAB radio, electric front windows and so on. 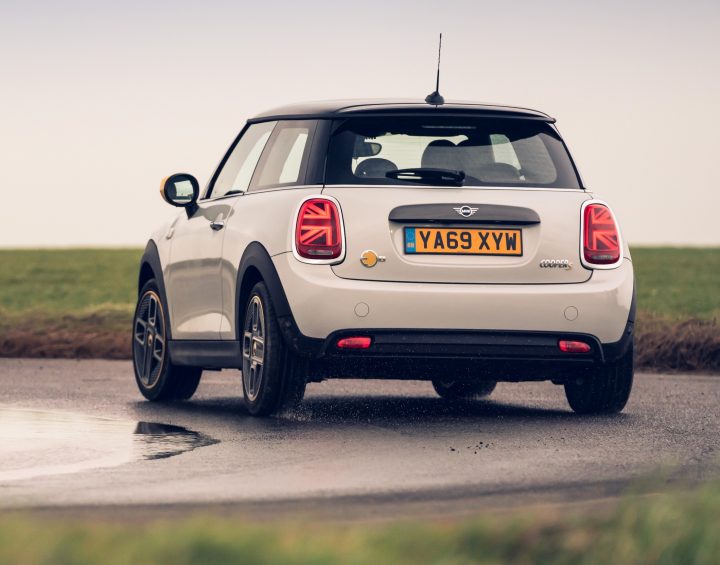 It’s high class, well built, sharp handling and a desirable brand to own if a 3-door hatchback serves your needs.

I’d be happier going the MINI route driving one of the larger PHEV plug-in hybrid models where range anxiety doesn’t exist, although of course tax and running costs are higher.