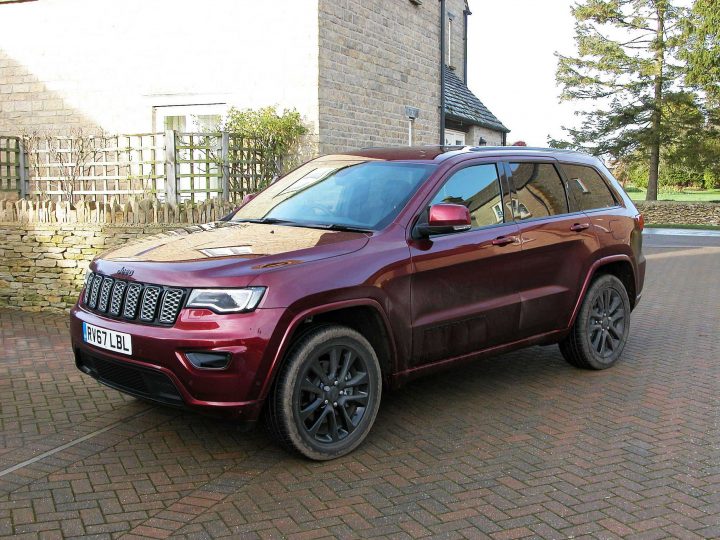 It has evolved over many years since 1993 with over five million sales, the most recent in the hands of the Fiat Chrysler Automobiles alliance.

But for deep-pocketed petrol power enthusiasts there is also just available, with very limited supply, the 180mph Trackhawk with a supercharged 6.2-litre V8 Hemi  710hp, 868Nm petrol engine priced at a huge £89,999.

So the Jeep Grand Cherokee’s story is one of evolution with numerous modifications, technical updates, improvements in quality with the embracing of up-to-date safety equipment and improvements in overall refinement along the long trail of its history.

In recent years it has moved from a body on a ladder frame chassis to a monocoque integral body and platform design, rumoured to have come from the Mercedes M-Class under the past Daimler Chrysler tie-up and now fitted with a VM Motori diesel engine adopted by the Fiat Chrysler partnership rather than a Merc unit. 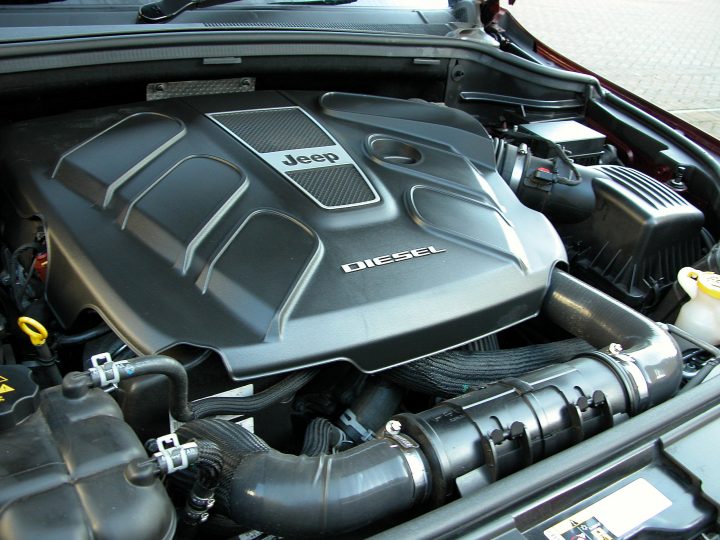 I have recently had a longer driving spell with the Night Eagle version with the core 3.0-litre V6 250hp turbodiesel engine with a significant torque output of 570Nm from just 1,800rpm matched with a new 8-speed automatic transmission and the renowned Jeep Quadra-drive 4WD Selec-Terrain Traction Control system which features five driving modes via a rotary controller from Auto through to Rock with High/Low ratio select button and Hill Descent Control.   This heavyweight version weighs in at £49,880 which looks expensive but really isn’t when you consider the price of its competitors.

The Jeep Grand Cherokee is a big, chunky and imposing large SUV but it only has five seats unlike some of its larger competitors.  But that means five big comfortable and chunky seats backed up by a large 782-litre boot and when the rear seats are folded down this goes up to 1,554-litres.

In addition this heavyweight off-roader can tow a massive 3,500kg so it’s ideal both as a workhorse towing stock trailers or promotion units or for leisure pursuits such as horse boxes, caravans and boats. 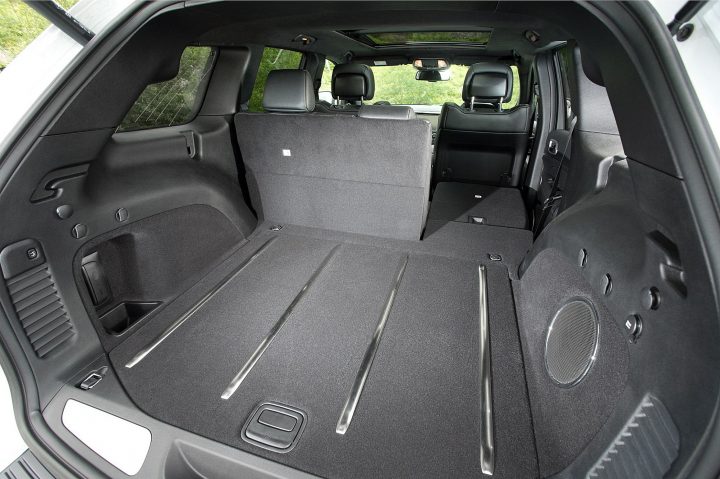 It’s a long, wide, tall and handsome looking vehicle with a length of 4,828mm, a width of 1,943mm and a height of 1,792mm and this latter figure means the ground clearance is excellent for off-road work.  The wheelbase is 2,915mm so in addition to the large boot space it provides excellent rear seat legroom. 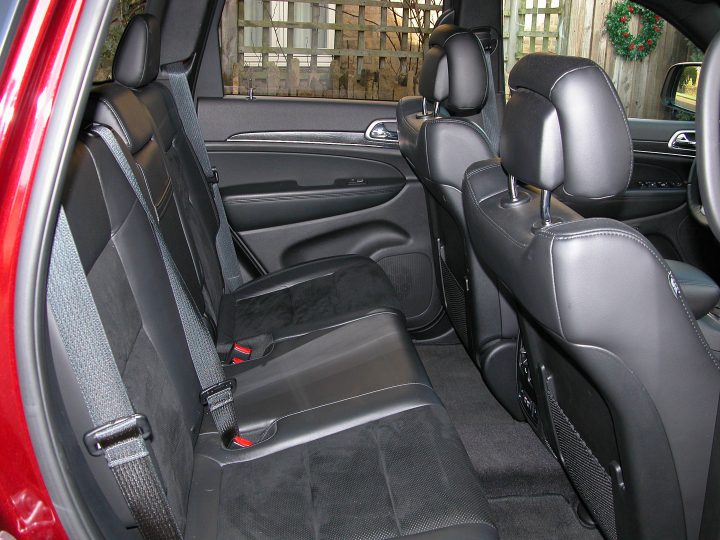 Wide opening doors give easy access but its added ground clearance can mean a bit of a step up/down is needed for those passengers with shorter legs. Even allowing for my long arms the wide opening front doors did need a bit of a ‘stretch’ to reach the armrest to pull them shut, but overall I enjoyed the roominess and interior space plus the ride comfort.

It’s somewhat of a lazy handling vehicle which given its size is no bad thing for owners.  Yes the Audis and BMWs are sharper handling large SUVs with better body control on winding country roads but personally I liked the more relaxed handling and ride comfort credentials of this Jeep. Not so good was the response from the electronic power steering which didn’t give enough feel and feedback through to the steering wheel even though it had selectable modes.  Another niggle is the lack of space in the driver’s footwell harking back to the overall design that this platform is more suited to left hand drive models than right hand drive versions and the footwell space is further restricted by the archaic foot operated parking brake. 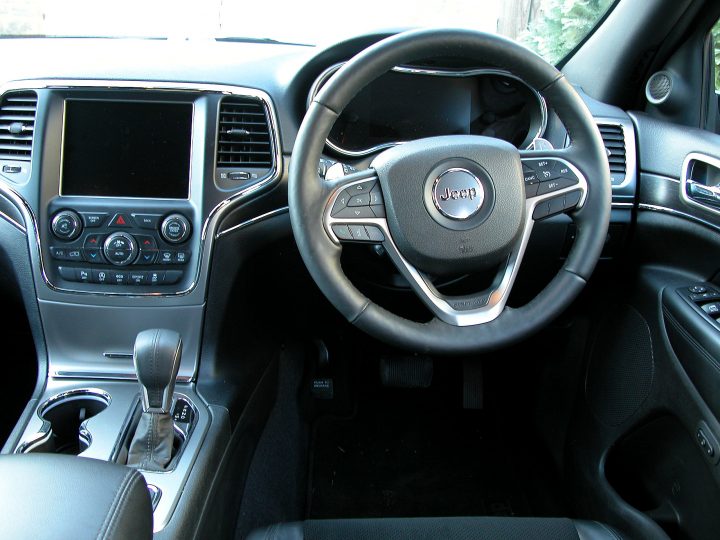 The high level dashboard further adds to the vehicles solid interior appearance and there is plenty of soft-touch chunky and well padded interior trim throughout.  The centre of the fascia panel houses an 8.4-inch Uconnect touchscreen which operates the DAB radio, sat-nav and Voice Command functions.

The heating and ventilation controls can also be operated via the touchscreen or duplicate and easier to use controls positioned in the lower section of the centre console stack. Closer to hand in the centre stack is a rotary controller to select the various driving modes from Auto through to Rock driving conditions and there are switches for High and Low ratio settings plus variable speed Descent Control. There are also Eco and Sport driving modes to select from.

Being a Jeep the specification is also comprehensive adding to its value-for-money credentials. You will pay more for German competitor models because their specifications always include extra cost options which are standard with the Grand Cherokee. 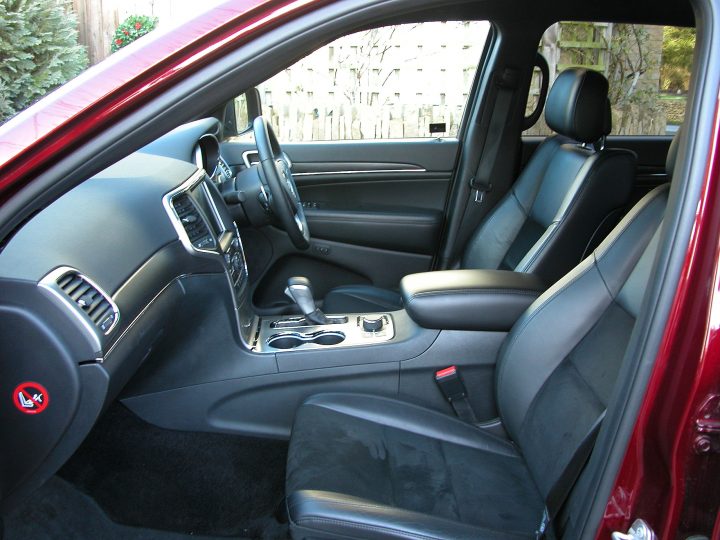 Outside the Jeep Grand Cherokee retains the styling cues we expect from the Jeep brand. These include the 7-slot iconic grille, clamshell bonnet, elongated wheelarches and its overall imposing tough stance.  The test car also had 20-inch alloy wheels, nice to look at but with low-ish profile tyres they didn’t easily absorb impacts from potholes but to be fair the ride was still more comfortable and less fidgety than most of its premium brand German competitors.

Under the ‘hood’  or bonnet as we know it, is a strong, smooth and quiet 3.0-litre V6 turbodiesel engine pushing out 250hp and most importantly to give it excellent response 570Nm of torque from 1,800rpm.  With the adoption of a new Stop/Start function and the electronic powered steering, this has reduced by14g/km the CO2 emissions which are now 184g/km.

This means that VED First Year diesel rate road tax is £1,240 before reducing to the Second Year onwards rate of £140, but remember £310 has to be added to that latter figure for five years as the vehicle costs over £40K.  Company car executives will pay the maximum 37% Benefit-in-Kind tax rate.

During my week of test driving it returned a final figure of  31.4mpg but for much of the time on longer higher speed runs the figure was 35.2mpg, it was only local in-town driving that penalised the overall figure.

The 8-speed auto box produced gearshifts in a leisurely way both up and down the ratios; it doesn’t have the sharpness in gear changing speeds that we experience with Audis or BMWs.   Although I didn’t get much time to venture off-road I have driven various generations of Grand Cherokees in past years and they are always the real-deal in that type of driving environment and I know the softer engine and gearchange responses will ideal for those conditions as well as easy to drive low speed on road, in-town driving conditions. 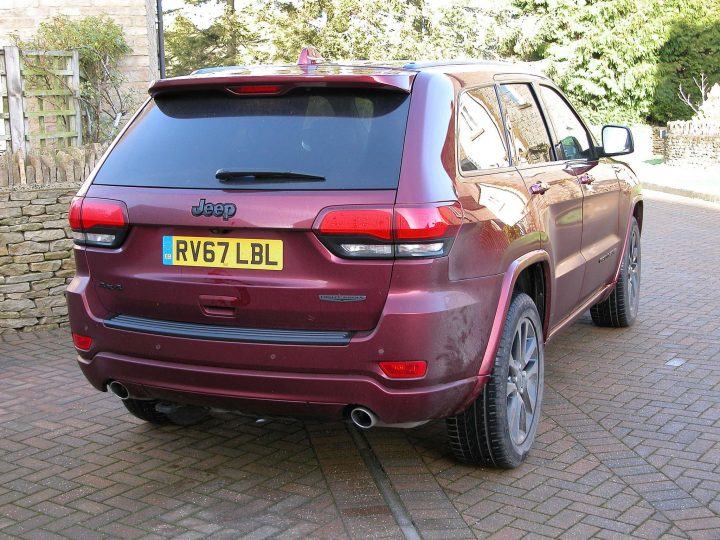 This latest Jeep Grand Cherokee is undoubtedly the best generation so far. It’s probably not the best overall heavyweight large SUV on sale today unless you want a thoroughly capable ‘real’ off-roader, rather than the more usual modern large SUVs which are geared more towards fast road use than venturing into the rough-stuff.