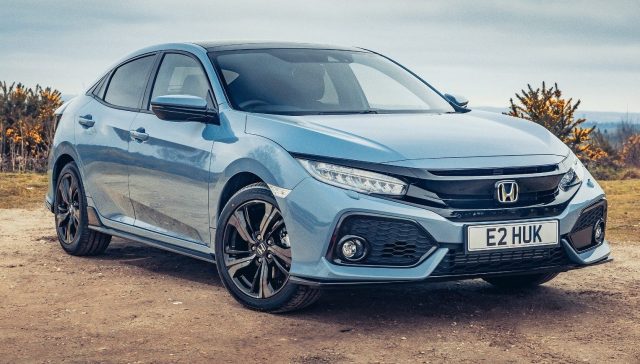 Its first car to arrive in the UK in 1973 was a Japanese built Civic 1.2-litre petrol two door saloon and last year the tenth generation Civic, a lower medium sector five door hatchback went on sale and it’s built in Britain at Swindon Plant and exported globally to over 70 different countries.

UK Civic sales are close to 20,000 units annually and the new diesel model is still expected to be the choice of 30% of UK customers although the demand for diesel powered cars has fallen by 32% so far this year due to the VW Group ‘dieselgate’ emissions issues and higher taxes.

All the spec and the new diesel engine are nicely wrapped up in the latest tenth generation Civic five door sporty styled bodyshell we now know well. It’s noticeably more athletic looking than its main competitors, the Ford Focus, Vauxhall Astra, VW Golf, Skoda Octavia and SEAT Leon, with its coupe styled side profile, long wheelbase and steeply raked forward rear tailgate with its twin glass windows. Its sporty look is highlighted by sharp styling lines, sculptured panels and a variety of aerodynamic aero fins and air vents in the front lower bumper below the Honda family face grille flanked by sleek headlights.  The body is torsionally stiffer than the last generation Civic and the adoption of a multi-link rear suspension and lower centre of gravity provide improved handling and ride compliancy. 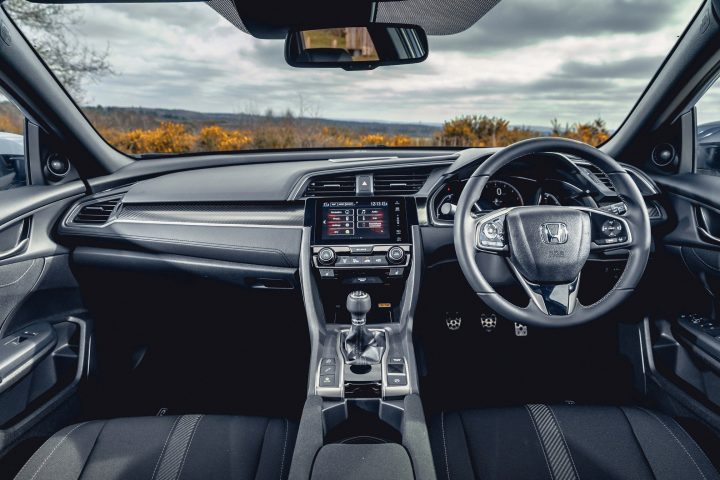 Inside the sports theme, even for the diesel model, continues. It’s well laid out and looks well constructed although the mix of smooth, textured and shiny vinyl trim look durable rather than up-market quality. 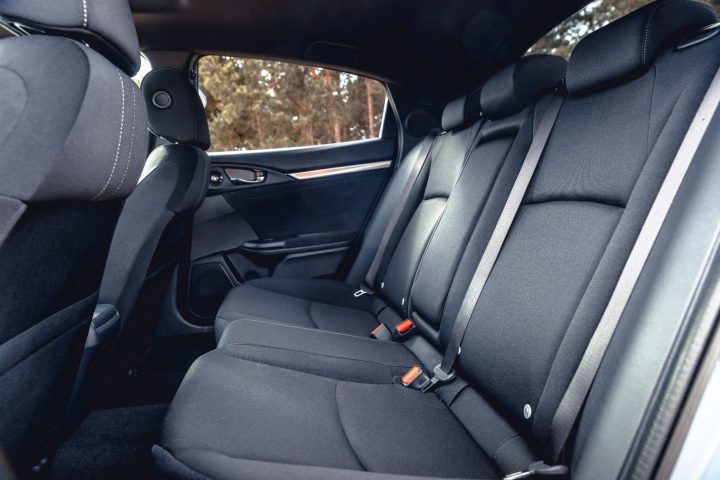 Like other Civics the diesel beat most of the competition, except the Skoda Octavia, for rear seat space and legroom thanks to its longer wheelbase. At the rear is a 550-litre boot but fold down the rear seat backs and this goes up to a very useful 1,267-litres. 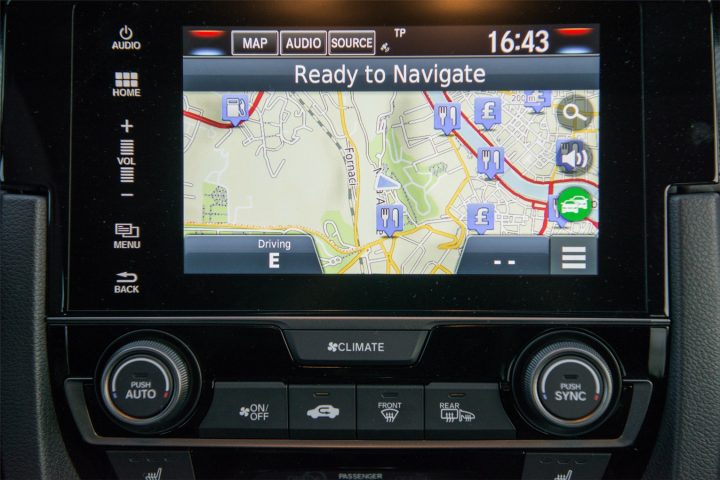 But definitely not better than the competition is the relatively small 7-inch centrally positioned touchscreen.  It’s fiddly and slow to use and not up to the standard of the latest infotainment systems.  Thankfully the temperature controls are separate from the touchscreen. In addition to an Econ button to maximise fuel economy, the EX version has an Active Damper System which adjusts the ride quality but with the vehicles modest performance its best left in its softest setting and in reality there isn’t much to choose between the settings.

But for this Civic road test I am specifically reporting on the suitability and performance of the new (revised) turbodiesel engine.  This unit, like the petrol ones and the Civic Hatchback, is built at Honda’s UK Swindon Plant.  It is an upgraded version of the previous engine. 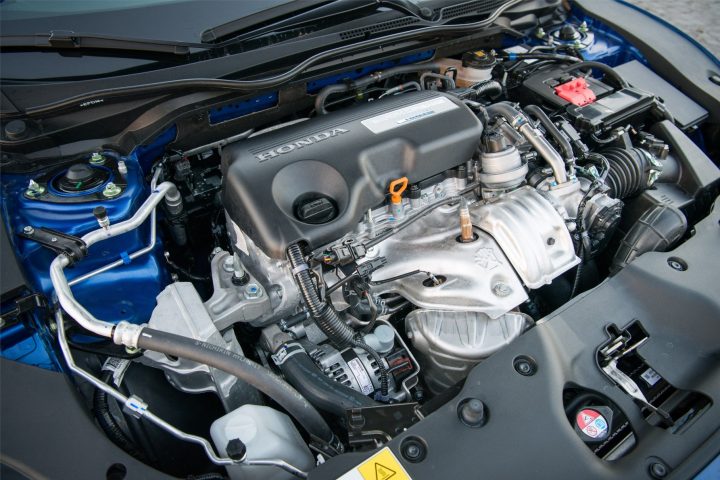 It remains an aluminium unit but it is now fitted with forged steel pistons rather than the previous alloy ones, said to improve thermal efficiency to retain heat for better fuel economy and less emissions. The injection moulded aluminium block has further strengthening struts to reduce vibrations and Honda says the frictions within the engine have been reduced.

The power output is an adequate 120hp at 4,000rpm and torque is an ample 300Nm but only at 2,000rpm and the engine revs are red-lined at 4,500rpm so it is a relatively low revving unit with quite a narrow powerband. Full use has to be made of the nice and slick six speed manual gearbox to keep the unit in its optimum torque delivery band with the fourth to six gears tending towards long-legged ratios for optimum fuel economy and reduced noise levels.  On start up the engine is slightly noisy but once cruising along it was significantly more hushed and smooth.  Top speed is 125mph and zero to 62mph takes 10.2-seconds for the EX version.

But it’s the official fuel economy and CO2 figures which are far more impressive. The Combined Cycle figure is a potentially outstanding 80.7mpg with CO2 emissions of only 93g/km and that official figure is this engine’s strong point.  It means under the new VED road tax diesel rate First Year tax costs £145 before reverting to the Standard rate of £140.  Company car drivers, the likely most prominent users of the diesel Civic, will pay 24% Benefit-in-Kind tax  under the new rates which add 4% for diesel powered cars over petrol ones.  As for my real-life test driving fuel economy, the best figure was 62.2mpg during a long run using motorways and some leisurely 50mph speed restricted country roads. Add in some local commuter trips and the average for the week was 58.2mpg, way short of the official Combined Cycle figure. 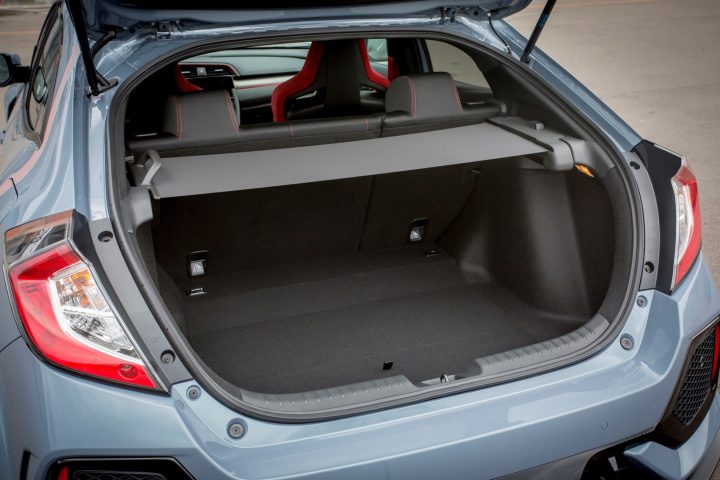 Probably the strongest competitor the Civic diesel has in its mid-sized hatchback family car sector, is from its own petrol powered 1.0-litre, 129hp engine, the model is cheaper to buy by around £1,300, the performance is better, the real-life fuel economy will only be slightly worse and the taxes are similar. At least customers have the choice of a diesel engine now.