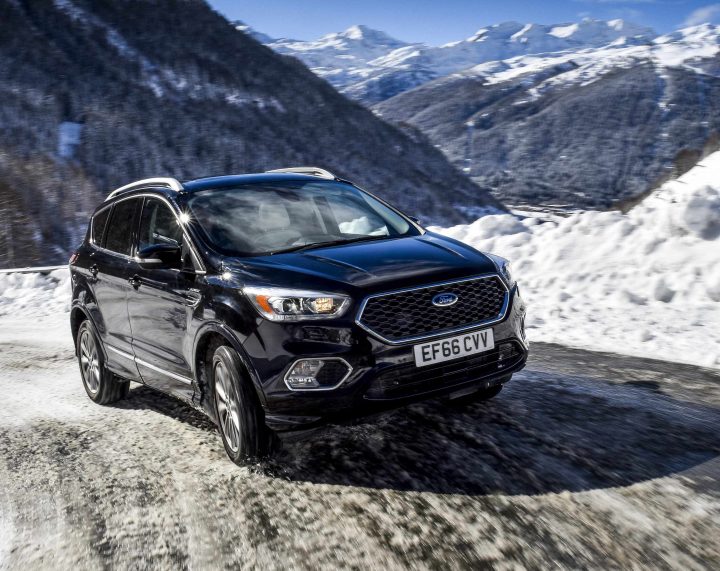 It remained in 2019 the second best selling SUV of any size just behind the British built Nissan Qashqai and ahead of the South Korean Kia brand’s Sportage.

In the Spring of this New Year the all-new third generation Kuga is due in the UK although order books are already open. This new generation Kuga will not only be available with 1.5-litre petrol and 1.5/2.0-litre diesel engine options but also with a trio of hybrid powertrain options. These will be Mild Hybrid which uses a starter/generator motor, Regular Hybrid which allows for a short electric power only driving range and a PHEV plug-in hybrid with a 31-mile electric only driving range before the 2.5-litre petrol engine chimes into life. Prices range from £23,995 up to £37,796. The Spec levels, depending on the choice of engine, manual or auto gearboxes and 2WD or 4WD will be Zetec, Titanium, ST-Line, ST-Line X and Vignale.

But for the here and now I’m having a final drive with the outgoing Ford Kuga, why? Because of its strong 2019 sales performance, its popularity and because with a new range on its way, maybe there are discounted prices available as dealer’s clear their stocks. Also for customers wanting a ‘used’ Kuga there will be plenty of them available once the new models arrive and customer’s part-exchange their second generation models. The current Kuga range prices vary between £23,375 up to £37,200 so as you can see the soon to arrive new Kuga, even with usual petrol/diesel engines and various new hybrid powertains, are only marginally more expensive than the outgoing models. 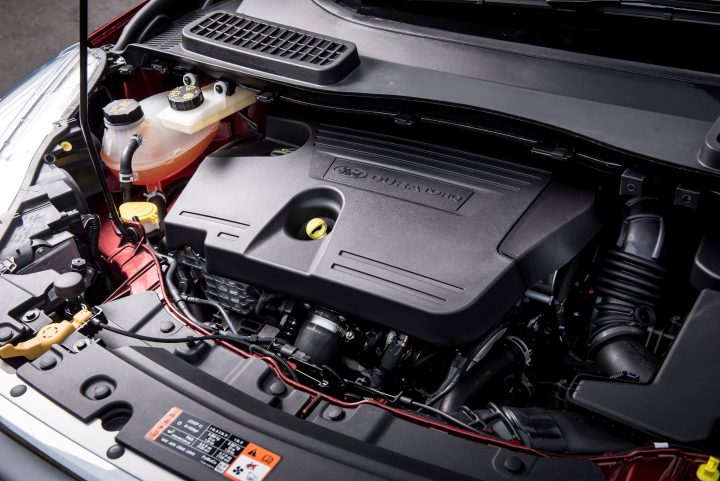 My exact second generation Kuga test drive model was the top of the range Vignale spec version with a 2.0-litre TDCi 180hp/400Nm turbodiesel engine, 6-speed Powershift automatic gearbox with Intelligent 4WD. The price is £37,200 but numerous extra cost options pushed it up to £39,220.

Some of those extras included 19-inch alloy wheels at £550, power operated panoramic sunroof at £995, heated steering wheel (lovely) at £125 and Active City Stop at £200 which in my opinion should be standard fit as it is now with many other higher spec competitor models.

The only real telltale exterior styling cues about the Vignale spec is the exclusive to this spec level hexagonal style mesh front grille, discreet Vignale badging and it also has unique design alloy wheels and some extra brightwork body trim. But it’s the interior’s plush-ness that sets this Kuga apart from the many other versions; Ford maybe a manufacturer of mainstream models but it can also supply upmarket versions as well.  The Kuga Vignale brings premium car feel and looks to what is another mid-sized family SUV and there are plenty of those to choose from including the Nissan Qashqai, Kia Sportage, Peugeot 3008, Skoda Karoq, Seat Ateca, Volkswagen Tiguan, Mazda CX-30, the Volvo XC40 and even the Range Rover Evoque is of comparable price to the Vignale spec Kuga.

Styling wise the first generation Ford Kuga launched in 2008 set the trend for mid-sized family SUVs and that progressed and evolved through to the second generation versions. It’s a style copied by most other manufacturers with its slightly rising waistline, five doors, a tall tailgate, bold front end styling, well-balanced proportions and the new Kuga follows a similar path. 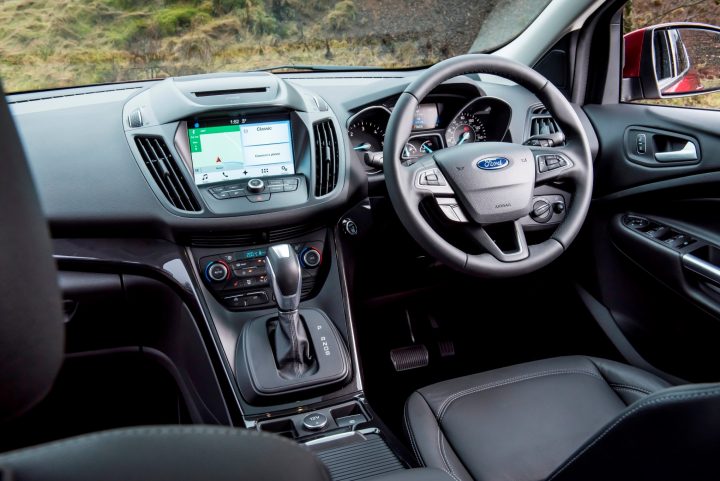 It is relatively roomy inside with good front cabin space, family-friendly rear seat legroom thanks to the long 2,690mm wheelbase. There is a 406-litres boot which expands to a very usable 1,603-litres with the rear seat back folded down. For good measure this version of the Kuga has a braked towing weight limit of 2,100kgs.

The vehicle’s tall for its class with a height of 1,749m which gives good headroom and visibility for passengers. 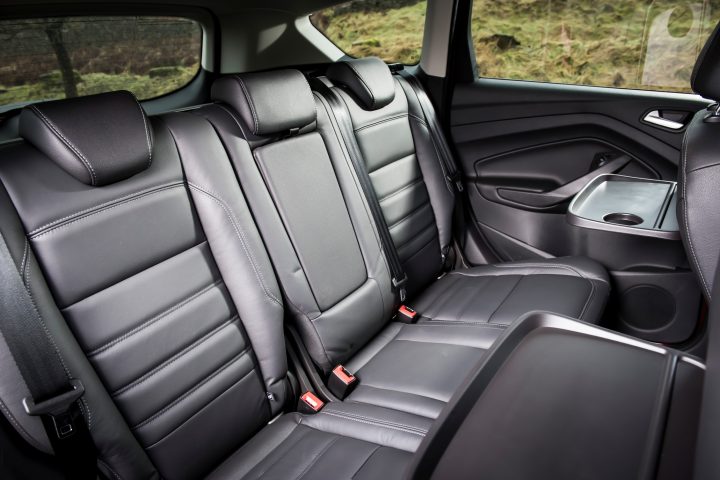 The front cabin is really well laid out with all controls coming nicely to hand and there are separate heating, air-con and ventilation controls not lost within the touchscreen system. Generally visibility is good but the view is limited at the rear quarters hence my earlier comments about it not having dipping door mirrors for reversing.

There was no Blind Sport Monitoring function that I could find and that is most useful for safer motorway driving. 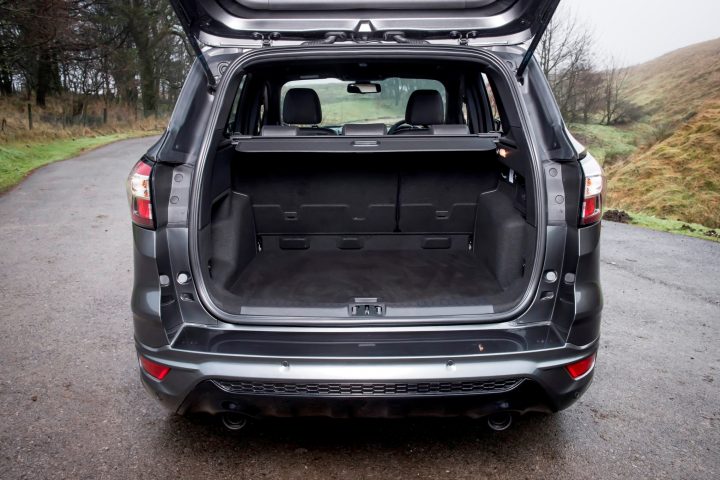 The Kuga is a good example of what Ford does really well.

Sharp well balanced surefooted handing with a compliant and comfortable ride, despite the fitment of larger 19-inch optional alloy wheels fitted to my test vehicle.

The All Wheel Drive system provided really good traction during start-off on wet and slippery surfaces as well as feeling surefooted during fast cornering on wet road surfaces.

The 2.0-litre, 4-cylinder TDCi turbodiesel engine we know as a strong performer even when coupled to the 6-speed auto gearbox and the 4WD system. With 180hp and 400Nm of torque from 2,000rpm  there is plenty of ‘grunt’ and engine response from low to high speed motoring conditions. The gearchanges from the 6-speed auto transmission were smooth and the ratios well spaced to make the best use of the high torque output. Top speed is 124mph and the zero top 62mph acceleration time is good at only 10.0-seconds.

Perhaps not as good, until you realise the model had an automatic gearbox and 4WD, is the fuel economy. The official new WLTP Combined Cycle is 36.7 to 38.7mpg which doesn’t seem that good but in reality it is given the vehicle’s performance and size. During my extended driving period over the two weeks seasonal holiday period the overall figure was 37.1mpg which I thought realistic. 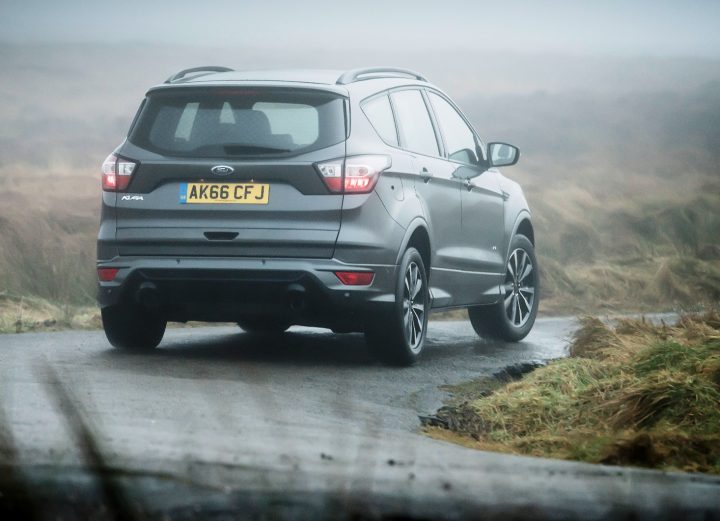 However the CO2 emissions are a relatively high 161g/km which means First Year diesel rate road tax costs £855  before the £145 Standard rate is applied for year two onwards. Company car drivers get stung for the maximum 37% Benefit-in-Kind tax levy because of the high CO2 figure.

There’s all-new Kuga family on its way but the current range still has plenty to offer proven by its continued high UK sales demand for new and used models.

Against: High tax costs, a new generation range is on its way, no Blind Spot Monitoring function I could find or dipping door mounted rear mirrors during reversing, some rear quarter visibility issues, ungenerous warranty.