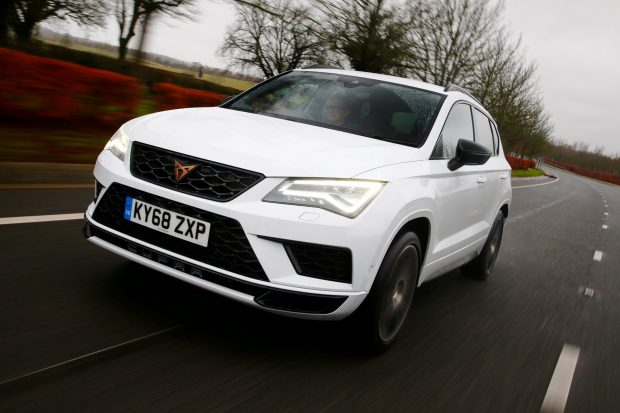 You’ve heard the name Cupra before, it’s been used and still will be for the name of SEAT’s most potent sports models, but this time its reborn, writes David Miles.

The first Cupra was developed by SEAT Sport and launched as the Ibiza Cupra in 1996 but now Cupra is being launched as a standalone sports brand and its first offering is the 153mph Cupra Ateca sports SUV.

In the future Cupra models will still appear in the SEAT range and Cupra the brand will utilise SEAT production models for future products and they have the intention to produce bespoke standalone models as well.

Brave stuff in a declining global car market to be going ‘standalone’ but of course Cupra the brand is under the umbrella of parent company SEAT which itself is the Spanish arm in the huge Volkswagen Group of multiple brands – there’s strength in numbers.

The new Cupra Ateca is a mid-sized sports SUV, five doors, five seats and all very conventional in a very crowded market sector which includes SEAT’s own Ateca models with a wide range of engine and transmission options at far more affordable prices from around £22k but still reaching £34k.

The Cupra Ateca prices start at £35,915 and rise to £41,190 through four spec levels, Ateca, Ateca Comfort & Sound, Ateca Design and Ateca Comfort & Sound Design. There is the usual list of extra cost options ranging from an £115 space saver spare wheel to Cupra bucket seats at £1,600.

With many new car customers using a PCP finance package to get into a new car the Cupra Ateca figures start from £369 a month over a 47-month period after an initial deposit of £4,699. But the optional final payment to actually own the vehicle is £15,919. 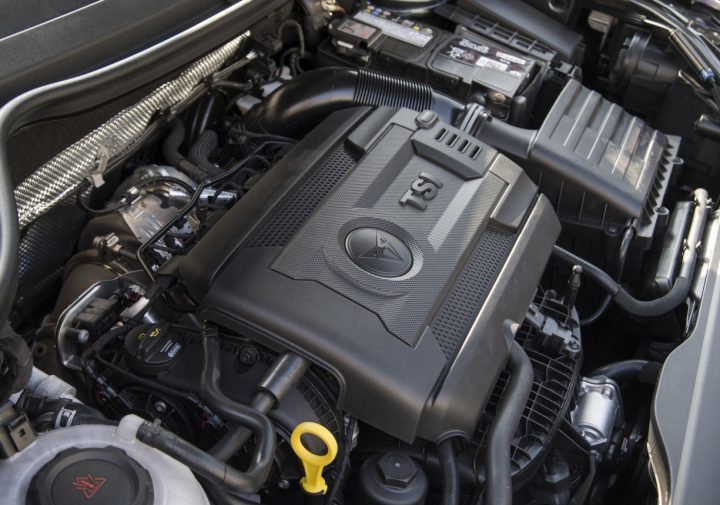 One thing these four derivatives have in common is the powertrain. From the VW Group’s extensive component array comes a 2.0-litre, 4-cylinder TSI turbo petrol engine with 300hp and 400Nm of torque from 2,000rpm. All versions have a 7-speed DSG twin clutch automatic transmission with 4Drive all wheel drive.

The new Audi SQ2 SUV uses the same components and is £2k more expensive, a shade smaller in size but with a plusher interior and with a proven premium brand sports heritage.

The WLTP Combined Cycle fuel economy figure is 34.0mpg and on our week of test driving covering the usual congested travel conditions with some passages of quieter motorway cruising the real-life figure was 31.8mpg although one longer run returned 36.3mpg.

The rather worrying figure shown up by the car’s computer was the overall average speed for my week of congested road travel was a pitiful 40mph – so much for the Cupra’s 153mph.

Sports SUVs are of course not new, they started with the large executive 4x4s with Range Rover, Audi, BMW and Mercedes. Since then the likes of Aston Martin, Jaguar and Porsche have joined in and sports SUVs have been introduced further down the pecking order as alternatives to hot hatchbacks and performance estates such as the very good Skoda Octavia vRS estate. The Cupra Ateca is perhaps an alternative to a hot family hatchback such as the Honda Civic Type R, VW Golf GTi or Renault Megane RS. 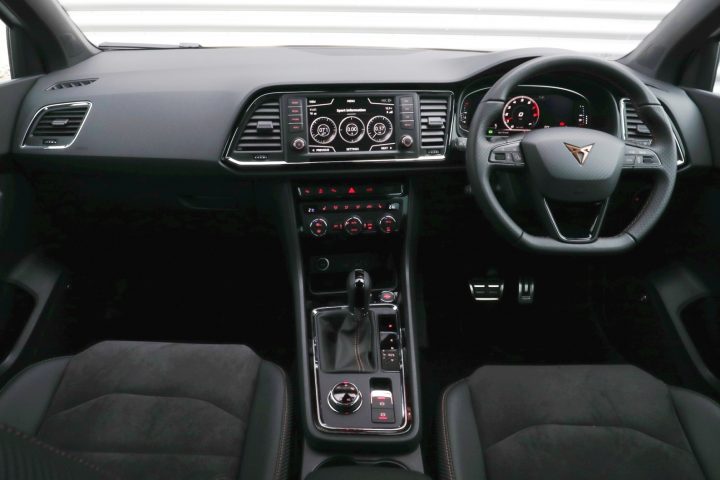 Whether we actually need high performance 150mph+ SUVs of any size is very debatable but freedom of choice matters.  If it matters to you then the Cupra Ateca’s eager performance will stir your driving senses but unfortunately despite its two twin exhaust outlets there is no theatre of sound as it moves off even under hard acceleration.

There is little induction roar from the engine either, some might call that lack of audio performance refined, I call it dull given its sports pedigree.  The engine cannot be faulted for its responsiveness, its acceleration is immediate and the high torque makes it very responsive with a linear power delivery through the wide powerband range from 2,000 to 5,200rpm.

With such a wide spread of torque it works very harmoniously with the 7-speed DSG gearbox providing fast and smooth gearshifts .The gearbox can be left in full auto or used via the gearshift paddles or  sequential shift gear lever. There are of course various driving modes, Comfort, Sport, Cupra (track day), Individual, Offroad and Snow all selected by operating the rotary dial mounted by the gearshift lever.

The 4Drive on demand all wheel drive system with the Dynamic Chassis Control function shuffles traction as needed; rearward for acceleration, front wheels for low/normal speed travel and any of the four wheels for cornering, correcting under and oversteer.

The Offroad mode function gives added traction but it’s not aimed at serious ‘mud-plugging’ conditions. With its standard fit 19-inch wheels, low profile tyres and Cupra Sport suspension the ride is definitely on the very firm side even for the most comfortable setting. 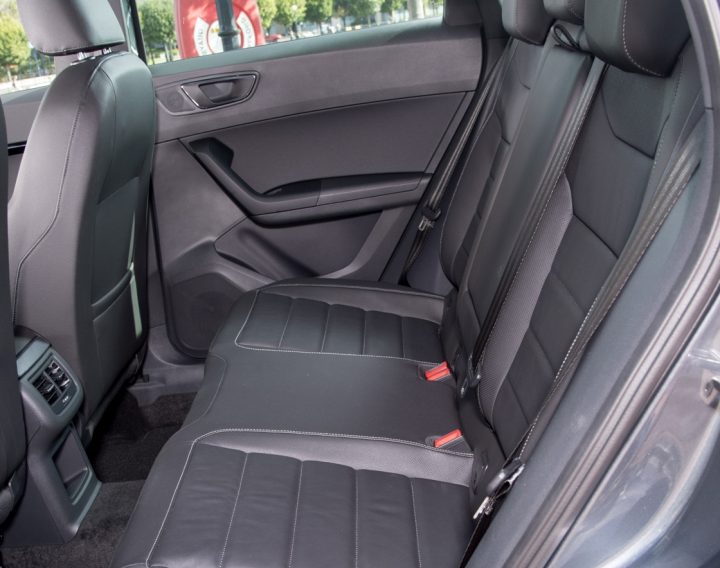 Impacts speedily find their way into the cabin, the system patters over rippled tarmac and road noise intrusion is high, but what else do you expect from an SUV parading itself as a sports machine? The plus side is the suspension keeps the Cupra Ateca firmly nailed down during fast cornering and there was no hint of brake-fade after successive hard test conditions. Overall it is well balanced and b….y fast.

Safety features for its EU NCAP 5-star rating are very comprehensive and include Front Assist, City Emergency Braking and Pedestrian protection. The standard spec also includes a full set of airbags, auto lights and wipers, cruise control, LED daytime running lights and LED front headlights and rear lights. Also fitted as standard is a Digital cockpit, 8.0-inch touchscreen, sat-nav,  full smartphone integration with MirrorLink, Apple CarPlay and Google Android Auto, air-con, keyless entry with push button start, rear view and top view cameras and the Self Parking function.  Given the premium price of even this standard spec model power adjustable and heated front seats are not included so you need to go up a grade to get those and the electrically operated tailgate and Adaptive Cruise Control functions.  I’m not convinced the Cupra Atec, which is going to be a very niche vehicle, actually needs four levels of specification, just one  well specced version sub £40k for company car tax reasons would suffice.

Interior  styling is little different to a normal high spec SEAT Ateca model although the sports seats and bronze Cupra badge in the centre of the steering wheel point to this model being a little different.  The interior trim has some areas of soft-feel materials but equally there are areas of hard plastic finishes just as with the SEAT versions. 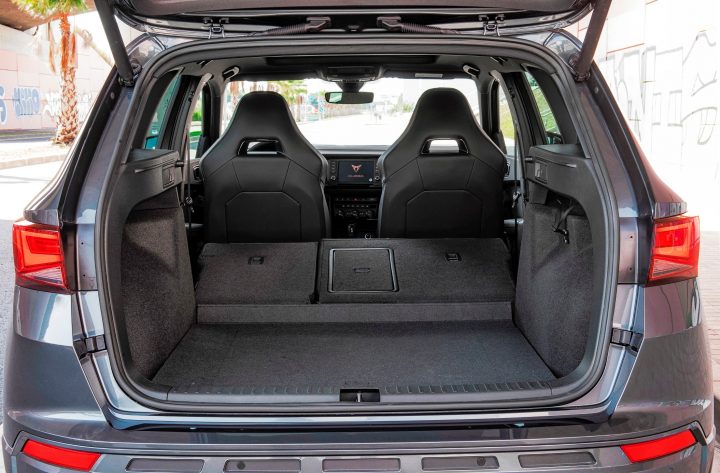 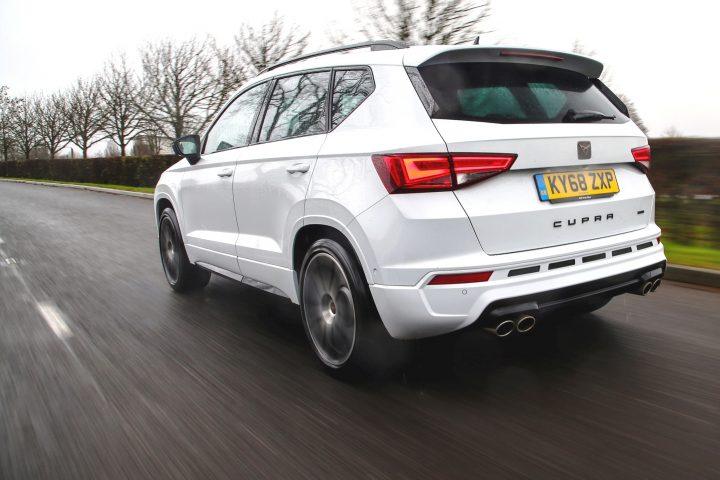 Exterior styling wise also the Cupra Ateca differs little from the SEAT versions. Most notable are the large wheels, a conservatively styled sports bodykit with rear diffuser, two twin exhaust tailpipes and at the front a sports style grille, again with a bronze coloured Cupra badge and the name Cupra included in the lower section of the grille. It’s definitely not over-stated as a sports machine so kerb-appeal might not be its biggest lure to attract UK buyers to this very new and niche sports SUV.

Against: Lacks a sports vehicle exhaust note, conservative interior and exterior sports styling, differs little visually from SEAT Ateca top spec models, expensive in its SUV sector but cheaper than an Audi SQ2 which uses the same engine/drivetrain and most other components, ungenerous VW Group warranty.