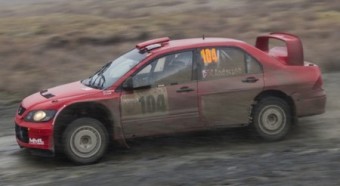 When Jamie learnt that the rally testing facility wasn’t available because it was being used as a stage on the Viking Motorsport/Links Electrical Mid Wales Stage he immediately put in an entry for him and co-driver, from Ludlow, in their Mitsubishi Evo World Rally Car.

They were outpaced on the opening stage of the four stage event by round 1 winners Hugh Hunter from Ruthin and Andy Marchbank of Little Sutton but while they struggled all day with handling problems on their Subaru Impreza World Rally Car, Anderson snatched the lead on the second stage and consolidated it with a stunning run through stage 3, the longest of the rally, defying the treacherous conditions created by heavy rain and snow throughout much of the event.

While Hunter and Marchbank hung on to take second place and retain their championship lead, third place went to reigning champion Alex Allingham from Northwich, co-driven by Caerphilly’s Alun Cook to open their championship account after retiring from the first round with electrical problems.

This time it was the turn of Luke Francis to hit electrical problems. The Rhuddlan driver and co-driver John H Roberts, from Colwyn Bay, were making their first appearance in this year’s championship but their Mitsubishi Evo IX was side-lined before the end of the first stage.

Fourth place for Worcester duo Paul Davy and Roger Allen was enough for them to secure back to back wins in Group N, for less modified cars, in their Subaru Impreza while Haverfordwest’s Roland Llewellin and Jamie Edwards of Wrexham bounced back from their opening round retirement to take second.

Seventh place went to Newtown’s Dan Humphries on his local event with Steve McPhee alongside him in the Mitsubishi Evo IX while Ilminster duo Martyn and Dawn England were 8th in their Evo X.

Two wheel drive honours went to Jamie Jukes of Llandysul and Dave Williams from Llanferres in their Suzuki Swift while Llanwrda youngster Meirion Evans and co-driver Jonathan Jackson of Warwick survived a major scare in Sweet Lamb to take second.

With top junior driver from round one, Jason Morgan of Cinderford and Conwy’s Dan Nieroda putting their Mitsubishi Evo VI a long way off the road and into retirement, that also made Evans the leading driver in the under 25 category.

Paul Davy now takes the lead in the RAVENOL Welsh Challenge, one point clear of Hugh Hunter while Jamie Jukes is a further point back as they battle it out for the prize fund worth £3000.

Championship contenders head to Dolgellau next for round 3 of the championship, Rally North Wales on 28 March. You can find out more about the event on their web site, rallynorthwales.co.uk and about the Championship on www.wnrc.wamc.org.uk, on the Championship Facebook page and on Twitter @WnRC.