As Audi so aptly puts it their new Q3 Sportback is a different slant on their Q3 SUV, writes David Miles.

It’s a variation on the Q3 theme, familiar versatility but now with a racier coupe inspired side profile and rear end styling themes.

But will this edgier dynamic design give Audi a sales edge in the over supplied medium sized SUV/Crossover market sector where numerous brands have stepped outside the usual chunky SUV styling theme to impart more stylish looks?  Audi have already used the Sportback name for some time for their A1/A3 Sportback hatchbacks and also their larger A5/A7 model ranges. Now it’s the turn of the Q3 to get the Sportback coupe treatment.

Audi like others look upon combining the sales strength of SUVs and the attraction of coupe styling to provide another string to their sales bow.  The Q3 Sportback range more or less mirrors the same engine, drivetrain and specification levels as the Q3 SUV. Prices range from £32,440 up to £61,500 for the very recently added top spec RS variant. The Q3 Sportback versions cost between £1,110 and £1,150 more than the conventional Q3 SUV variants. 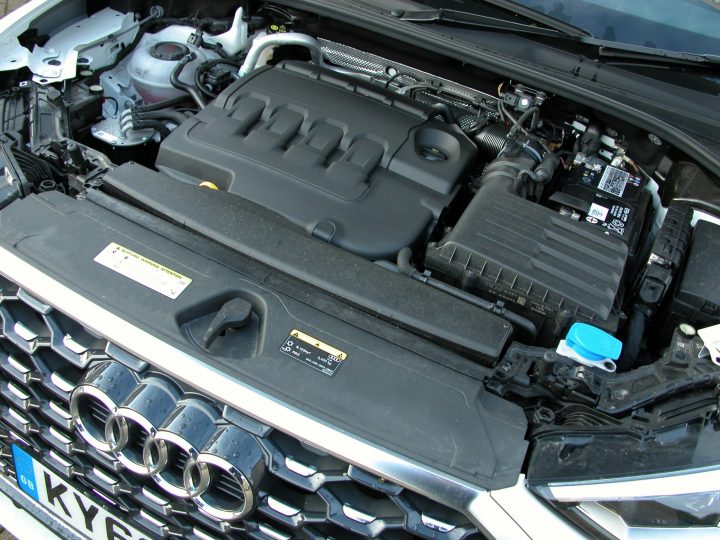 Depending on the engine there are manual and S Tronic auto gearbox options and quattro 4WD is also available for some versions. The RS versions have quattro and S Tronic as standard.

The Q3 Sportback is mostly about styling and how it differs from its chunkier Q3 SUV. In keeping with its sports styling theme at the front is a striking honeycomb grille, trapezoidal air inlets which are connected to each other by a horizontal blade in the bumper and there are slim, wedge-shaped headlights which feature LED technology in all versions.

It is the side profile of the Sportback that differentiates it from its full-fat Q3 SUV.

The side view with the coupe roofline and steeply raked forward tailgate makes it appear longer than its sister model Q3. In reality it is a difference of only 16mm but coupled with the lower roofline, shallower windows and smaller C/D pillar windows the side view gives the Sportback a more aerodynamic and agile look. At the rear a long roof edge spoiler sits above the slim tailgate window to emphasise the width and a huge lower bumper diffuser adds to the sporting image. 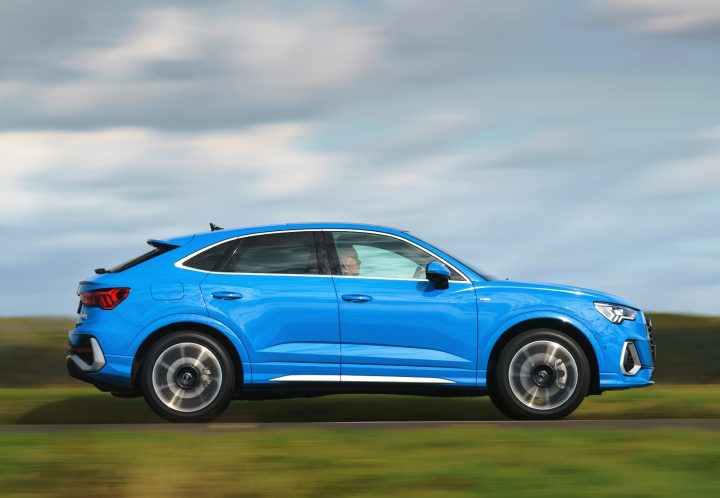 It’s 16mm longer, 49mm lower and 6mm slimmer than the Audi Q3 SUV but wheelbase is 2,680mm for both body styles so rear legroom is the same but headroom isn’t as Sportback’s sweeping roof is 49mm lower which means considerably less headroom in the rear, access through the rear door frames is much lower and that also applies to the front door frames as well.

Being a six-footer, even with the driver’s seat in its lowest height position, my head scuffed the top of the frame getting in and out of the vehicle unless I was careful. Once seated in the front the headroom was adequate.  I imagine trying to load children into child seats in the rear will be somewhat of a problem as will carrying a dog in the rear load space due to the steeply raked rear window. Probably the Sportback will be more suited to younger people without children or older empty nesters.

The rear seats can be moved 130mm fore to aft as standard with the backrests divided into three sections and their inclination can be adjusted in seven stages. The luggage compartment can accommodate 530-litres and when they are folded down up to 1,400-litres of space is available.

This is the same as the Q3 SUV despite the Sportback’s steeply raked tailgate because the load floor is a shade longer.  A power operated tailgate is standard and the load floor can be adjusted to various levels.  A combination of the steep angle of the tailgate window and tiny rear quarter windows means rear visibility is not good and with my S line test drive model I was surprised it didn’t have a rear view camera or dipping rear view door mirrors when reverse gear was engaged.

It just had a display showing predicted reversing guidelines which didn’t help when reversing into parking spaces to keep those nice 19-inch large alloy wheels away from kerb edges but it did have front and rear parking sensors.

Above S line the Edition 1 and Vorsprung models go a step further by upsizing to a 20-inch wheel and adding a black styling pack colouring elements such as the grille surround and window cappings. They also upgrade to Matrix LED lighting technology for maximum illumination through dimming of individual segments of the headlamp unit to divert the beam around leading and oncoming traffic.  The RS versions have their own high level of spec and include as standard many of the options and additional packs available for lower spec version – hence their £53,600 to £61,500 high prices. 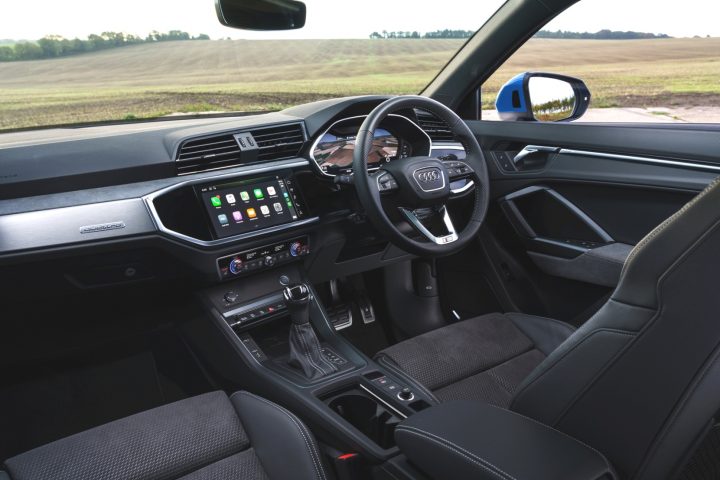 Up front in the cabin is the usual sophisticated design and layout mirroring most other Audi higher cost full size models. The focal point is a two-level instrument panel incorporating the new 10.1-inch high resolution MMI touch display giving access to the MMI navigation plus system which is standard for all UK Q3 Sportback models.

The various functions are displayed on the MMI Touch display and in the Audi virtual cockpit with its 10.25-inch screen in the instrument binnacle, which is also standard. An even more panoramic version with additional functions – the 12.3-inch Audi virtual cockpit plus – is fitted to Edition 1, Vorsprung and RS models.

Function control is possible via the central touch screen or the multi-function steering wheel and all UK Q3 models are also equipped with new natural-language voice control, which responds to enquiries not only with the benefit of information stored onboard, but also with detailed knowledge from the cloud. 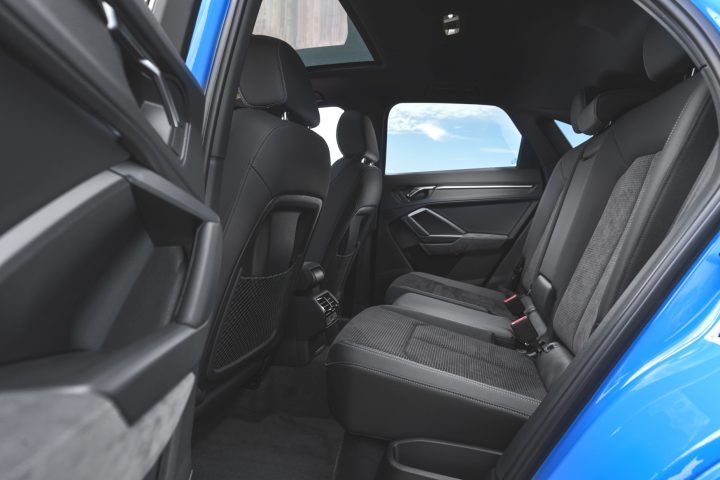 Full connectivity is available with the usual driver safety support systems and various alerts. Sport versions have cloth upholstery, S Line gets leather and cloth and full leather in higher spec models. Controls are well laid out, logical to use with separate heating and ventilation controls outside the central touchscreen which makes it user-friendly.

My exact Q3 Sportback test drive model was the likely best selling version for most business users, the 2.0-litre TDI 150hp turbodiesel with a 7-speed S tronic auto gearbox with 2WD priced at £37,420. But retail customers will probably steer clear of diesel power and opt for the new 1.5-litre TFSI, 150hp unit with its mild hybrid system and S line spec priced at £34,885.

The latest 2.0-litre TDI engine is known and popular throughout the various VW Group brands. With 150hp and 340Nm of torque from 1,750rpm it is a strong and responsive engine – but noisy under load and even at low speeds it was more audible than expected, certainly in an Audi given the brand’s supposed reputation for refinement.

Gearchanges via the 7-speed S tronic dual clutch auto gearbox were smooth enough but from the first start-up of the day the unit held onto first gear for too long before eventually slipping into second gear. Once warm it was fine. 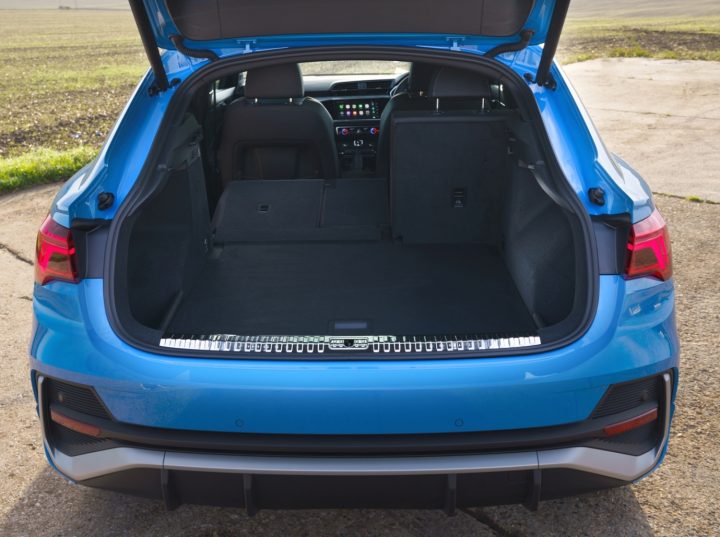 Quattro 4WD isn’t available for this engine with an auto gearbox. Petrol engines combine 4WD with manual and auto transmissions. That meant my automatic diesel test car had 2WD although there is an Off Road mode in the Drive Select system to operate and modulate the front differential and braking to maintain grip through the front wheels in adverse light off road driving conditions.

Top speed is more workmanlike than in keeping with the Q3 Sportback’s performance styling. The WLTP Combined Cycle fuel economy is 47.1mpg and my week of test driving using motorways and local in-town roads retuned 43.3mpg. My test car with loads of options actually cost £42,640 so it would pick-up that higher tax penalty. Buyers beware.

The Audi Q3 Sportback will appeal because of its coupe styling but for me it has too many compromises, notably its lack of headroom for tall people and modest headroom in the rear, plus limited height in the load area and poor rear visibility.

Definitely an exercise in styling over function so my advice is to stick with the Q3 SUV which is more practical and also cheaper.

For: For some people the aerodynamic coupe styling will add some appeal to owning a SUV, mainly well equipped, sharp handling, reasonable ride comfort

Against: Poor headroom for taller people through the door frames, very limited rear passenger headroom, poor rear and rear quarter visibility due to its steeply raked tailgate design, limited headroom in the load area, no quattro 4WD option with this mainstay engine and automatic transmission, adding too many options will push the price over £40k and will incur higher taxes, ungenerous warranty.