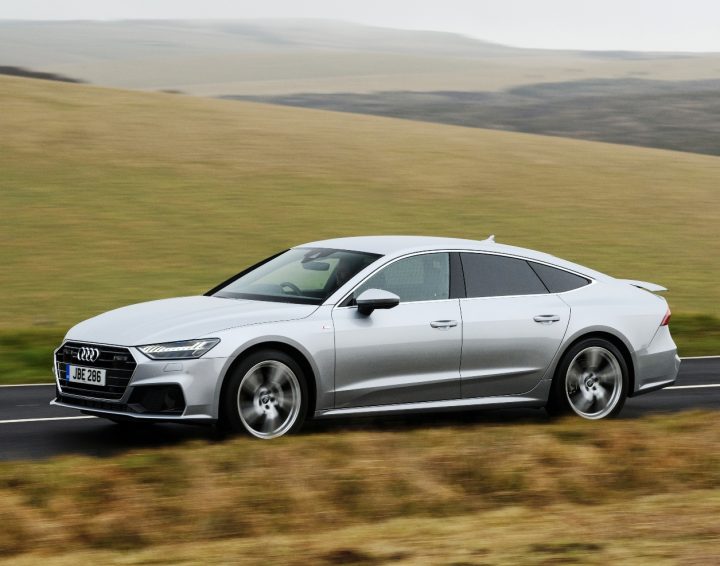 Together they create a formidable presence in the overall Audi line-up and they also have the e-tron all electric models arriving from now onwards.

Manufacturers have to meet new lower global exhaust emission targets and in the UK petrol and diesel car sales could be banned from 2032 and not 2035 as agreed. So it’s imperative that various forms of using alternative fuels such as electric and hydrogen to propel our cars are introduced sooner rather than later.

Currently the alternative fuel new car market offers pure electric battery models, PHEV plug-in hybrid versions, self-charging hybrids and mild hybrids. In the rather skewed registration figures until the end of May, caused by the pandemic lockdown, alternatively fuelled cars have accounted for 21% of all new cars sold in the UK. In the wider European market alternatively fuelled car sales took 15% of the new car market in May.

In the EU the hybrid/mild hybrid sector Toyota took the top three sales positions with their Corolla, C-HR and RAV4. In the plug-in sector it was the new Ford Puma in the top spot followed by the BMW X3 and VW Passat. In the pure-electric class it was the Renault Zoe followed by the VW Golf and the former long time leader – the Tesla Model 3. 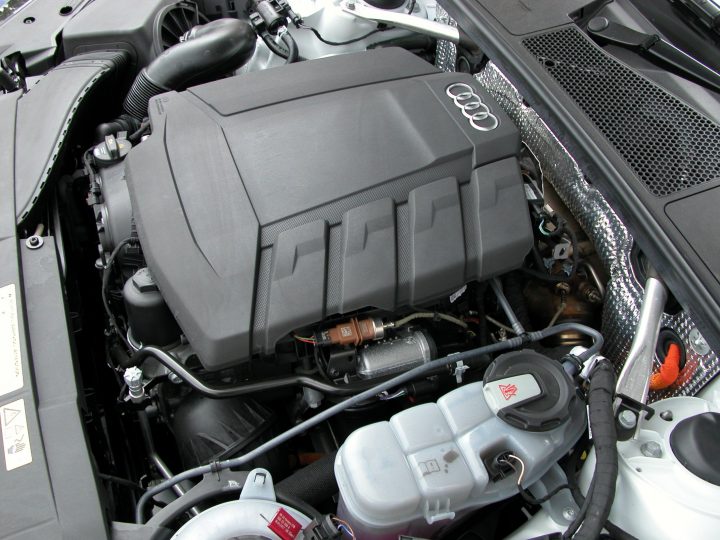 In Electric Vehicle mode, the car relies purely on electric power unless the accelerator is firmly pressed and the engine instantly fires into life. In Battery Hold charge is preserved at its existing level for those zero emission zones. Despite its clear focus on efficiency the Audi A7 Sportback 55 TFSI e quattro is no sluggish ‘flash-mobile’.

When the TFSI engine and the electric motor work in tandem the system produces 367hp and 500Nm of torque or ‘grunt’. The latter is available from just 1,250rpm.

Power is transferred to the road through a smooth-changing, double-clutch seven-speed S tronic auto transmission and quattro all-wheel drive. The hybrid A7 is capable of sprinting from 0-62mph in just 5.7-seconds and reaches a restricted top speed of 155mph. In electric-power only mode it can travel for around 25-miles and reach speeds of up to 83.9mph. 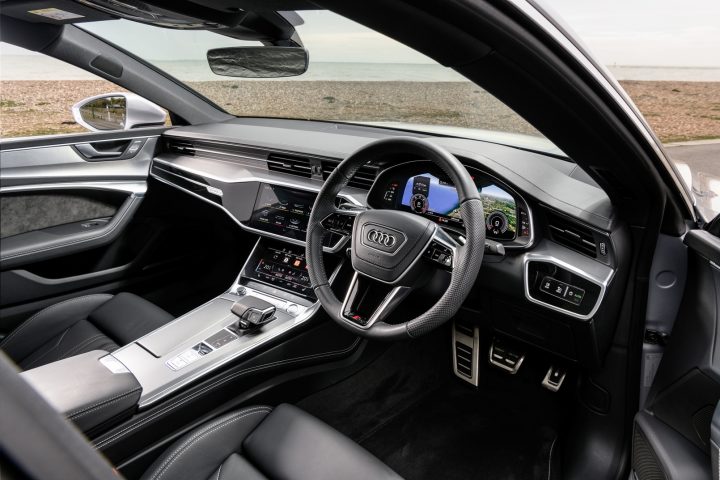 Officially the coupe will return 141.2mpg in the new WLTP Combined Cycle with CO2 emissions of 46g/km.   During my week of test driving occasionally recharging the battery and leaving the vehicle in its default Hybrid mode the figure was 63.9mpg but at times it was as low as 44mpg and as high as 132mpg.

PHEVs do not give their best fuel economy for long motorway journeys, the battery power runs out and the engine does all the work.  Commuter urban stop-start travelling is its most efficient arena and winding country roads with lots of opportunities for topping up the battery using the regenerative braking energy capture function also works well.

That all important company car Benefit-in-Kind tax rate is just 12% whilst most other petrol/diesel  A7 Sportback variants are rated at 37%.  The VED road tax First Year rate of £0 is followed by £140 Standard rate BUT as the coupe costs over £40k it incurs the dreaded £325 annual supplement for five years.  Insurance is group 49E. 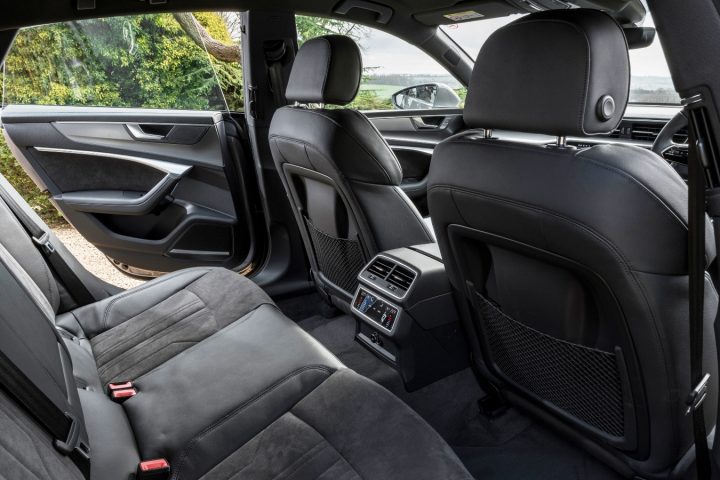 Intelligent Route Management Technology such as predictive efficiency assist and predictive operating strategy ensure optimum use of the battery’s charge. Aspects of the journey, including roundabouts, hills, speed limits and traffic ahead, are taken into account to ensure the correct driving mode for each situation.

This enables the final urban stretch of a chosen course to be driven electrically, during which the car produces no emissions. That’s the theory anyway.

All Audi TFSI e models have two ‘fuel filler’ flaps, one on each side of the car. The one on the right is for petrol while the one on the left houses the connector for the electric charging cable. Using a connection with an output of 7.4kW, such as a home wall box or a roadside charger in town the charging time takes two-and-a-half hours but much longer using a domestic 13-amp socket. Using the myAudi smartphone app drivers can check the battery and range status remotely as well as starting and monitoring the charging process.

So what’s it like to live with?  That’s down to your motoring conscience.  If you are an eco warrior or a dedicated tax saver then the new TFSI e variant is for you. If on the other hand you want your A7 to have a soul then pay the considerable extra tax costs and sit back and enjoy the thrust of a multi-cylinder large engine which still predominate in the latest range. 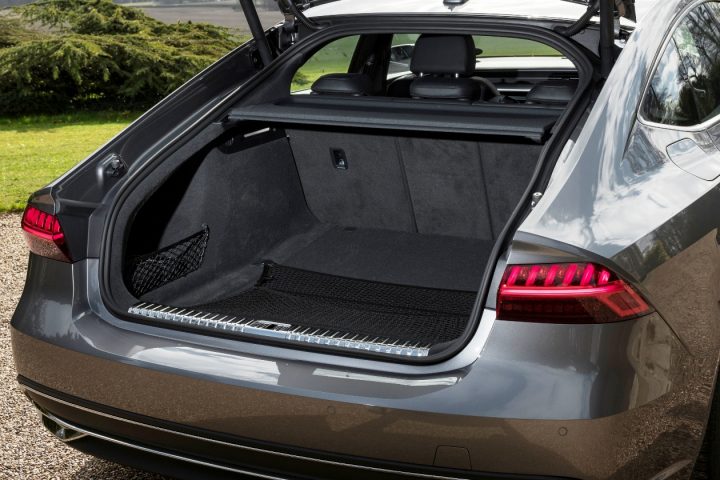 That isn’t to say the 2.0-litre, 4-cylinder engine and electric motor powertrain comes up short – it doesn’t as the figures show – but for long legged cruising on motorways and country roads it just lacks that depth of performance, that ease of high speed progress and probably most of all the theatre of sound from the exhaust system.

The A7 Sportback e variant is great for local travel using all-electric power but for it to remain efficient it must be charged from the mains more or less daily and in all honesty how many company car drivers in real-life actually do that?  They just go the PHEV route to considerably reduce their personal tax costs and in doing so actually use more petrol and increase the car’s running costs, no doubt paid for by the company.

In all other respects this 55 TFSI e quattro PHEV version of the A7 Sportback has the same rock-solid build quality and high specification throughout as other posh Audis. The iCockpit functions through to the Audi Drive Select functions are all included as is the new and really clever Intelligent Route Management Technology function which automatically controls the engine and electric motor’s optimum use during a journey. 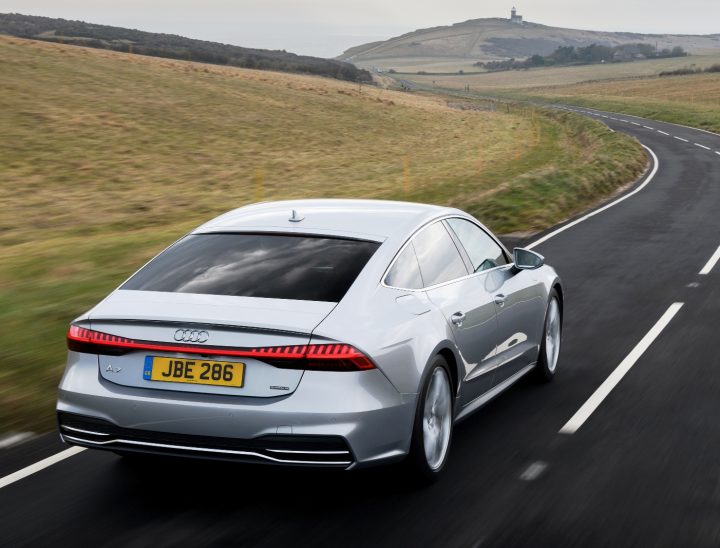 Route Management is another element of autonomous driving we will have to get used to and it didn’t appear to be intrusive on longer journeys.  I just pushed the start button, set the sat-nav destination, selected Drive and pressed the accelerator and let the technology do its own thing. It all seemed to work well enough but without providing much driving pleasure.

It felt very efficient and clinical rather than pleasurable and rewarding. Tax scrimpers might not agree though.

Against: Costly to buy/lease, clinically efficient hybrid powertrain rather than the pleasurable experience of a multi-cylinder petrol or diesel engine, ungenerous warranty.