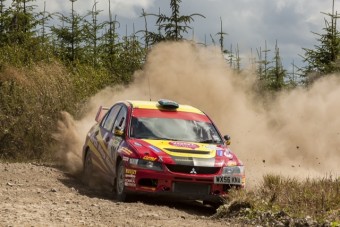 The Pirelli MSA Welsh Forest Rally Championship reaches its conclusion this saturday with the Llandudno based Cambrian Rally.

The driver’s title has already been won by North Wales born Bob Ceen and he will be looking to round off the season with a victory on home turf.

Although he now lives in Malvern, Bob was born on the Llyn peninsula and brought up in Holyhead but he has other reasons to go for the win, too.

While his title is secure, Bob’s co-driver, Andy Bull from Birmingham is still involved in a five way battle for that crown, with Llion Williams of Caernarfon and Wrexham’s Jamie Edwards, who this weekend shares the Focus World Rally Car of Brian Bell, being among the other protagonists, and Bob’s team would love nothing more to than to do the double.

Part of the team’s prize for taking the championship is a free entry on Wales Rally GB National Rally donated by IMS, the organisers of the World Rally Championship round, as part of their Road to Wales initiative. So, in addition to everything else, the Cambrian Rally offers them some ideal preparation for that event, which starts in Llandudno on 12 November.

The battle for second place in the drivers’ championship has still to be settled with just three points separating Worcester driver Paul Davy and Llanon’s Dylan Davies while Abergele driver Luke Francis will be looking for a good result after being pipped to victory on the last stage of previous round, the Woodpecker Rally, by Jamie Anderson of Leicestershire. Luke and co-driver John H Roberts from Colwyn Bay would love to take a win to round off an up and down season.

Ellesmere’s John Baker leads the two wheel drive category in his Ford Escort going in to this event but has only a narrow 10 point lead from Delamere driver Chris Nixon with Tim Cains of Bridgnorth and Corwen’s David L Roberts also in the mix.

While Morgan Handford from Pontyclun has secured the junior drivers’ title open to competitors aged 25 or under, Caron Tomlinson from Penmachno faces stiff opposition from two Ludlow based competitors, Keaton Williams and Freddy Brick, for the junior co-drivers’ crown.

Paul Davy topped the overall drivers’ title for much of the season only to lose out to Bob Ceen. He should, however, secure the Group N title, for less modified cars, this weekend with his closest rival Haverfordwest driver Roland Llewellin, missing the event due to business commitments in China.

Davy is also involved in one of the tightest fights in the championship, for the RAVENOL Welsh Challenge. In its inaugural year, the Challenge offers the winner £3000 worth of the sponsor’s high tech lubricants and other products. Davy is currently two points ahead of John Baker with Dylan Davies one point further back.

The Cambrian Rally gets underway from Llandudno Promenade at 8am on Saturday with stages in Crafnant and Penmachno forests and on the Great Orme.

You can find more spectator information on the event web site, www.cambrianrally.co.uk, and more about the championship at www.wnrc.wamc.org.uk or follow it on Facebook  and Twitter @WnRC.

This weekend’s event will inevitably be overshadowed by the recent tragic death of Championship contender Andi Mort.

Andi regularly contested Championship rounds co-driving for Tom Naughton. Series co-ordinator Dave Evison commented, “Andi was universally liked and respected by everyone involved with the Championship and our thoughts are with his family and friends, including Tom”.