You are here: Home / Features / Motorhome ideal for staycation or even mobile office

The VW marketing literature refers to it as ‘a true home from home on four wheels.’

The 2016 California is Volkswagen’s sixth generation T6 campervan, adding to the legend of what has come to represent the spirit of independence and freedom.

What began some 60 years ago as the vehicle of choice for California’s surfer brigade, it has been substantially improved over the years making VW the only manufacturer today to produce its own in-house camper van as part of its model range.

The challenge this year for the author was to cover the Le Mans 24-Hour race in France while staying on-site in the California. The journey, which started in West Wales, took in motorways as well as country roads, and throughout, the California proved as easy to drive as one’s family SUV or estate vehicle.

The California also showed itself to be an extremely convenient and easy vehicle to live with, a retreat from the persistent rain at Le Mans, and a welcome home after a long day of interviewing, photographing and writing.

Setting up station at Le Mans was a simple matter, as the pop-up roof extends in less than 30 seconds, opening up the sleeping quarters which allows one to devote the lower floor to working, eating or recreation.

The two front seats can be swivelled around to face rearwards and, with the interior folding table extended, the cabin becomes a sizeable recreational or work space.

The California can sleep up to four adults, with two sleeping comfortably ‘upstairs’ and two ‘downstairs.’ For privacy at night, all windows have either pull down blinds or cloth blinds with magnets.

The front windscreen has two very neat blinds which extend from the A-pillars on each side and are fixed in the centre, but roll away when not needed.

Located above the rear view mirror is a neat control unit where one sets the temperature for the 42-litre refrigerator which runs off the vehicle’s leisure battery.

Fitted in the main part of the cabin is the kitchen unit which consists of the refrigerator, a twin burner stove and compact wash basin fed by a 30-litre water tank and gas for the stove is supplied from a 2.8kg cylinder located in the rear of the vehicle. 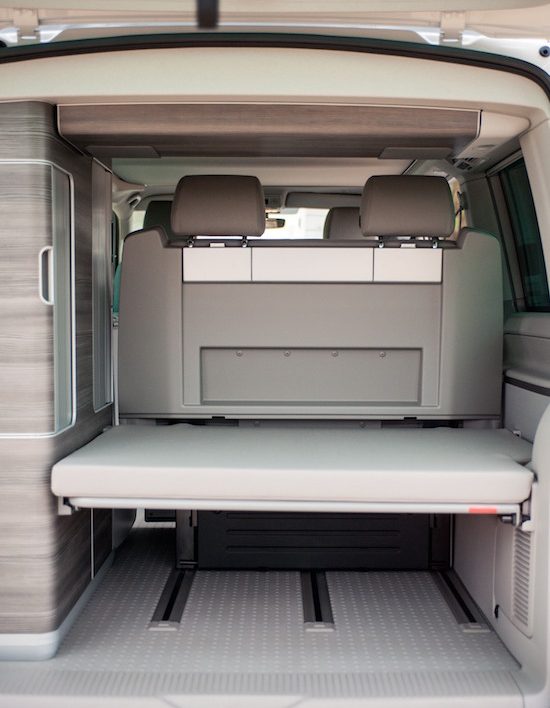 Fixed above the sliding door is an awning that stretches almost the length of the vehicle, and extends sideways offering welcome cover. Located in the sliding door is an extra folding table which can be set up outside and used together with the two folding chairs which slide neatly into slots in the rear tail gate.

Under the rear seat is a large pull-out drawer for the cable for hooking up to the mains at the campsite, vehicle levelling wedges for uneven ground, and other bulky items. There are cubby holes and storage bins galore, with a hanging cupboard in the rear of the vehicle (see image).

Introduced in the 2016 California is a new Composition Colour touch-screen DAB+ radio system as standard, while voice recognition is available as an option. App-Connect allows your smartphone screen to be shown on the radio system’s display, and external media devices, such as an MP3 player, connected via the USB port.

The Media Control allows a smartphone or tablet to be turned into a remote control to operate the audio system functions from the rear via Wi-Fi.

BlueMotion Technology comes as standard on all California engines, and consists of three key elements: Start/Stop – this automatically turns the engine off when the driver stops and engages neutral, the engine starting up again as the vehicle begins to move.

Low rolling resistance tyres –because the friction between the tyre and the road is reduced, the engine has to work less. Regenerative braking – when the driver brakes, the energy recuperation system uses momentum to turn the alternator and charge the battery, thereby making the most of the energy when you brake.

In summary, the California Ocean proved an enjoyable, comfortable and convenient camper van, with solid build, innovative features and good mechanicals. It is an excellent vehicle for those weekend getaways at a price but even that will not include your own surfboard.

For: Convenient all-in-one travel and camping vehicle, well thought out package, easy to set up, reliability of VW powertrain for added peace of mind and drives like a car

Against: Same vehicle to be used for touring once you have arrived at destination, slightly limited camping options, additional tent required for more occupants with limited space & high price.