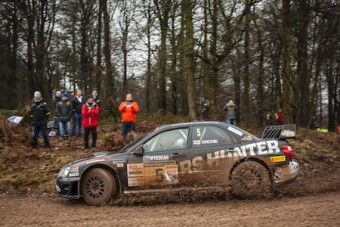 The early lead in the 2015 Pirelli MSA Welsh Forest Rally Championship went to Hugh Hunter as the Ruthin driver claimed maximum points on the opening round, the Chepstow based Wyedean Rally.

Hugh and Cheshire based co-driver Andy Marchbank reported mid event that they lacked confidence in the handling of their Subaru Impreza but were able to improve matters at the lunchtime service halt and make it to the end of the event while several of their close rivals fell by the wayside.

Among those to hit problems was reigning champion Alex Allingham. The Northwich driver, and co-driver Alun Cook from Caerphilly, were forced out after just two of the eight stages with electrical problems on their Subaru. Even that was further than the unfortunate Jim McNeil and Tony Bassett. They suffered a broken throttle cable on the opening stage. Despite an ingenious repair to their RAVENOL Rally Team Impreza involving a shoe lace they dropped too much time to continue.

Entries for the event were oversubscribed with championship registrations also up on 2014, competitors citing regular TV coverage of the series as a key attraction.

They were delighted to even be in the top 10 with this being Bob’s first outing in more than 12 months and their first rally together since the start of the 2013 season.

Meanwhile, fourth place for Jason Morgan, co-driven in his Evo VI by Conwy’s  Dan Nieroda, gives the Cinderford driver the lead in the Junior category for drivers under 25. Irishman Jordan Hone lies second in the junior category ahead of Cardiff’s Morgan Hanford.

In the newly launched RAVENOL Welsh Challenge which enables competitors in every class to share in a prize pot valued at £3000, Jason Morgan shares the lead with Thomas Lloyd of Port Talbot and Ludlow’s David Brick.

Special Stage Extra’s coverage of the event is scheduled to appear on Motors TV on 4 March.

The next round of the Pirelli MSA Welsh Forest Rally Championship is the Newtown-based Mid-Wales Stages on St David’s Day, 1 March.