You are here: Home / Featured / Ho Ho Hold up – but not by sleigh 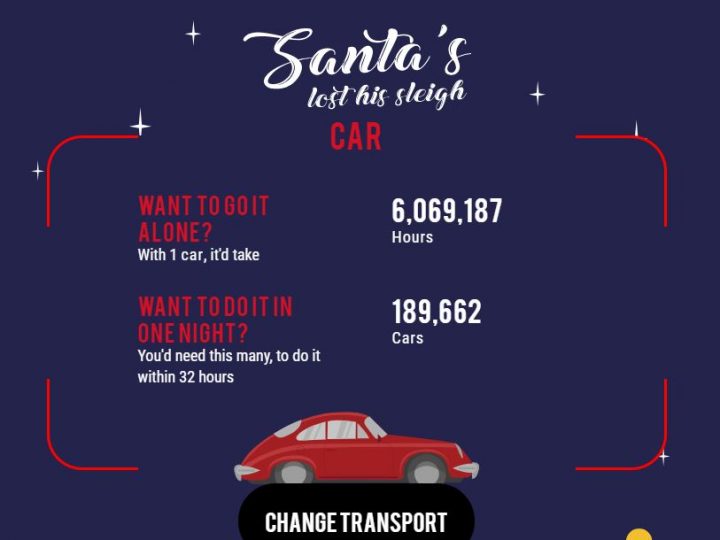 It’s a good job Santa has his magic sleigh, because if he was to rely on normal methods of transport, children around the world would be left present-less for an awfully long time.

TeamSport Karting has calculated the sluggish delivery times of each everyday mode of transport were Santa to trade in his vehicle for a non-festive alternative.

With 2.2 billion children across the planet spread between 916 million houses, Father Christmas has to travel a mammoth 424,843,108 miles to deliver gifts each year. This means his sleigh travels at over 13 million mph – more than 17,000 times the speed of sound.

To cover this distance and deliver the world’s presents by car, it was revealed that it would take a staggering 693 years, assuming Santa abided by the UK’s maximum speed limit of 70mph.

To speed up his delivery time he could go by plane, but despite a Boeing 747 cruising at a nifty 550mph, it would still take a miserable 88 years to get to every child’s house. Space rockets travel considerably quicker than commercial aircraft, but even if Santa was to commandeer a NASA shuttle, he’d still be flying for two years and nine months.

If he was concerned about the environmental impact of covering such colossal distances, Father Christmas could opt for greener modes of transport, such as cycling or walking. Such a moral standpoint would, however, sacrifice any hope of children receiving their presents this millennium.

Completing the delivery route by bike would take a slovenly 2,109 years, but if Santa was to walk, he would be delivering presents for a feet-busting 12,125 years.