You are here: Home / Featured / Green plates plan for EVs 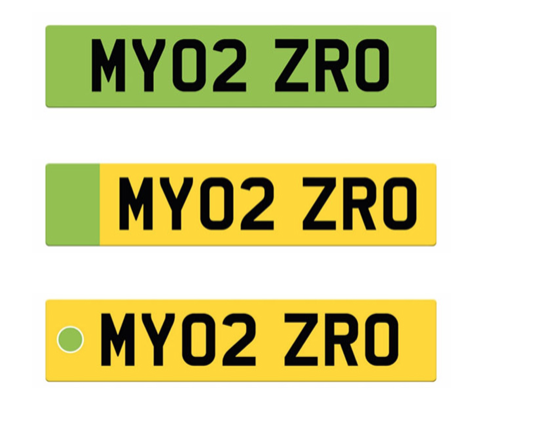 If green number plates are introduced to mark out electric cars, research from a Welsh insurer shows it will accelerate the take up of low emission models.

A large proportion of British motorists – over 8 million – are expected to make the switch to an electric or hybrid car in the next five years. This week, the DfT published its suggestions for the new style plates (see above).

Consultation documents from the DfT suggest it could follow Norway’s example with green plates to immediately indicate an electric vehicle which could be entitled to use bus lanes and free parking, Dan Hutson, Head of Motor at comparethemarket.com, said, “It looks like we will be seeing millions of green number plates on our roads in the coming years with consumers expecting to ditch fuel-based cars in favour of more environmentally friendly alternatives.

“The recent spate of high-profile climate change documentaries and summits has likely played a role in accelerating public opinion so decisively begins the electrification of motoring. The results of this poll vindicate the government’s decision to legislate to ban the sale of new petrol and diesel cars by 2040 and indicate that the benefits with which the green number plate is designed to assist – such as enabling local authorities to offer cheaper parking for zero-emission vehicles – will be meet with approval by drivers.”