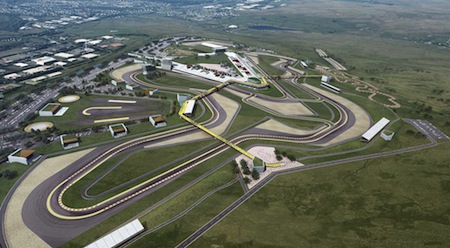 Circuit of Wales has been given two weeks to declare its major backers and show a revised business plan to Welsh Government.

He said there was concern at the long delays in reaching funding agreements and the lack of a timetable for getting the project built while costs had climbed to about £425 M.

The HVDC engaged a merchant bank to help find backers and earlier this month it was announced that the Extreme Sports Company would be a business partner and develop some of the 336 hectares available as a leisure sporting facility with themed accomodation.

But that is thought to be dependent on other investors coming on board with the project and for a proportionate amount to be under-written by Welsh Government.

The project developers had wanted public money to guarantee the original investment by Aviva insurance, but this was rejected in Cardiff Bay and CoW told a 50/ 50 funding was more likely.

That meant CoW has to secure approximately £200 M from its backers or own resources and it has been said that is a lot in the current financial climate and for a venture of this type which is up against other circuits in the UK.

It’s keenest competitor would be Silverstone, home of the British GP, but that is struggling to make itself pay and the purpose-built Rockingham Circuit in Leicester has never achieved the crowds it expected.

On the motor sporting calendar there are considered to be too many circuits chasing too few championships with diminishing spectator numbers due to high prices. Long established smaller circuits with lower overheads are just about keeping going.

CoW has always maintained it would not just be a state-of the-art race-track capable of hosting MotorGP and all forms of two or four wheeled motorsport up to F1 level, but that it would be a centre of excellence for advanced engineering research in the automotive sector, a leisure destination and provide thousands of jobs in all.

Two niche car makers and another automotive business have been rumoured to be interested in CoW as a manufacturing or test facility.

Officials from CoW have been talking to Welsh Government in a bid to narrow the funding gap and they also want a speedy resolution to the bid so they can start building works as soon as the weather improves and open the circuit within two years.