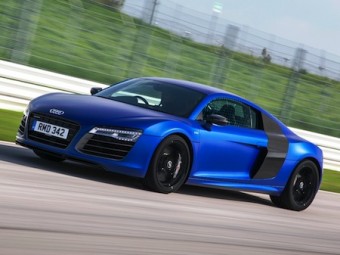 The R8 supercar with Coupe and Spyder body options is very much a niche product in a niche area of the market.

Around 300 units a year are available to the UK market.  The Coupe version accounts for 70% of these sales and 92% of all R8s sold in the UK will have the new S tronic twin clutch auto transmission which marginally reduces CO2 emissions and speeds up the zero to 62mph acceleration time by 0.3 seconds.

It is much faster acting literally firing in the gear ratios seamlessly.  A big improvement in refinement over the old automated clutchless manual system. Combining the V10 Plus power with the quickshift transmission gives staggering performance but remains flexible to use for everyday driving.

The latest R8 range has the Coupe with normally aspirated direct injection petrol engine options of  4.2-litre V8 FSI 430PS, 5.2-litre V10 FSI 525PS and the same unit known as V10 Plus with 550PS of power.

All are available with the choice of a 6-speed manual or the new 7-speed auto gearbox and all have that all-important quattro all-wheel drive system as standard.  Prices range from £92,710 up to £128,710.  Top speeds range from 187 to 197mph depending on the engine chosen.

Quickly skipping through the cosmetic changes, the R8 with its weight-saving aluminium body with some composite components and a space frame structure has a new grille and bumper and the V10 versions have a glass-fibre reinforced polymer (GFRP) front splitter.  All models now have LED headlights as standard.

The iconic V10 Plus engine, that is visible through the rear window, is illuminated by LEDs. Readers might remember this latest engine was the subject in the Audi R8 V10 Plus mid-engine bay television commercial with its quickfire acceleration, blipping gearchanges and over-run images, but more importantly for petrol-heads was the soundtrack to the commercial.

LED lights also dominate the rear of the R8 and it has a repositioned diffuser which in the V10 Plus Coupe is also made from GFRP. In all engine versions the exhaust system terminates in two round, glossy tailpipe trim sections, painted black on the R8 V10 Plus.   This model has 19-inch, 5-spoke alloys as standard. 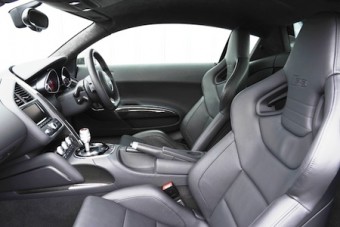 Inside the latest version the R8 badge appears on the gearshift lever, in the door sill trims, in the instrument cluster and in the start screen of the on-board monitor. In the R8 V10 plus it also appears on the flattened rim of the leather-covered multifunction sports steering wheel.

The instrument cluster itself has been reworked, the gear shift paddles have been further improved and new chrome inserts have been added in several areas. The centre console, the surround for the radio/navigation system and the handbrake lever are also now covered with stitched leather. On the downside owners will still have to pay an extra £225 if they want cruise control added to the specification which is penny-pinching by Audi.

The V10 Plus 5.2-litre FSI Coupe’s petrol engine develops 550PS, (543bhp) and maximum torque of 540Nm (398lb ft) at 6,500 rpm. It is a naturally aspirated, direct injection, four valves per cylinder, DOHC unit. This propels the Coupe version from rest to 62mph in 3.5 seconds and achieves a top speed of 197mph when linked to the S tronic transmission. Official Combined Cycle fuel economy is 21.9mpg and on my legal – but spirited test drive around the North Cotswold roads the real-life figure was 19.1mpg.

Unfortunately the 299g/km of CO2 emissions means VED road tax for the First Year rate is a huge £1,065 reducing to £490 for year two onwards.

Ceramic disc brakes are standard on the V10 Pus model and thankfully they are really progressive but powerful with good feedback through the pedal.

For the R8 V10 Plus the springs, shock absorbers and front suspension geometry have been specially tuned and adapted from their motorsport experience. Audi magnetic ride adaptive damping is standard for the V10 models and optional for the V8 variants.

It offers a normal mode and a sports mode and the power steering delivers firm but precise and sensitive feedback.  In normal mode the V10 Plus is stunning, in sports mode its brutal but relatively controllable thanks to the quattro grip.

With the all wheel drive, mechanical differential lock and traction control the grip levels are immense and being a mid-engine layout the balance is more or less perfect.  Having just had a week of driving the new F-Type Jaguar I have to say the latest Audi R8, even in its 4.2-litre specification, leaves the Jag standing.

This is not just in terms of speed or acceleration but more importantly in terms of road gripping performance and composed ride control. The quality of the updated interior of the latest R8 is hugely better than the F-Type.  However the F-Type has price on its side but in real-life for the type of affluent people who buy these supercars price sensitivity is not the most important consideration. Performance and brand image are more important.

With lower Euro 6 emission levels due in 2015 I wonder just how long Audi can keep their extreme performance engines like the petrol V8 and V10s available to us. For connoisseurs of high performance supercars it’s better to buy now than not at all in the future.

The R8 replacement will in due course have a lower CO2 emission power-source forced upon it by EU legislation, potentially a less antisocial hybrid unit with a smaller capacity turbocharged petrol engine. Just the same route as F1 has gone for 2014. But will it be as satisfying to own, drive or hear the wailing exhaust tone?  It will not. 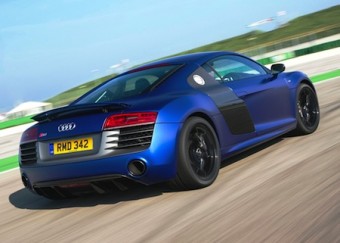 Against: Could be considered expensive, high taxes, paying extra for cruise control at this price is mean.