You are here: Home / Featured / Call for more professional standards by lorry drivers 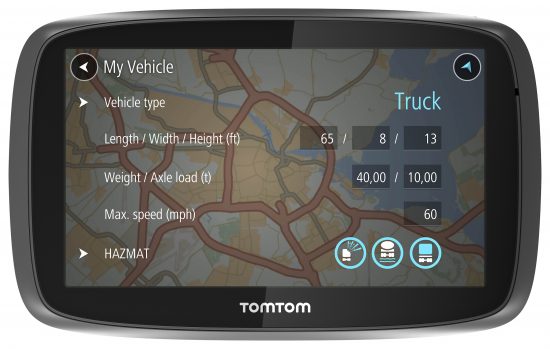 Lorry drivers and companies who cut corners on satnav technology are facing a new clampdown.

The Local Government Association (LGA) has called for all lorry drivers who use sat navs to be compelled to use commercial models following a “fresh catalogue of chaos on the nation’s roads”.

The Trucker sat nav from TomTom is designed to stop lorries, trucks and vans getting wedged down narrow country lanes – by diverting them away from unsuitable roads.

“Delivery drivers now have no excuse for causing disruption and damage in rural areas,” says a TomTom spokesman.

Prices start from ￡289.99 for the TomTom Trucker 5000 with a five inch screen.   A larger six inch version, the Trucker 6000, is available priced ￡339.99 from Halfords.  It can quickly be adapted for normal car use once the driver has stepped down from his cab.

Through award-winning TomTom Traffic and advanced routing technology, truckers get a realistic ETA based on vehicle profile and real-time traffic information.

The TomTom Trucker informs drivers about traffic and speed cameras on their route. ­ The information is displayed in the route bar on the device,­ making users aware of the position of speed cameras and also the back end of traffic jams.  These services are via a built-in SIM card, so there are no roaming charges.

The maps ­can be updated free of charge four times per year.  Other features include Advance Lane Guidance, which clearly shows which lane to take at junctions, and Speak & Go, which allows the driver to control the device with their voice.

♦  It’s not only satnav devices which can help as the AA Truckers’ Atlas is purpose designed to assist commercial operators with specific indications for road width, low bridges, weight limits and other useful data.