Registrations were 42.16% below the same month last year at 4,470 compared to 7,728 as the country was emerging from lockdown and buyers went on a spending spree.

It is the steepest fall of the UK nations and contrasted with a 29.5% drop for the country as a whole to the lowest July figure in 23 years and before the two-plate system started in a bid to boost sales. 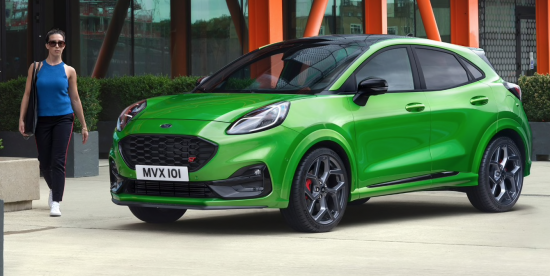 Nationally, Ford was the only manufacturer to attain double percentage points’ sales last month with 10.76% of registrations but only half of what they saw last year, while Volkswagen trailed on 8.93% and Audi came in third place with 6.87%.

The July performance was down -22.3% on the average recorded over the past decade, as the ongoing semiconductor shortage and the ‘pingdemic’ impacted on both supply and demand. As a result, this was the weakest July for new car registrations since 1998, prior to the introduction of the two-plate system.

The decline was predominantly within large fleets which, at 61,140 units, was some -28.7% lower than the average recorded over the past decade.3 Private registrations declined by a lesser extent, -10.7%, to 59,841 units.4

While the UK’s economic outlook continues to strengthen, with most consumer indicators suggesting a greater appetite for spending, including on so-called ‘big ticket’ items, supply challenges continue to throttle growth with the weaker market conditions expected to continue in August – traditionally a quiet month for registrations – before modest growth returns in Q4.

As a result, the latest SMMT outlook has been revised downward and now forecasts registrations to reach around 1.82 million units in 2021. This is still some 11.7% up on 2020, but down from the 1.86 million forecast in April, and down around -21.8% on the average new car market recorded over the past decade.5 More positively, however, given the continued strengthening of the electric vehicle market, SMMT now estimates that BEVs will account for 9.5% of registrations by year end, while PHEVs are forecast to comprise 6.5% of the market, collectively totalling around 290,000 units by the end of the year. 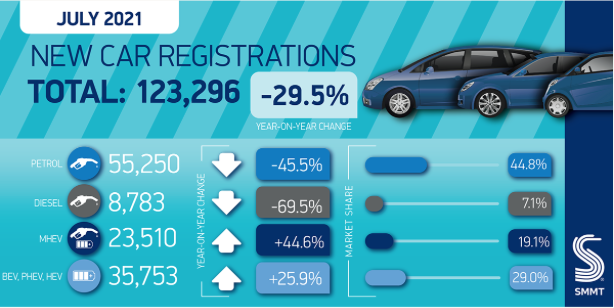 The 29.5% decrease in new car sales in July can be attributed to significant pent-up demand that was released when dealers reopened this time last year, after the first lockdown” said Sue Robinson, Chief Executive of the National Franchised Dealers Association.

New car sales decreased by 29.5% compared to the same month last year demonstrating the challenges with new car stock coming onto forecourts. In total 1,033,269 new cars have been registered to date in 2021. Battery electric vehicles rose by 17.4% and plug-in hybrid vehicles rose by 151.4%, in July. Registrations of diesel vehicles declined by 31.1%, with petrol vehicles increasing modestly at 0.8%. Private, fleet and business registrations were all down from 2020 levels.

Sue Robinson added, “Given the headwind we are witnessing in relation to vehicle supply, as a consequence of semi-conductor shortages and factory closures, franchised dealers continue to perform resiliently.

“It is usual for consumer demand to wain slightly as we approach the important month of September. NFDA members still remain cautiously optimistic in their outlook for the remainder of the year.”

“A fast post-pandemic rebound has not materialised, but the industry will be pleased with further spectacular growth in electric car sales, which made up almost a fifth of all new car registrations in July.

“The ongoing semiconductor shortage continues to cause huge disruption to UK production lines, and is likely to do so for the rest of the year and well into 2022.

“And with the ‘pingdemic’ afflicting many workers, some major manufacturers have now been struck by a staff shortage, as a steady flow of staff have had to self-isolate after being pinged by the NHS app.

“Dealers have been left in an impossible situation as car production has slumped. While there is potentially strong demand out there to buy a new car, many frustrated buyers are not willing to wait six to nine months, or even longer on some models, to take delivery of their new motor.

James Fairclough, CEO of AA Cars, said, “The reopening of the economy has given consumers plenty of ways to spend their free time, and although it’s disappointing to see car sales fall on an annual and monthly basis, it is not surprising considering that many people will be prioritising socialising and going out over shopping for a new car.

“The market is often quieter in the summer, but there are signs that consumer confidence is building as the economy bounces back, and there are reasons to be optimistic that drivers will soon be returning to forecourts in greater numbers.

John Wilmot, CEO and founder of car leasing comparison website LeaseLoco, added, “Semiconductor and staff shortages are causing major disruptions to UK car production lines and have thrown a spanner in the works as the UK motor industry looks to rebound from a torrid 18 months.

“When car production does start to crank up, the industry has a great deal of work to do to regain the trust of customers who have been frustrated by long delivery times and may have lost faith in the new car market.

“July figures also show just how important electric and hybrid sales will be if any rebound is to have substantial momentum behind it. Plug-in sales remain the light amongst the gloom and continue to show the path to recovery. 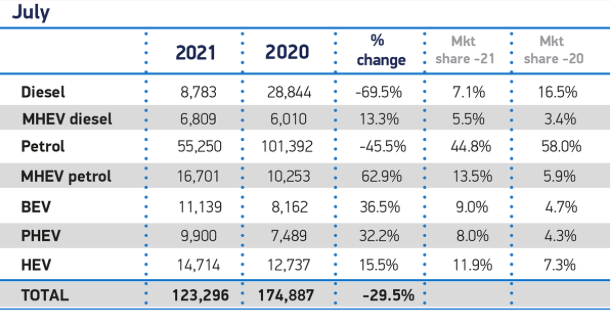 The slowdown is particularly bad and looking worse for diesel cars.

Data from New AutoMotive, a transport research group supporting the uptake of electric vehicles in the UK.

“In July 2019, 96% of new cars were either petrol or diesel. Now, just over half of new cars bought are petrol, and we expect diesel cars to become a niche part of the market by the end of the year.

“We also see a continued and worrying growth in hybrid sales. Hybrids are not net zero vehicles, and we are concerned that customers are paying over the odds for a technology that will soon be outdated. This is further evidence that the UK needs a strong California-style system that enables people to access the benefits of fully electric vehicles.”

Vauxhall is the UK’s the best-selling electric Light Commercial Vehicle manufacturer, according to the SMMT.

Vauxhall sold 1,560 e-LCV’s year-to-date and is now one of the few manufacturers able to offer fleets and business customers an electric van across its entire LCV line-up, following the announcements of its All-New Movano-e large van and the All-New Combo-e compact van.

Sales success so far this year was underpinned by the multiple award winning all-electric Vivaro-e, the best-selling model year-to-date in the a e-LCV sector.