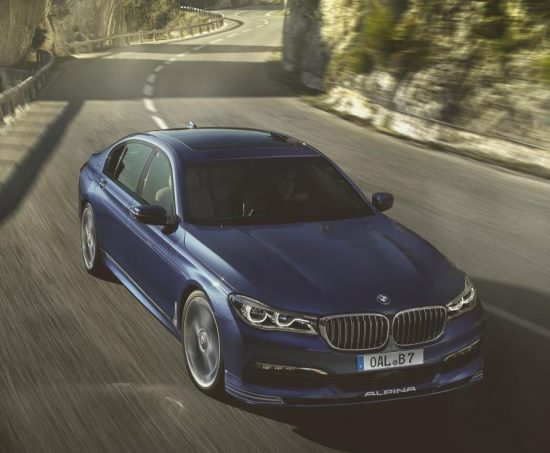 Alpina’s new super-saloon is now available in the UK with a final specification that pushes top speed to 205 mph, up from the 193 mph predicted at the Geneva launch.

“Not long ago, only the most focussed £million hyper cars could touch 200 mph. Where road conditions allow, owners of the new B7 Bi-Turbo can cruise long distances at that legendary speed. with friends and family in considerable comfort,” says Alpina GB brand manager Gary Lott.

“Remarkably, Alpina achieved this alongside superb ride quality and refinement at lower speeds, and all for just £115,000.”

To help achieve this impressive combination of performance, comfort and driving dynamics, Alpina’s 70-strong engineering team has received exceptional access to BMW design data and technical facilities as part of a relationship that reaches back to 1964, when BMW endorsed the quality of Alpina products by awarding the full factory guarantee to BMW vehicles fitted with the new Alpinadual carburettor system.

At the heart of the new B7 Bi-Turbo is a heavily-revised, direct injection V8 breathing through two specially-developed, twin-scroll turbochargers located between the cylinder banks, operating in parallel to deliver up to 1.2 bar with minimum inertia.

Together with additional radiators, the system ensures the thermodynamic stability of the V8 Bi-Turbo engine at all times, even under the highest sustained loads and most aggressive ambient air temperatures.

Additional cooling has been directed towards the eight-speed transmission while ride and handling has been retuned as well.