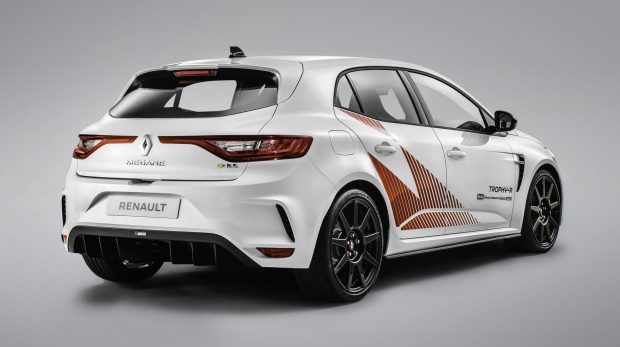 They are the ultimate Renault Megane models and just 32 are coming to the UK priced between £51,000 and £72,140, with the option to spend even more.

Renault Mégane R.S. Trophy-R recently broke the front-wheel drive lap records at both the tortuous Nürburgring in Germany and the sensationally fast Spa Francorchamps in Belgium.

Limited to just 500 examples globally, with 32 coming to the UK, and fitted with many bespoke, lightweight parts, prices for the Mégane R.S. Trophy-R start at £51,140 OTR. In addition, Renault has also revealed optional Carbon Wheel and Nürburgring Record packs, which bring a host of upgrades aimed at further enhancing the Mégane R.S. Trophy-R’s already scintillating performance.

Powered by a 300PS turbocharged 1.8-litre engine with a six-speed manual gearbox, all versions of the Mégane R.S. Trophy-R feature bespoke performance parts engineered in cooperation with key partners, including Akrapovič for the exhaust system, Brembo for the brakes, Bridgestone for the tyres, Öhlins for the shock absorbers and Sabelt for the lightweight bucket seats.

With a reduced weight of 130kg over the standard R.S. 300 Trophy, the Trophy-R is identified by its unique mother-of-pearl paint finish and red highlights as well as carbon composite bonnet, carbon rear diffuser and Fuji Light 19’’ alloy wheels wrapped in Bridgestone Potenza S007 tyres developed specifically for Renault Sport. 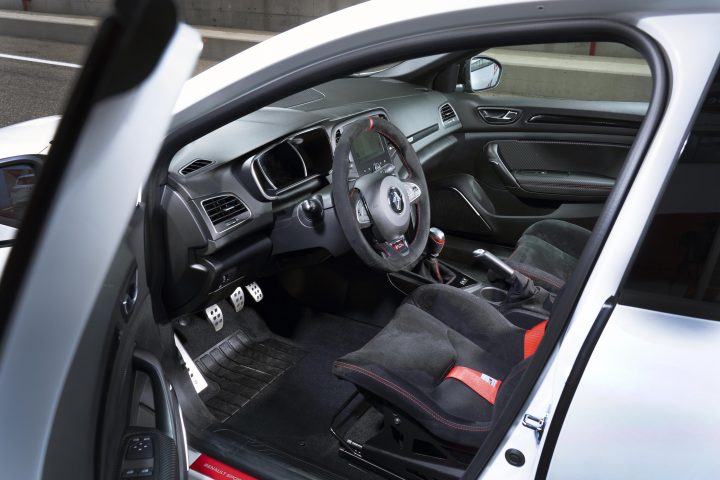 Inside is a stripped-out interior that features a pair of composite Sabelt one-piece seats, an Alcantara covered steering wheel and 7-inch R-LINK 2 infotainment complete with R.S. Monitor, which allows in-depth access to performance data and telemetry.

The removal of the rear seats means the addition of a special luggage retention net that’s secured to the strengthening strut between the rear suspension towers. Under the skin is a totally bespoke suspension system featuring revised geometry and Ohlins adjustable dampers, bi-material front brakes and an Akrapovič titanium exhaust.

For the ultimate Mégane R.S. Trophy-R experience, the £72,140 Nürburgring Record Pack version brings the car up to the same specification as that driven by Renault Sport test driver Laurent Hurgon on his record-breaking laps. In addition to the carbon wheels, customers also get a carbon ceramic front braking system – another first in this class.

Featuring larger 390mm discs and gold finished Brembo calipers this set-up provides unrivalled stopping power. On top of this, there’s the dynamic air intake, which replaces the R.S. Vision 4 lighting in the lower bumper. Not only does this unit save 2kg in weight, it provides both better cooling and breathing for the engine.

All versions of the Mégane R.S. Trophy-R can additionally be specified with several R.S. Performance upgrades, including a lightweight lithium-ion battery that saves 4.5kg, six-point harnesses for the Sabelt seats and an accessory ducting pipe for the dynamic air intake that feeds straight into the engine’s intake system.