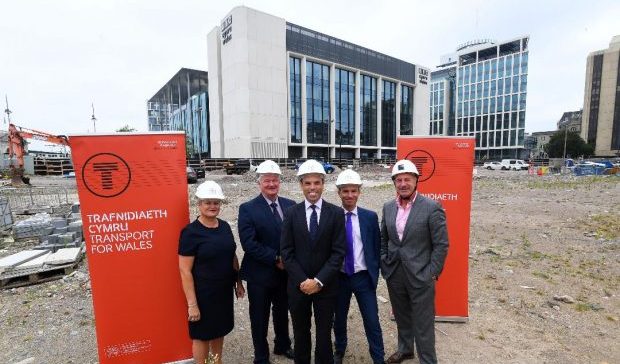 The bus interchange operated by Transport for Wales will have bays for 14 buses and coaches on the north side of Cardiff Central railway station, and there are plans for future developments to the south, which will see the creation of an additional 4 bays within the Cardiff Central station complex.

It is smaller than the previous bus terminal of 34 stands which closed in August 2015. The project has over-run expected completion and been subject to renegotiation of the development with services pushed to outlying areas of the city centre and caused congestion during major events at the adjacent Principality Stadium. It’s expected completion date is in 2023.

As part of the development, on street bus stands for local services which do not terminate at Cardiff Central, and which would otherwise have their journey times extended by entering the station, will also be upgraded so that they have the same look and feel as the bus station, for example by including the bus station’s information services, wayfinding and design.

Combined with the £58m announced last week by UK Government for the railway station, the £40m already pledged by City Deal partners and £15m from TfW Rail, this amounts to a funding package of around £150m from the public sector and transport providers for the new interchange.

Matched by significant funding from the private sector, not least of all Legal and General, hundreds of millions of pounds will be invested in creating a multi-modal transport interchange at the core of the Metro.

At more than 500,000 sq ft the new bus interchange is the largest privately funded development in Wales and will comprise not just the replacement Bus Station but also 318 Build to Rent apartments and 100,000 sq ft of grade A office development.

Announcing the deal, Economy and Transport Minister Ken Skates said, “Bus, Rail and Active Travel are core components of our bold ambitions for the Metro. This Welsh Government supported investment in the Cardiff Central bus interchange will be developed alongside, and work seamlessly with, Wales’s busiest railway station to form a fully integrated passenger experience at the heart of our capital city.

“And this is only the first phase of the redevelopment of Cardiff Central. Our partners in the City Deal have set aside £40m for future developments, with our continued partnership with the private sector marrying transport, residential and work spaces and developing a new identity for this crucial entry point to Cardiff.”