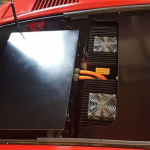 Classic cars are being given a new life for the 21st century with a “heart” transplant and an electric powertrain by a Welsh enthusiast and engineer. Richard Morgan set up Electric Classic Cars in Newtown to give much-loved classics and popular cars a new lease of life with a modern twist. “I use to compete in the British Historic Rally Championship while I worked as a software engineer in … END_OF_DOCUMENT_TOKEN_TO_BE_REPLACED

The opening of the Newtown Bypass will be a “momentous occasion” for Mid Wales, according to the Shadow Minister for Economy and Transport, and Montgomeryshire Assembly Member, Russell George. Thursday 14 February will see the long awaited opening of the Newtown bypass, over 70 years after the need for a bypass was first suggested. In March 2011, over 30 people joined Russell George in handing … END_OF_DOCUMENT_TOKEN_TO_BE_REPLACED

Transport Minister Edwina Hart says construction work on the £53m Newtown bypass will start on Monday, 7 March. The 6.5km bypass will follow a west to east route to the south of Newtown and has been designed with a 2+1 carriageway for alternate overtaking.   Five Cardiff taxi drivers have had licences suspended for refusing short distance journeys. An investigation by the city … END_OF_DOCUMENT_TOKEN_TO_BE_REPLACED